The latest addition to my virtual shelf this time, came about as the result of a lovely email I received from author Barbara Copperthwaite, requesting a review and promotion for her new crime thriller, ‘Flowers For The Dead’, which is due to go on general release next week.

Having now become acquainted with Barbara via Goodreads and her own dedicated website, I see that I have not one, but two excellent books to read, as her debut novel, the psychological thriller ‘Invisible’, just sounds too good to resist (click on the image to find out more) 🙂

‘FLOWERS  FOR THE DEAD’

ADAM WILL DO ANYTHING TO MAKE YOU HAPPY. EVEN IF IT KILLS YOU.
Adam Bourne is a serial killer who thinks he is a saviour. When he murders young women and cuts off their lips, he believes he has done it to make them happy.
How did he become warped from the sensitive four-year-old who adored his gran and the fairy tales she read to him? What turned him into a monster who stalks his victims? And what is he trying to say with the bouquets he sends?
When he meets Laura Weir, Adam weaves a fairy tale romance around them. A tale she has no idea she is part of. As he hatches his twisted plan for their fairy tale ending, can anyone stop him before he creates the ultimate sacrifice to love? 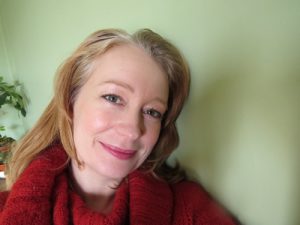 Barbara Copperthwaite was raised by the sea and in the countryside, where she became a lover of both the written word and the great outdoors.

A journalist with twenty years’ experience, who has been editor of a number of national magazines in the UK, her fascination with crime really began during a brief spell working in a men’s prison in her early twenties.

It continued throughout her career as a journalist, as she interviewed both victim and perpetrators, and this knowledge is what inspires her novels.

When not writing feverishly she is often found hiding behind a camera, taking wildlife photographs while her dog, Scamp, waits patiently by her side.

Catch up with all Barbara’s latest news on her website