‘House Of 8 Orchids’ probably isn’t the kind of thriller I would typically be drawn to if I was bookshop browsing, however I find myself strangely intrigued by the premise, drawn into a world of which I know relatively little and eager to read on … so here goes! 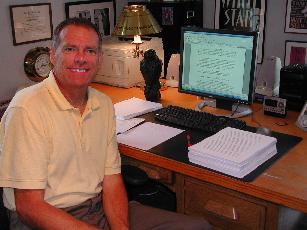 James Thayer is the son of an eastern Washington farmer and his wife is a Phi Beta Kappa graduate of Washington State University and of the University of Chicago Law School.

He teaches novel writing at the University of Washington extension school, where he received the 2015 Excellence in Teaching Award in the Arts, Writing, and Humanities.

James  is the author of thirteen critically acclaimed novels, which have been translated into all major European languages, Japanese and Chinese.  He has recently ventured into the world of non-fiction, publishing a manual for aspiring novelists, ‘The Essential Guide to Writing a Novel.’

When not writing, James enjoys running and has completed more than 30 years of running 20 or more miles a week. He has competed in a marathon (actually, he says, it was two marathons; his first and his last) and many 10 and 12 kilometer races.

He plays bass for a garage band, The Toneheads.  What the band lacks in talent, it makes up for in volume.

James lives in Seattle with his wife and two daughters.

Keep up with all the latest news at James’s website

If in the first chapter a hurricane is going to blow down an oak tree which falls through the kitchen roof, there’s no need to first describe the kitchen.