“On Writing Tearagh’t”
A Guest Post By Craig Newnes

When the lovely Sue from ‘The Real Press‘ contacted me, I’m not sure what drew me to this book the most, making me venture out of my comfort zone in agreeing to review it.

The title was certainly intriguing and gave me the opportunity for some added research, which I always enjoy.

The story line was taken from an era of history about which my existing knowledge is very limited, so discovery made me keen to continue reading.

The language and narrative, whilst it looks to be quite challenging, will also be unique and as the book is not too long, should not become tiresome.

Last, but not least, the fact that for author Craig Newnes, this book is such a complete divergence from his previous publications that I just need to know how it all works out and how well he can adapt his style of writing from fact and academia, to popular fiction.

So without further ado, it’s over to you Craig… 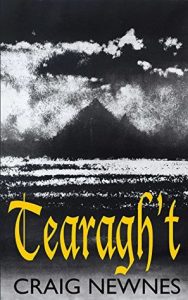 “Falling in love isn’t in your control. It’s a wonderfully accurate phrase, isn’t it? You fall, with amazing luck, you both fall into it. It’s like a bottomless, heavenly well. You both tumble, then plunge. Down and down. Holding hands … but luck never holds you. One day, one of you hits the side of the well. The other keeps falling, always hurting – knowing your souls are no longer bound, no longer one in this life. That somewhere, far above you, lies the broken body that can only be touched now in dreams.”

Thysse message is o’er long. It doth comprise two main parts, a briefe note from one of mie oarsmenne on the findinge of the Spaniartt’s papers and the translat’d papers themselffes. These are in onlie part sensible order as the oarsman had yet to right them and the manne that translat’d the Spanish writinge simplye retold the tale in the order receiv’d. The originale paperes have disapper’d thysse xi daie of September 1589. They were soak’d butte legible and found bound at the stern of a small craft adrift in the baie call’d Coumenole.

The baie is rough of seas as are all these parts but once trapp’d by the tide any vessel doth circle against the sands until the tide turns. The water’s edge is easily reach’d from the cliffes and mie man hath some strength. He caught the boat, gain’d the papers and sent them for translation that very daie. He has since sent them to me with hysse note attach’d, in case there was newes of  Felipe’s plans.

Hi! I am CRAIG NEWNES 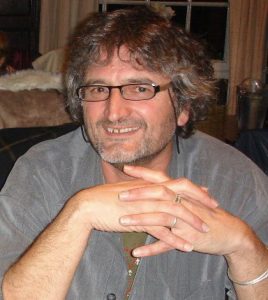 I am an author, editor, musician, dad and gardener.  Until retiring after a near-fatal road accident I was a Consultant Critical Psychologist and ex-Director of Psychological Therapies for Shropshire’s Mental Health (NHS) Trust.

I have published numerous book chapters and academic articles and I am editor of The Journal of Critical Psychology, Counselling and Psychotherapy.

Clinical Psychology: A critical examination from PCCS Books and the edited volumes:

This is Madness: A critical look at psychiatry and the future of mental health services;

This is Madness Too: A further critical look at mental health services.

Inscription, Diagnosis and Deception in the Mental Health Industry: How Psy governs us all. (Palgrave Macmillan: 2016)

A book on the Malaysian Emergency and a Critical A-Z of ECT are due in 2018.

Tracks from my band Sandghosts are available from Amazon.

Dunquin is unremarkable as you approach, apart from the extraordinary views over the Atlantic. On blustery days you can see four or five storm systems and the curve of the earth. It lies on the Dingle Peninsula not far from Coumenole beach, where Ryan’s Daughter was filmed. 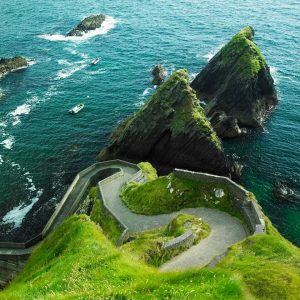 The pub, of course there’s a pub, has photographs of Sir John Mills and the cast drinking Guinness and enjoying the craik. There’s a fine restaurant where I was once served by a man in his nineties whose grandmother had been born in 1796 – really. His mum had lived on the Great Blasket, an island cleared of its ageing population in 1953, but a place with a literary history second to none. Millions of books describing the hazardous life of the islanders have been sold since Tomás Ó Crohan wrote The Islandman, in Irish, in 1929. Born in 1856, O Crohan lived on the island until his death in 1937.

In my 64 Ways to Change Your Life (a volume comprising one line per page), visiting the Great Blasket is high on the list.

To the west of The Blasket lies Tearagh’t. The fact you can see the mainland from there, but reaching it is potentially lethal, may make it the loneliest place on earth. 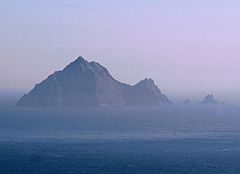 But Dunquin has something else; an ancient church and graveyard. In the graveyard lies the grave of the fourteen year old son of the Santa Maria de la Rosa. The ship went down in the treacherous Blasket sound in 1588 and the boy, the only survivor, was tortured to death by the English seeking information. He had none; most of Felipe II’s Armada had either sunk or gone off course and was heading south for Spain. There had to be a story in there somewhere – after all, there are already two novels simply called “Armada.”

So, I started writing; recording conversations and converting them to a version of Elizabethan English, visiting Vigo fish market at five in the morning, noting down menus and other script on the walls of pubs in London and Dartmouth, remembering people I knew from holidays around Slea Head – Padraig used to run a Dingle pub. But what to do for a central tale? The characters came easily; the men are mostly versions of me; writers, peacocks, animal-lovers, gardeners, fathers. Isidore is, I think, a man many aspire to be, loyal, brave, observant. But he has at least one flaw, he thinks being a man must involve adventure.

My grandmother is in the book, Jewish and shocked at the behaviour of her husband. It was said that my grandfather had two families in Greece as a result of his exploits in the Merchant Navy. If it’s a myth, it’s also true for countless families.

And the reason for writing? When my eldest daughter’s mum died I promised her I would live forever – and writing is the closest any of us will get.

Written by Yvonne
“The Demon In The Circle”
A Guest Post By R.L. (Robert) Bartram
FacebookTwitter
New On My Shelf This Week