Hopefully you will have stopped by a couple of days ago, to check out my review of this 5 star rated, highly emotional and beautifully written book.

I have since been contacted by the book’s author, Madeleine Van Hecke, who would like to share with you a supporting essay she has written, which focuses on the tension between wanting to protect both one’s own privacy and the privacy of the people whose stories have influenced one’s novel, and the (to her) undeniable fact that an author’s novels can’t be authentic unless they draw from their own lived experiences and those of others who have shared their stories with them.

Madeleine elected to have her Guest Post published post review, in anticipation that the review would provide a little more context for the essay helping it to pique more interest in any unanswered questions and observations, arising from the storyline.

If you missed the post, my review is available here

If you consider, as I do, that Once You Know would be a good choice for a book club discussion, you might be interested in checking out this suggested ‘discussion guide‘ which Madeleine has put together

ONCE YOU KNOW by MADELEINE VAN HECKE

Feisty, Irish-Catholic Colleen Moretti thrust the letter into the back of a drawer. Her plan: ignore the fault line until the tremors pass. But her husband’s betrayal is far worse than Colleen suspects.

In this complex story of a family unravelling, both Colleen and her college-age daughter Rachel struggle to maintain their balance amidst feelings of love and loss, anger and betrayal. A gifted cellist, Rachel escapes into her music and her campus life, including her burgeoning romance with her first real boyfriend. But her coming of age tale is fraught with complications from what’s happening in her family. In her desperation to sustain hope, Colleen turns a blind eye to Rachel’s struggles. Instead, she clutches to her faith that preaches forgiveness and to the tender memories that preserve her image of the man she has known her husband to be. Mixed in this soup is eight-year-old Izzy, whom both Colleen and Rachel try to protect from the fallout of this conflict.

With two daughters caught in the middle of a crumbling marriage, one who would love to see her father cut out of their lives and the other who would be crushed to lose him, Colleen is trapped in a no-win situation. Colleen finally realizes she can’t save her daughters, her marriage, and herself, so… who will she choose? 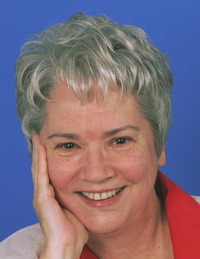 And a game inventor (Wicked Words)

Behind the scenes… I have been a closet fiction writer, now able to use my retirement years to study the craft of novel writing intensively.

In my personal life… I am a widow who still wears her wedding ring and her husband’s old flannel shirts on cold winter mornings. Greg Risberg, the love of my life who made me laugh nearly every day, died in 2014. My children and grandchildren are the great joys in my life.

Once You Know is my debut novel.

Keep up to date with all the news on my website

“Any Resemblance Is Entirely Coincidental” – Really?

I was in my first week as a psychology intern when the head of our program told us a story to illustrate just how fragile the promise of patient confidentiality can be. All the people who participated in the various therapy groups that met at our clinic were required to agree to keep confidential anything that any member revealed at a meeting. But one evening, distressed at hearing one woman’s tragic story, one of the men in the group went to a nearby tavern and divulged to interested listeners what had upset him. After all, he reasoned, he never mentioned the woman’s name or any other identifying characteristics such as her race or age or occupation. But among his companions was a colleague of the woman who knew that she also attended Tuesday night group therapy meetings at our clinic. It took only one or two other inconsequential details for the stranger to conclude that his colleague and the woman being described in the bar were one and the same person. This made him privy to intimate details of her life that she herself would never have disclosed in her work setting.
..
The leader of our program told us the story to stress how carefully we must guard the confidentiality of our clients. I took this obligation very seriously during the relatively brief time that I saw people in therapy. I also brought it to my professional life as a teacher and to my personal life. When students and friends confided in me, their stories stayed private. Fast-forward some decades, and I found myself able to pursue my passion for fiction writing in retirement. But so much of what I wanted to write about was inspired by my own experiences and the struggles of others who had told me their stories. Could I write about those without betraying confidences?
..
The concern about revealing one’s sources inspires passionate discussions at writers’ conferences around the question: “What should I do if/when my friends/relatives recognize themselves in the pages of my novel?” Fiction authors have long dealt with this by issuing a blatant denial in the front pages of our books: “Any resemblance to actual events, locales, or persons, living or dead, is entirely coincidental.”
..
Really? It’s as if we want to say that there’s no relationship between any of our lived experiences and the fictional lives of our characters. But how could that be? How could we create living, breathing, relatable characters without drawing upon our own life experiences and those of people we have known? Moreover, in today’s world where people thirst for transparency and readers search for authors who have “authentic voices,” how can we claim to provide those voices and at the same time deny having the experiences that make authenticity possible?
..
Once You Know is a story about family trauma. In writing it, I found myself smack-dab in the middle of this tug-of-war question. How could I draw on the real experiences people had confided to me and still protect their privacy? In the end, I found that the very process of writing did lead me to profoundly reshape the characters and incidents in my novel in ways that would make them less recognizable. In fact, the snippets in which I’d remained most true to actual conversations or events, often turned out in early drafts to read as the least believable because they didn’t arise organically enough from the work I was creating. “Fictionalizing” was not the painstaking effort I’d anticipated, but a natural outcome of the creative process. On the rare occasions when I wanted to include details that could be potentially revealing, I returned to the people who had confided in me and obtained their permission to do so.
..
Now that Once You Know has been published, I realize that it is readers’ questions about the novel that bring me face to face with the dilemma. The first question readers often ask is “What made you write this story?” And underneath that question is the very natural human curiosity that wonders how much of any story is based on the author’s lived experience. Sometimes the question also comes from readers wanting to know if the author’s voice is trustworthy, “authentic” because it is rooted in one’s own experience. Is my voice in Once You Know “authentic”? The most honest answer I can give to that question and still protect my own privacy is that it is less authentic than some readers might wish it to be, and far more authentic than I wish it was.
..

“Like a symphony, a novel is incredibly complex. It has so many moving parts and blends different character voices.”