More and more books are landing in my mailbox courtesy of the new relationship I am forging with Midas PR and their lovely team. This copy came via the great folks at Netgalley, through my pre-approved status via Head Of Zeus

As this new arrival put me under a little pressure with today’s Blog Tour date, I am featuring Second Sister in my Mailbox Monday meme, and also sharing a Blog Tour extract, which I hope you will enjoy! It is a little lengthy, but I’m sure that once you have read it, you won’t be able to resist searching out a copy of the book! A full list of the Blog Tour sites to visit can be found at the end of this post! 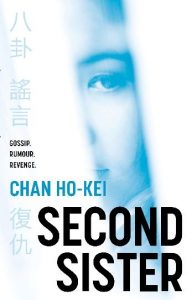 Chan Ho-Kei’s The Borrowed was one of the most acclaimed international crime novels of recent years, a vivid and compelling tale of power, corruption, and the law spanning five decades of the history of Hong Kong. Now he delivers Second Sister, an up-to-the-minute tale of a Darwinian digital city where everyone from tech entrepreneurs to teenagers is struggling for the top.

A schoolgirl—Siu-Man—has committed suicide, leaping from her twenty-second floor window to the pavement below. Siu-Man is an orphan and the librarian older sister who’s been raising her refuses to believe there was no foul play—nothing seemed amiss. She contacts a man known only as N.—a hacker, and an expert in cybersecurity and manipulating human behavior. But can Nga-Yee interest him sufficiently to take her case, and can she afford it if he says yes?

What follows is a cat and mouse game through the city of Hong Kong and its digital underground, especially an online gossip platform, where someone has been slandering Siu-Man. The novel is also populated by a man harassing girls on mass transit; high school kids, with their competing agendas and social dramas; a Hong Kong digital company courting an American venture capitalist; and the Triads, market women and noodle shop proprietors who frequent N.’s neighborhood of Sai Wan. In the end it all comes together to tell us who caused Siu-Man’s death and why, and to ask, in a world where online and offline dialogue has increasingly forgotten about the real people on the other end, what the proper punishment is. 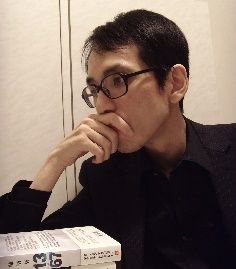 Chan Ho-Kei was born and raised in Hong Kong.

He has worked as a software engineer, scriptwriter, game designer, and editor of comic magazines.

His writing career started with the short story The Murder Case of Jack and the Beanstalk, which was shortlisted for the Mystery Writers of Taiwan Award.

He won the award the next year with The Locked Room of Bluebeard. Chan’s first novel, The Man Who Sold the World, won the Soji Shimada Mystery Award, the biggest mystery award in the Chinese-language world, and was published in five languages.

In 2014, Chan’s crime thriller The Borrowed was published in Taiwan. It has sold rights in thirteen countries, and the book will be adapted into a film by acclaimed Chinese art film director Wong Kar-Wai.

Second Sister has acquired a six-figure film deal with Linmon Pictures in China. The book will be published in the US in 2020 and rights have been sold to China, Korea and Japan.

If reading and writing in Chinese is your forte, then you can … 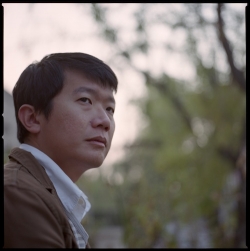 Jeremy Tiang has translated more than ten books from Chinese, including novels by Zhang Yueran, Yeng Pway Ngon, and Chan Ho-Kei, and has been awarded a PEN/ Heim Grant, an NEA Literary Translation Fellowship, and a People’s Literature Award Mao-Tai Cup.

He also writes and translates plays, including Xu Nuo’s, A Son Soon (Manchester Royal Exchange) and an adaptation of the classic text, A Dream of Red Pavilions that was performed off-Broadway earlier this year. Jeremy’s short story collection It Never Rains on National Day was shortlisted for the Singapore Literature Prize.

When Nga-Yee left her flat at eight that morning, she had no idea her whole life would change that day.

After the nightmare of the last year, she was sure better times were ahead if they just gritted their teeth and clung on. She firmly believed that destiny was fair, and if something bad happened, something good must naturally follow. Unfortunately, the powers that be love playing cruel jokes on us.

A little after six that evening, Nga-Yee dragged her exhausted body homeward. As she walked from the shuttle bus stop, her mind busily calculated whether there was enough food in the fridge to make dinner for two. In just seven or eight years, prices had risen alarmingly while wages stayed the same. Nga-Yee could remember a pound of pork costing twenty-odd dollars, but now that barely got you half a pound.

There was probably a few ounces of pork and some spinach in the fridge, enough for a stir-fry with ginger. A dish of steamed eggs on the side would complete a simple, nutritious dinner. Her sister Siu-Man, who was eight years younger, loved steamed eggs, and Nga-Yee often served this soft, silky dish when the cupboard was almost bare—a fine meal with chopped scallions and a dash of soy sauce. Most important, it was cheap. Back when their finances were even tighter, eggs got them through many a difficult moment.

Although there was enough for that night, Nga-Yee wondered if she should try her luck at the market anyway. She didn’t like leaving the fridge completely bare—her upbringing had left her wanting a backup plan at all times. Besides, quite a few vendors dropped their prices just before closing, and she might pick up some bargains for the next day.

A police car sped past, the siren piercing Nga-Yee’s thoughts of discounted groceries. Only now did she notice the crowd at the foot of her building, Wun Wah House.

What on earth could have happened? Nga-Yee continued walking at the same pace. She wasn’t the sort of person who liked joining in the excitement, which was why many of her secondary school classmates had labeled her a loner, an introvert, a nerd. Not that this bothered her. Everyone has the right to choose how to live their lives. Trying to fit in with other people’s ideas is pure foolishness.

“Nga-Yee! Nga-Yee!” A plump, curly-haired, fiftyish woman waved frantically from among the dozen or so onlookers: Auntie Chan, their neighbor on the twenty-second floor. They knew each other to say hello, but that was about it.

Auntie Chan sprinted the short distance toward Nga-Yee, grabbed her by the arm, and dragged her toward the building. Nga-Yee couldn’t make out a word she was saying, apart from her own name—sheer terror made her voice sound like a foreign language. Nga-Yee finally began to understand when she picked out the word “sister.”

In the light of the setting sun, Nga-Yee walked through the crowd and was finally able to make out the horrifying sight. People were huddled around a patch of concrete about a dozen yards from the main entrance. A teenage girl in a white school uniform lay there, tangled hair obscuring her face, dark red liquid puddling around her head.

Nga-Yee’s first thought was, Isn’t that someone from Siu-Man’s school?

Two seconds later she realized the still figure on the ground was Siu-Man.

Her little sister was sprawled on the cold concrete.

All the family she had in the world.

Instantly, everything around her turned upside down.

Was this a nightmare? If only she were dreaming. Nga-Yee looked at the faces around her. She recognized them as her neighbors, but they felt like strangers.

“Siu . . . Siu-Man?” Even saying her name out loud, Nga-Yee couldn’t connect the object on the ground with her little sister.

Siu-Man ought to be at home right now, waiting for me to cook dinner.

“Move back, please.” A police officer in a neatly pressed uniform pushed through while two paramedics knelt by Siu-Man with a stretcher.

The older paramedic held his hand beneath her nose, pressed a couple of fingers to her left wrist, then lifted an eyelid and shone a penlight at her pupil. This took just a few seconds, but Nga-Yee experienced every one of these actions as a series of freeze-frames. She could no longer feel the passing of time.

Her subconscious was trying to save her from what would happen next.

The paramedic straightened and shook his head.

“Please step back, clear the way please,” said the policeman. The paramedics walked away from Siu-Man, looking somber. “Siu . . . Siu-Man? Siu-Man! Siu-Man!” Nga-Yee pushed Auntie Chan aside and dashed over.

“Miss!” A tall police officer moved quickly to grab her by the waist.

“Siu-Man!” Nga-Yee struggled futilely, then turned to beseech the officer, “That’s my sister. You have to save her!”

“Miss, please calm down,” said the policeman in a tone that suggested he knew his words would have no effect.

“Please save her! Medics!” Nga-Yee, all color drained from her face, turned to implore the departing ambulance crew. “Why isn’t she on your stretcher? Quick! You have to save her!”

“Miss, are you her sister? Please calm down,” said the policeman, his arm around her waist, trying to sound as sympathetic as possible.

“Siu-Man—” Nga-Yee turned back to look at the broken figure on the ground, but now two other officers were covering her with a dark green tarp. “What are you doing? Stop that! Stop that now!”

“Don’t cover her, she needs to breathe! Her heart is still beating!” Nga-Yee leaned forward, her energy suddenly gone. The policeman was no longer holding her back, but propping her up. “Save her! You have to save her! I’m begging you . . . She’s my sister, my only sister…”

And so, on this ordinary Tuesday evening, on the empty ground in front of Wun Wah House, Lok Wah Estate, Kwun Tong District, the normally voluble neighbors fell silent. The only sound among these cold apartment buildings was the heartbroken weeping of an older sister, her sobs rushing like the wind into each person’s ears, filling them with a sorrow that could never be wiped away. 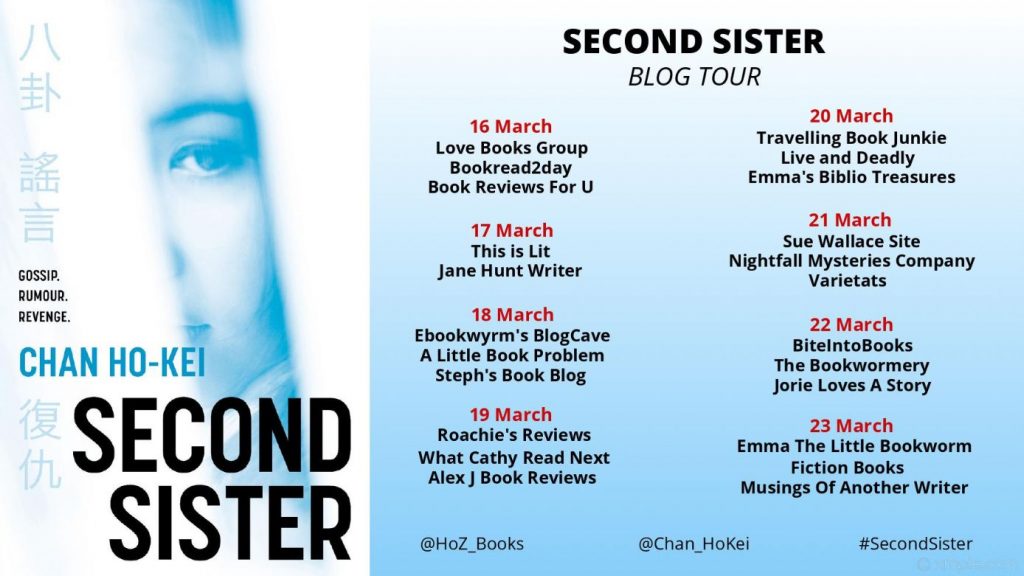