The lovely folks at Aria Fiction have once again allowed me automatic NetGalley acceptance for their March 2018 releases and I chose a couple of titles which caught my eye, agreeing to take part in both Blog Tours as thanks for the complimentary downloads.

I am partial to a good helping of historical fiction from time to time and my first choice reflects the lighter reading option I sometimes seek, although having said that, many of the social injustices and mores of the times can make for quite harrowing reading. 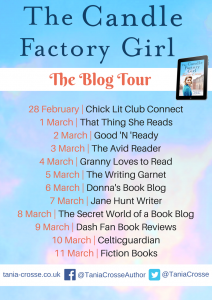 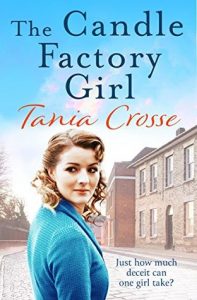 1930’s London – A backstreet saga full of hopes, dreams and the fight for survival. Perfect for the fans of Rosie Clarke and Lindsey Hutchinson.

Work at Price’s Candle Factory in Battersea is tedious for intelligent, seventeen-year-old Hillie Hardwick, but she knows she is lucky to have a job at all.

Her home life is no better, as she constantly battles with her exacted and bullying father in order to protect her mother and five younger siblings from his tyranny of abuse.

Her only solace is her loving relationship with the chaotic Parker family and her best friend, Gert Parker.

But could this be the biggest mistake of her life, and should she be looking for protection nearer home?

A story that crackles with unease where courage and friendship are the only hope. 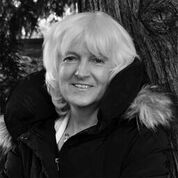 Hi! I am historical novelist, Tania Crosse and I was born in London, but at a very young age moved to Surrey where my love of the countryside took root. I always enjoyed reading and have composed stories ever since I could hold a pen.

After studying French Literature at university, I devoted twenty years to bringing up our three children. But my passion for writing never left me, and side by side with my in-depth research into Victorian social history, I began to pen my novels in earnest as the family grew up.

Many of you will know me from my series of ten exciting and dynamic Dartmoor novels that interpret local history in a vivid and evocative manner.

‘The Candle Factory Girl’ is a part of my new series of novels set in 1930s London and the South East, which take the reader through the Second World War.

Although a change of scene, I will still be writing in my own inimitable way, using engaging fictional characters to illustrate real historical events.

I enjoy rambling, gardening and photography. I love genealogy, and I am passionate about dancing and Irish music! Music in general forms a very important part of my life, and I find it inspirational when I am writing.

I have been happily married for forty years and would never have achieved my success without my husband’s support. We live partly in Berkshire and partly at our tiny cottage on Dartmoor, where I retreat to write and absorb the atmosphere of the places that inspire my.

I hate being catagorised as a writer of historical romance. The history comes first, and the human tales develop from my research. The characters lead harsh, demanding lives and their stories are often cruel and harrowing. ‘I tell it like it was.’

When I was asked to write in greater detail about the inspiration for The Candle Factory Girl, I imagined it would be an easy task. However, as I gave it more consideration, I realised that the thought processes involved were far more complicated. As a writer, creating a story is a natural journey. Real life events, memories, one͛ s own experiences of life twist and turn in the imagination until all falls into place, but to analyse how this actually happens can be a bit of an enigma. However, I will try my best.

I have never set a novel in London before. I know the capital a little, but I wouldn’ t say I know it well, despite being a Londoner by birth and having lived there until I was five. But my memories of where we lived are vivid if limited. I remember clearly the house and garden, the street and the park, Clapham Junction Station with the steam trains hissing and spitting, and even buying plastic toy farm animals at Jon Jax Corner. So, should I set a story in the street where we lived, Banbury Street in Battersea?

I felt drawn to the idea like a magnet, but exactly what would I write about? Sadly, the Victorian terraces on the opposite side of the street from where we lived were demolished in the 1970s, but I remember them as being similar to the streets all around, and I discovered in the local reference library an historic street map showing the outline of the houses as they would have been. I could imagine the way of life, but I needed to pull together a story with a down-trodden heroine. It was my brother, thriller writer Terence Strong, who suggested nearby Price’s Candle Factory. I had no memory of it, but being a few years older, he remembers the black smoke spewing from the factory chimneys.

I immediately delved into the history of Price’s, once the biggest manufacturer of candles in the world. First of all, I learnt how the factory declined after WW2, so that was what made me choose the 1930s for the period. Also, I couldn’t have my heroine being badly treated as a factory worker, since I discovered that from its very beginnings, Price’s had always been philanthropic towards its workers. But repetitive and stultifying for an intelligent young girl it might well have been. And when I saw an old photo of a vat of molten wax in the factory, my mind began whirling at the possibilities.

So if not abuse from the factory, it needed to come from closer to home. My own childhood was an incredibly happy one, but perhaps the stability of my own life allows me to be able to write about cruelty within the family. But I always like to have a reason why my darker characters are as they are, and this is where my imagination came into play together with my knowledge of historical events.

In one of my Dartmoor stories, Lily’s Journey, the heroine hails from London, and although I didn’t name it, in my mind, she had lived in Banbury Street in our house. In that earlier book, Lily loses contact with a childhood friend, and I had once thought of penning a sequel whereby we learn why this friend ‘disappears’. My idea was that, through no fault of her own, she becomes caught up with some gangsters involved in dodgy diamond dealing and the like. So why not use that as another thread to the storyline here?

Finally, romance. Yes, of course it has to be a major feature in a saga, but yet again, conflict of emotions is a necessity. Two men in the heroine’s life, but does she have to choose, does fate choose for her, or is it neither of those? You’ll have to read the book to find out!

So – the street; Battersea Park as much part of my characters’ lives as it was mine; Price’s; even the ‘banana arches’, (warehouses beneath the raised tracks along the back entrance to the station. Memories still haunt me of walking past on dark, misty evenings, clutching my mother’s hand, I remember that distinctly, it was so creepy that I shudder at the thought even now) – all jumbled up together and yet emerging as a logical and, I hope, compelling story for you to enjoy.

And if you do, guess what? My next novel is set in Banbury Street, too!