Thanks to ‘Head Of Zeus’ publishing representative, Blake Brooks, for inviting me on this Blog Tour. I have featured a couple of Lesley’s earlier books from this series and have the complete set in my TBR pile for my future reading. 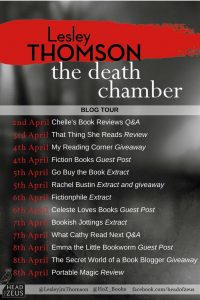 Upset, she heads home alone and is never seen again.

Now he must prove the man who led him there is guilty.

When Mercer’s daughter asks Stella Darnell for help solving the murder, Stella see echoes of herself.

With her sidekick sleuth, Jack, Stella moves to Winchcombe, where DCI Mercer and his prime suspect have been playing cat and mouse for the past eighteen years..

Clicking on the book title will link you directly with the book’s dedicated Goodreads page, where you can read all the reviews and ratings

I go to Winchcombe, a Cotswold village in Gloucestershire to write. In Winchcombe you feel like you’ve travelled back decades. There are fewer cars, the ancient sandstone cottages, half-timbered pub and a set of stocks outside the old town hall lend a timeless feel. There’s a butcher, a bakers, no candle stick makers, but a treasure trove of a hardware shop selling anything you’d ever need.

When I’m in Winchcombe it’s just me and Alfred, my poodle.  After a morning’s work, Alfred and I head into the surrounding countryside, down lanes, across fields, over stiles and along footpaths.  On one of these walks after a climb through dense woodland, I came across Belas Knap.

Belas Knap is an early Neolithic Long Barrow. In other words, a burial chamber. During excavations in the Victorian era, archaeologists unearthed 31 bodies buried within the cavities.

Where others might appreciate the melodic sound of birds tweeting, or the fields and dry-stone walls stretching off into the distance, I was more intrigued by the ancient burial ground. As I stared into the darkness of one of the chambers, I made out the articulated skeleton (technical term) of a young woman. She had been crammed behind a gigantic boulder – what was called a ‘blocking stone’ – so hidden from view of the casual tourist. As I stood alone beside the grassy mound, the story of The Death Chamber began to take shape.

My detectives, Jack and Stella, go to Winchcombe to solve two murders. The body at Belas Knap was Cassie Baker, aged eighteen and found interred there 22 years after leaving a disco in 1977. Everyone thought she’d run away to the ‘bright lights’ of London. In 1999 Bryony Motson, also eighteen, didn’t catch the 606 bus from Cheltenham home to Winchcombe after a night clubbing with friends. Her body was never found.

I wanted to put Jack and Stella, confirmed Londoners, out of their comfort zones. The rural landscape is alien to them both. Stella is adept with a vacuum cleaner, but clumsy as she climbs over stiles and fears getting lost in fields that all look the same. Jack prefers his streets well-lit and with houses he can peer in to. They both like to watch lives being lived, but here in Winchcombe, it seems there are only sheep and cows to observe. They’re confounded by the twisting country lanes and, when the sun goes down, pitch darkness. Only Stanley, nosing in hedges and chasing new smells, (he’s modelled on Alfred) is at home.

Jack and Stella are staying in a remote cottage with no electricity so they head to the hardware shop and stock up on candles and fire-lighters. Adversity can bring people closer. Stuck together in the middle of nowhere Jack and Stella only have each other. Or do they?

Now as I wander through Winchcombe I come across my characters. Across the road there’s Jack and Stella browsing in the baker’s windows. Or they’re silhouetted against the setting sun on a footpath ahead of me. When I get my daily latte from Food Fanatics (the Winchcombe Deli in the book), I spot them both huddled over notebooks at the corner table.

But then wherever I go, they’re always with me…