‘The Egyptian’ by Layton Green

After the success Layton Green has had with his first novel ‘The Summoner’, get ready for the next action packed adventure for his character, Dominic Grey.

‘The Egyptian’ is due for release on August 27th 2011, initially as an e-book only, but with plans for a paperback edition to follow a little later down the line.

I have already started reading the ARC copy, which Layton kindly forwarded to me and will be publishing my thoughts about it, a little nearer to the official release date.

For anyone interested in reading some great cult fiction, full of intrigue, hard-hitting action and suspense, then watch the events page, where details of a great double offer on both books, will be be announced soon…. 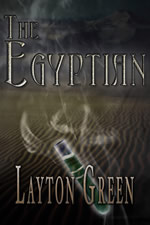