It was great to meet (albeit virtually) the lovely Lauren, representing publisher

Head of Zeus, who organised this Blog Tour and the amazing banner!

As always, an additional thanks go to the great team at NetGalley, for the seamless download. 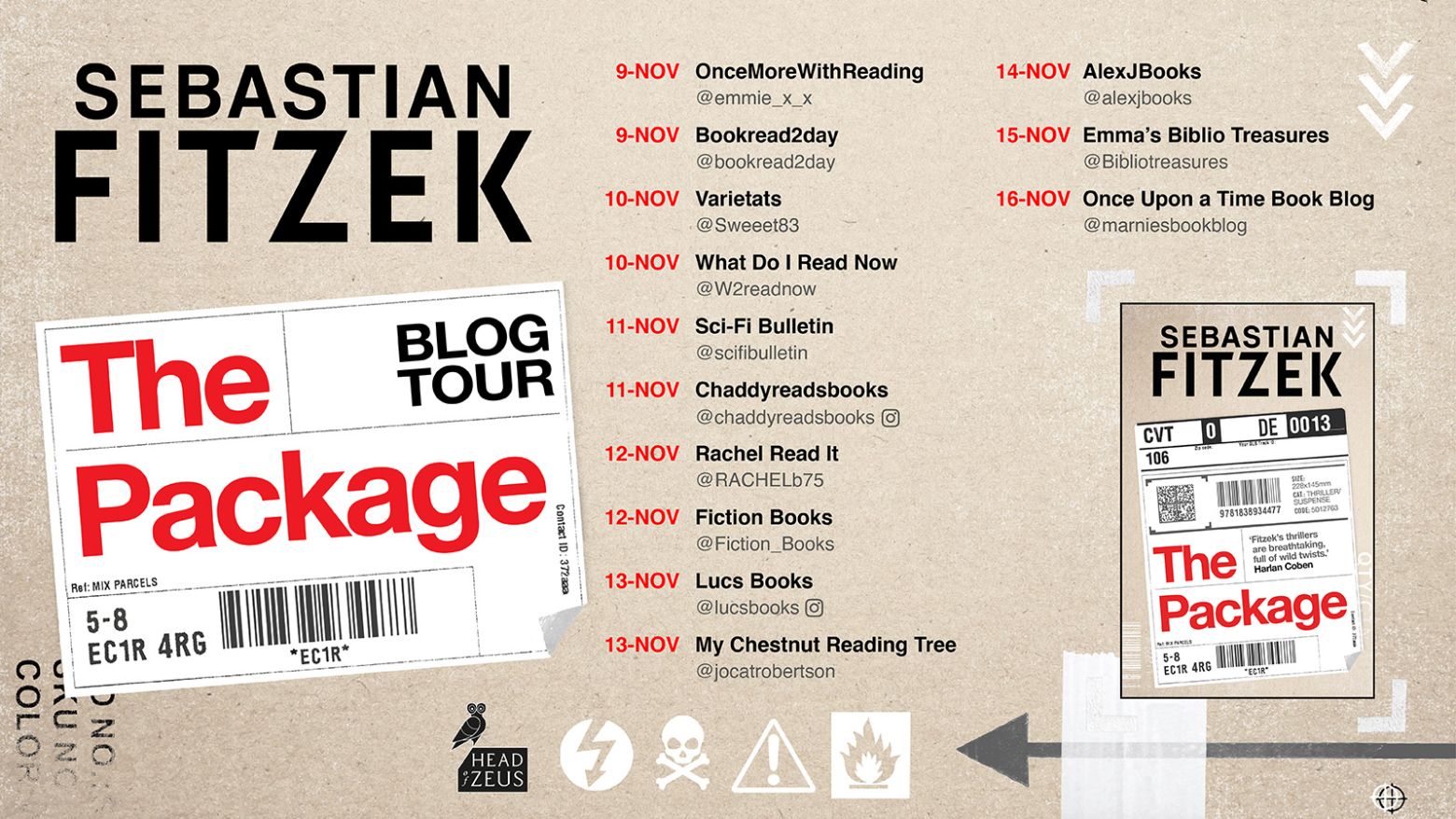 Questioning her sanity, she gives up her job as a doctor in the local hospital and retreats from the world. It is better to stay at home. Quiet. Anonymous. Safe. He won’t find her here.

Sebastian Fitzek was born in Germany in 1971. After attending law school and being promoted to LL.D. he decided against a juridical profession in favour of a creative occupation in the media.

After the traineeship at a private radio station, he switched to the competition as head of entertainment, becoming chief editor. Thereafter he became an independent executive consultant and format developer for numerous media companies across Europe.

Sebastian is one of Germany’s most successful authors of psychological thrillers. His books have sold over 11 million copies, been translated into more than 24 languages, and have been the basis for international theatre and cinema adaptations.

He was the first German author to be awarded the European Prize for Criminal Literature.

Sebastian lives with his family in Berlin.

The book has been translated from its original German by talented translator, Jamie Bulloch

“When Emma opened her parents’ bedroom door she didn’t know that it would be for the last time. Never again would she clamber into their bed, toy elephant in hand, to snuggle up to her mother at half past midnight, trying her best to avoid waking her father who’d be kicking about, mumbling random words or grinding his teeth in his dreams.

Emma toddled into the bedroom form the darkness of the corridor. The light of the full moon, which towered over Berlin like a midnight sun on this spring night, shimmered into the room like mercury through the drawn curtains. Screwing up her eyes, over which her fringe hung like a chestnut-brown curtain, Emma could make out her surroundings: the rattan chest at the foot of the bed, the glass tables that flanked the wide bed, the wardrobe with sliding doors where she used to hide.

Until Arthur entered her life and spoiled the game of hide and seek.

‘Papa?’ Emma whispered, feeling for her father’s bare foot that was sticking out from under the duvet.

Emma herself was only wearing one sock, and even that was barely attached to her foot. She’d lost the other while asleep, somewhere along the way from the sparkling unicorn palace to the valley of the silver-grey flying spider, who sometimes frightened Emma in her dreams.

But not as much as Arthur frightens me.

Even though he kept assuring her he wasn’t wicked. Could she trust him?

Emma pressed the elephant more tightly to her chest. Her tongue felt like a dry lump of chewing gum stuck to the roof of her mouth. She’d barely heard her thin voice, so she tried again:

‘Papa, wake up.’ Emma tugged at his toe.

As her father retracted his foot he turned to the side with a whine, briefly lifting the duvet and filling Emma’s nostrils with his sleepy odour. She was certain that if she were blindfolded she could pick her father out of a dozen men by his smell alone. The earthy mixture of tobacco and eau de cologne, which was so familiar. A smell she loved.

Emma briefly wondered whether she’d be better off trying her mother. Mama was always there for her. Papa often grumbled. Mostly Emma had no idea what she’d done when doors were slammed with such force that the entire house shook. Later Mama would say that her father didn’t really now himself. She explained that he was ‘Earasable’, or something like that, and that he felt sorry afterwards. Just sometimes, albeit rarely, he even apologised. He’d come to her room, caress her tearstained cheek, stroke her hair and say that being a grown-up wasn’t so easy, because of the responsibility, because of the problems you had to deal with, and so on. For Emma these select moments were the happiest of her life, and just what she was in need of right now.

Today, especially, it would mean so much to her.

Seeing as how frightened I am.

She was moving to the other end of the bed to touch his head when she tripped over a glass bottle.

In her excitement she’d forgotten that Mama and Papa always had a bottle of water by the bed in case one of them got thirsty in the night. When it toppled over and rolled across the parquet floor, to Emma’s ears it sounded as if a freight train were ploughing through the bedroom. The noise was deafening, as if the darkness amplified sound. The lights went on. On her mother’s side.

Emma let out a high-pitched cry when she suddenly found herself in brightness. ‘Sweetheart?’ said her mother, who looked like a saint in the beam of her reading light. Like a saint with dishevelled hair and pillow creases on her face.

Startled, now Emma’s father opened his eyes too. ‘What the hell…?’ His voice was loud, his eyes were scanning the room, trying to get their bearings. He’d obviously woken from a bad dream, maybe it was still in his head. He sat up.

‘What’s wrong, sweetie?’ her mother said. Before Emma could reply, her father shouted again, this time even louder. ‘F**king hell!’

‘Thomas,’ her mother chided him.

Maintaining his strident tone, he waved his hand towards Emma. ‘For Christ’s sake, how often have I told you…’

‘…to leave us alone at night!’

‘But my…my…my… cupboard…’ Emma stuttered, her eyes welling with tears.

‘Not again,’ her father scowled. Her mother’s attempts to calm him only seemed to make him angrier.

‘Arthur,’ Emma said nonetheless. ‘The ghost. He’s back. In the cupboard. You’ve got to come, please! He might hurt me otherwise.’

Her father was breathing heavily, his face darkened, his lips quivered and for a split second he looked how she imagined Arthur to be: a small, sweating devil with a big tummy and bald head.

‘Thomas!’ she heard her mother cry again as she staggered backwards.

Those words had struck Emma hard. Harder than the table-tennis bat she accidentally got in the face last month in games. Tears flooded her face. It was as if her father had slapped her. Emma’s cheeks were burning even though he hadn’t even raised a finger.

‘You can’t talk to your daughter like that,’ she heard her mother say. Anxiously, with a soft voice. Almost imploring him.

‘I’ll talk to her as I like. She’s finally got to learn that she can’t come bursting in here every night,’

‘And I’m a forty-four-year-old man, but it seems as if my needs count for nothing in this house.’

Emma dropped her elephant without realising it. She turned to the door and left the room as if she were being pulled along like a puppet on a string.

‘Will you shut up with your Thomas,’ her father said imitating his wife. ‘I’ve only been asleep for half an hour. If I’m not on form in court tomorrow and lose this case then that’s my practice up the spout and you can wave goodbye to all this: the house, your car, the baby.’

‘You know f**k all. Emma’s already eating us out of house and home, but you were adamant about having a second kid, who’ll stop me from sleeping altogether. For Christ’s sake. It might not have escaped you that I’m the only one earning money in this family. And I NEED MY SLEEP!’

Although Emma was already halfway down the corridor, her father’s voice wasn’t any quieter. Only her mother’s. ‘Shhh, Thomas. Darling. Relax.’

‘LOOK AFTER? Ever since you got pregnant again, you’ve only looked after…’

Emma closed her bedroom door, shutting out her parents’ voices. Or at least those from the bedroom. Not those in her head. Get out, Emma, right now, or… She wiped the tears from her eyes and waited for the roaring in her ears to disappear, but it wouldn’t. Just as the moonlight, which shone more brightly here than in her parents’ room, wouldn’t vanish back out the windows. Her blinds were made of thin linen, while the luminous stars stuck to the ceiling also glowed above her bed. My bed. Emma wanted to crawl into it and cry beneath the duvet, but she couldn’t do that until she was certain that the ghost wasn’t in his hiding place. Certain that he wouldn’t pounce on her while she was asleep, certain that he had gone, like he had every time when Mama went to take a look with her.

The old farmer’s cupboard was a monstrosity with crude carvings in the oak doors, which mimicked the cackle of an old witch when they were opened. Like now. Please let him not be there. ‘Hello?’ Emma said into the black hole before her eyes. The cupboard was so big that her things only took up the left-hand side. On the other side there was space for her mother’s towels and tablecloths. And for Arthur.

‘Hello,’ the ghost with the deep voice answered. As always it sounded as if he were putting a hand in front of his mouth. Or a cloth. Emma let out a short scream….