We All Fall Down
by Cynthia Clark
Blog Tour

I had the privilege of featuring author Cynthia Clark’s debut novel If You Only Knew, back in October 2017, when she stopped by with a lovely Guest Post, to feature as my spot on the book’s Blog Tour. So to see her writing career flourishing with We All Fall Down, her latest novel, is amazing!

This time, it is unfortunate that Cynthia is unable to offer Fiction Books a Guest Post, however my spot is right near the beginning of this extensive Blog Tour, so it is worthwhile stopping by some of the other featured participants, as there are are sure to be some excellent reviews, extracts and Guest Posts to be shared.

As always, thanks go out to NetGalley for their seamless download service and Aria Fiction for the opportunity to read and feature this amazing sounding book. 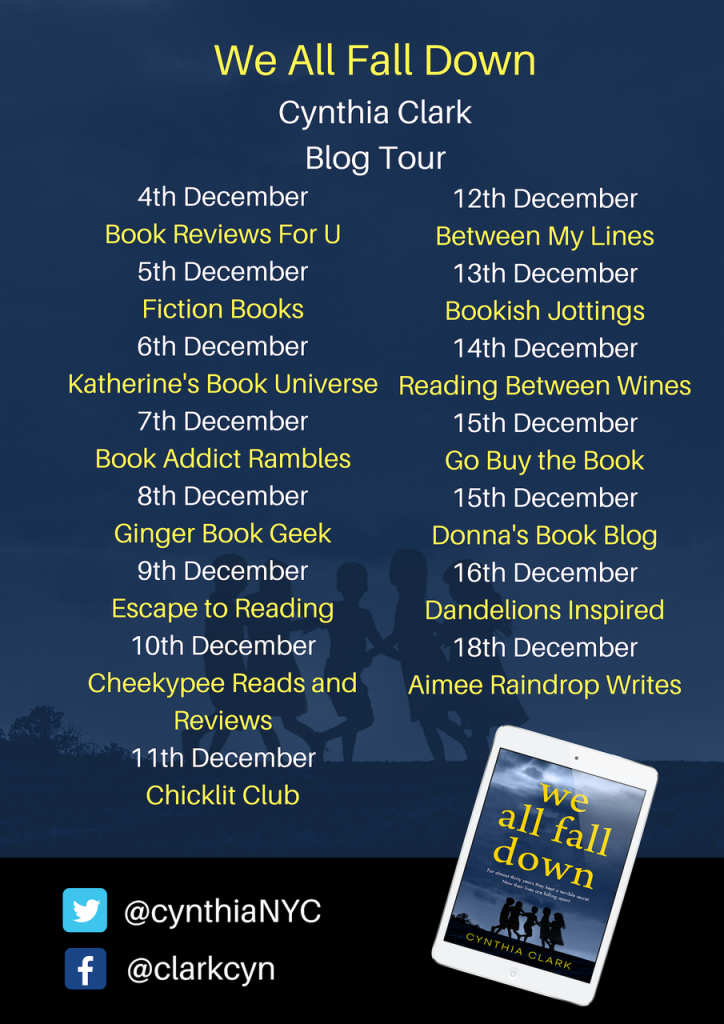 WE ALL FALL DOWN 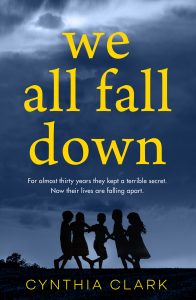 Many years ago orphans Bea, her brother Sebastian, Helen, Sandra and John lived together in a home, with their carer Miriam.

But Miriam didn’t care at all. If you asked the children, they would have said that Miriam hated them. And it’s no fun living with someone who hates you, so the children decided to do something about it… Then a terrible accident changed everything, and the children were ripped apart from each other.

Many years ago Ronnie Moss made a mistake he can never take back, no matter how much he wishes he could, so instead he runs for his life. But he can’t run forever.

Many years later the secrets of the past are finally being revealed, and nothing will ever be the same again.

Cynthia Clark has written a breathtaking suspense novel for all fans of B A Paris and Sophie Hannah.

Born and brought up in Malta, Cynthia Clark graduated in Communications before going to work for a daily newspaper.

After following her now husband to New York, she worked as a writer for online business journals, before moving to London, where she started writing her debut novel, If You Only Knew.

She currently lives back in the US, with her husband and twin daughters.

“Perhaps it is my years working as a reporter that has made me appreciate fictional writing even more. There are no constraints, no boundaries, no restrictions. I love the freedom of taking my characters on an exciting journey of my own making”

As my featured spotlight on this tour, Aria Fiction and author Cynthia Clark, have asked me to share this short extract from We All Fall Down

Ronnie Moss ran and ran. He didn’t dare stop. The tiredness had disappeared and he was suddenly sober.

‘I’m in so much trouble,’ he said over and over. It was not going to take the police long to track him down. They would smell the alcohol on his breath and he would be in jail within minutes. There was no escaping that fate. He had crashed into a van of school children and probably killed them all.

For a moment he allowed fear and emotion to overwhelm him. He had killed children. He deserved to be put away.

But then he remembered his parents. His mother, recently diagnosed with cancer, putting on a brave face as her hair fell out, as her body was ravaged by both the disease and the treatment intended to cure it. And his father, working hard, trying to be the rock his ailing wife desperately needed. No, he would not allow his parents to see him in jail.

Quickly, he changed direction and ran to the bank, shifting impatiently as he waited for it to open. He didn’t know how much time he had, but it couldn’t be long. Finally he was inside, standing across from a cashier who seemed as if she was still half asleep. ‘What is the reason for the withdrawal?’ she asked when he told her he wanted to take out his meagre savings.

Ronnie felt his heart miss a beat as a voice in his head urged him to think quick. ‘A chap I know is selling his car. It’s barely used, very low mileage. A great deal.’ He smiled, crinkling his eyes, hoping that she would believe his tale.

The teller sat back in her chair and looked at him through narrowing eyes. The lump in Ronnie’s throat threatened to choke him but he forced himself not to react, to keep breathing, act as calm as he could.

‘You might want to take the car to a mechanic, make sure all is as it looks and this person is not selling you a problem on wheels.’ With that she tore her eyes away from Ronnie and rummaged in her cash drawer.

He didn’t want to fritter away his hard-earned cash but time was of the essence. He couldn’t spare even one minute. Tucking the envelope filled with notes into his jacket pocket, Ronnie hailed a taxi. ‘Heathrow airport, please.’

‘Which terminal?’ the driver asked.

The question took Ronnie by surprise. He had never been out of the country, had only got a passport because of his driving gig. His boss had said that there might be jobs to mainland Europe and he carried it with him just in case. It was his lucky break.

‘Where are you going?’ the driver asked, seemingly eager to make conversation.

‘Uhm, nowhere, just picking up my mate,’ he lied.

Ronnie nodded and turned his head, eager to avoid being drawn into telling more lies. His head throbbed and he rested it against the window. The cold glass felt blissful on his aching temples. As the taxi chugged forward, the gentle movements soothed Ronnie. Suddenly the tiredness came rushing back and his eyes started fluttering shut.

The hand on his shoulder was firm. His heart skipped a beat. It hadn’t taken the police long to catch up with him. But when he opened his eyes, it was only the taxi driver. ‘We’re here,’ he said. ‘You drifted off and have been asleep the whole way.’

‘Sorry, sorry,’ Ronnie said, jumping up and digging into his pocket for the money, handing some notes to the driver.

Inside the terminal he looked for the signs to Departures. The place was teeming with people, everyone running to their destination, looking at the large monitors. ‘Ouch,’ Ronnie yelped as someone hit him with a suitcase.

That was what he didn’t have: a suitcase to make it seem as if he were going on holiday. He headed to the luggage store and searched for the cheapest bag, paying and running back out. Next he went to Boots and bought some toiletries. There was a clothes store and he picked up a few T-shirts and a pair of shorts from the clearance rack. Quickly removing all the tags, he shoved them inside the duffel bag and ran towards one of the screens, skimming over the flights. He needed to find a place far enough away that nobody would think of looking for him there. Not even Laura.

Shaking his head to banish the thought, Ronnie headed to one of the counters. There were a few people waiting, other travellers looking to buy a last-minute ticket, hoping to get a bargain. Ronnie shifted his weight from one leg to the other, urging the queue to move fast. He needed to get out of England right now.

‘I’d like a ticket to Jamaica,’ he said when his turn came. ‘The half past eleven flight.’

‘Of course, sir. Will you be travelling on your own?’ the girl asked in a clipped accent.

She started clicking some keys on the computer, crunching her face as she looked at the screen. ‘That will be three hundred pounds,’ she said.

Ronnie felt as if he had been punched in the gut. That was too much. He couldn’t afford to be so reckless with his cash….