What’s New On The Shelves This Week?

As I have only one new book to add to my shelves this week, but it is the first title to be published in English, by an established and respected Danish author, in the crime thriller/mystery thriller genre, who is a great new find for me, I have decided to make this a combined post and also highlight both author and book on my ‘New Titles’ pages.

Your host for January 2013 is: Lori over at Lori’s Reading Corner.

So why not stop by, leave a link to your own Mailbox Monday post, oh! and don’t forget to leave a comment for Loi, after all, we all like to receive them!

Two women disappear without a trace, and the same autumn a farmer on the outskirts of Århus finds them murdered in suitcases under a heap of stone. The skin of one woman is filled with the letter Y and the other has a rare flower in her hair. Inspector Daniel Trokic is leading the case which goes in several directions: to a tribal population in Africa, religious insanity and a horrifying meeting with leeches. When a third woman disappears, Trokic is under pressure to find out what the killer wants to say with his macabre scenery and rituals 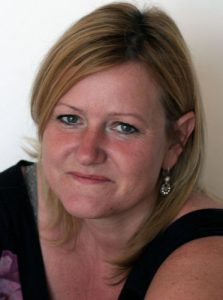 Inger Wolf was born in Herning in Denmark in 1971, but spent the first ten years of her childhood in the city of Århus close to the forests and the sea. This beautiful place was later to be the fictitious  setting for several murder cases in her novels. Inger’s parents divorced when she was nine years old, and she moved with her father, a musician, to a small village in the countryside where she spent the next 18 years.

Inger started writing when she was around ten years old. When she was 15, she wrote her first book – a novel about a rock band. The book was never published, and more unsuccessful attempts followed before she finally had her first novel Sidespring (On the Side) – a book about divorce and motherhood – published in 2000 by Rosinante. In the meantime she studied English at a business school, and was now supporting herself as a freelance translator.

In 2001 Inger moved back to Århus and her old neighborhood – and the forests and the sea. Long walks in the surrounding nature became the inspiration for her first crime novel Sort Sensommer (Black Indian Summer) which was published by Modtryk in 2006. Sort Sensommer won the 2006 Danish Crime Academy Award as ‘Most Exciting Crime Novel Debut’, and the rights for the book were sold to Norway, Holland, Germany, Sweden and Spain. Since then four more books about Inspector Daniel Trokic and his team have been published – Frost og Aske (Frosh and Ashes) in 2008, Sangfuglen (Song Bird) in 2009, Hvepsereden (Wasp’s Nest) in 2011, and Ondt Vand (Evil Water) in 2012. A sixth book in the series, Sort Nord (Black North) will be published March 2013.

Today, Inger lives with her Dutch boyfriend Toine and her 17 year-old daughter Cecilie in a town house in Spain. The household also includes two cats and two dogs.

As this was a publisher invitation to read and review, a Kindle download of ‘Evil Water’ was sent to me free of charge, by Black Cat Edition’s representative, Melanie Navarro.