“When everyone is on the make, it’s hard to tell who’s fooling who…”
‘The Mark’
By Heather Burnside
Blog Tour Extract

Following the enthusiastic response to the cover reveal posts for this new series, the work really begins for everyone now, with the first in a series of Blog Tours, following publication of the opening book.

Thanks as always to Vicky from Aria Fiction for making room for me on this busy schedule and to NetGalley for their ever efficient download service. 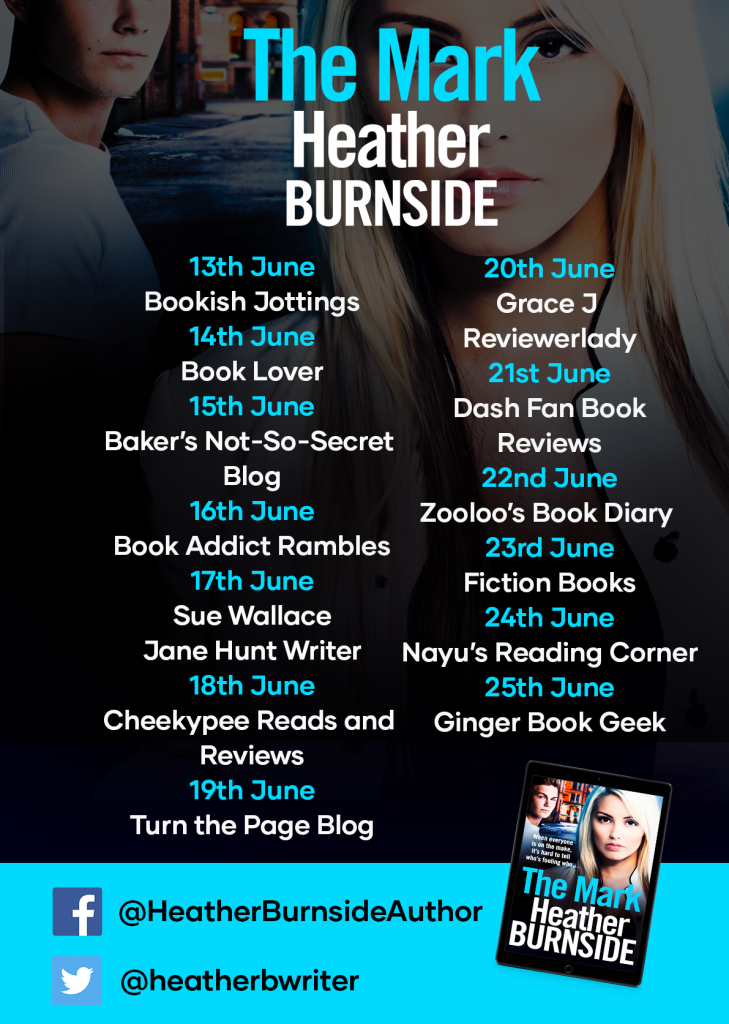 “I am very excited to announce my new series of books called, The Working Girls. As the title suggests, it centres around the world of prostitution.

The idea for the series started when I watched a police detective series many years ago. In one particular episode the female detective was interviewing prostitutes in a seedy pub where she seemed completely out of place in her smart suit and with her refined middle-class accent.

I remember thinking how gutsy she was to do that and that she might be leaving herself open to all sorts of danger. This gave me the idea for the first book but I replaced the police detective with my journalist, Maddy.”

The two women sitting side by side in the run-down Manchester pub couldn’t have been more different, so they made for unlikely friends. Maddy was an attractive middle class woman in her late thirties, outwardly confident and self-assured. Her background showed in her clothing, which screamed of quality. She was wearing a neat top, pristine leather jacket and expensive fitted jeans that flattered her trim yet shapely figure.

Her blonde hair was shoulder-length, lustrous and wavy, but today Maddy had it in a loose chignon. The style emphasised her perfectly formed face with high cheekbones, smooth complexion and large cat’s eyes. She wore a light dusting of premium-brand make-up, carefully applied to enhance her striking features.

Crystal, on the other hand, although only in her early twenties, already had a careworn complexion, which was over emphasised by cheap, garish make-up. Her messy bright red lipstick was paired with a darker shade of lip-liner, which extended beyond the natural outline of her lips and made her look clown-like.

Likewise, Crystal’s eye make-up was heavy and there were thick clumps on some of her eyelashes where the mascara had clogged. Her eyebrows had been plucked to death then pencilled back on in a shade of brown that looked out of place against her intense, dark eyes. Even her hair let her down; it was dyed in a lurid shade of red and was dry and coarse.

Although it was growing cold outside, Crystal wore a short skirt displaying her bare, skinny legs, which were covered in sores, and the backs of her feet were red and inflamed from wearing plastic, high-heeled shoes. Her top clung tightly, exposing the mounds of her huge breasts, which were at odds with her skinny frame. She had obviously had a boob job, under the guidance of her pimp rather than her plastic surgeon.

The Rose and Crown was tucked away in the back streets of Manchester where it had managed to avoid the redevelopment that had taken place in other parts of the city centre. Its dated, shabby décor and worn furniture were reminiscent of a previous era. Although close to the thriving main streets, the pub seemed a world away from the twenty-something revellers, hen and stag parties, and excitable young students who thronged nearby. This was the sort of place frequented only by those in the know and who were up to no good.

Inside The Rose and Crown customers chatted, joked and struck illicit deals while a grubby-looking dog lay sprawled lethargically beneath one of the battered tables. The sound of Girls Aloud played quietly through outdated speakers; it was the pub’s only nod to the early twenty-first century.

Maddy was sitting amongst a group of women who were dressed similarly to Crystal, their clothes selected for maximum exposure rather than as a defence against the chilly night air. Although Maddy’s clothing and make-up weren’t as bright as the other women’s, she stood out from the crowd, for Maddy had class as well as charisma, and a way of dealing with people that immediately put them at ease. 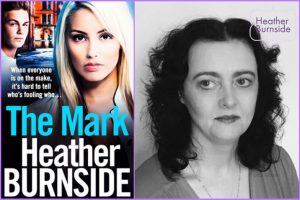 Written by Yvonne
4 comments
“Why do I write psychological thrillers?”
‘I Know You’re There’
by Sarah Simpson
Blog Tour
FacebookTwitter
“Another duo to keep me awake at night!”
Mailbox Monday