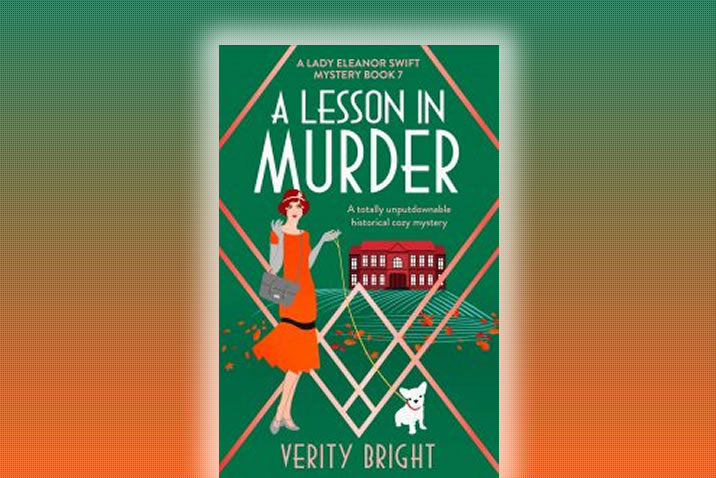 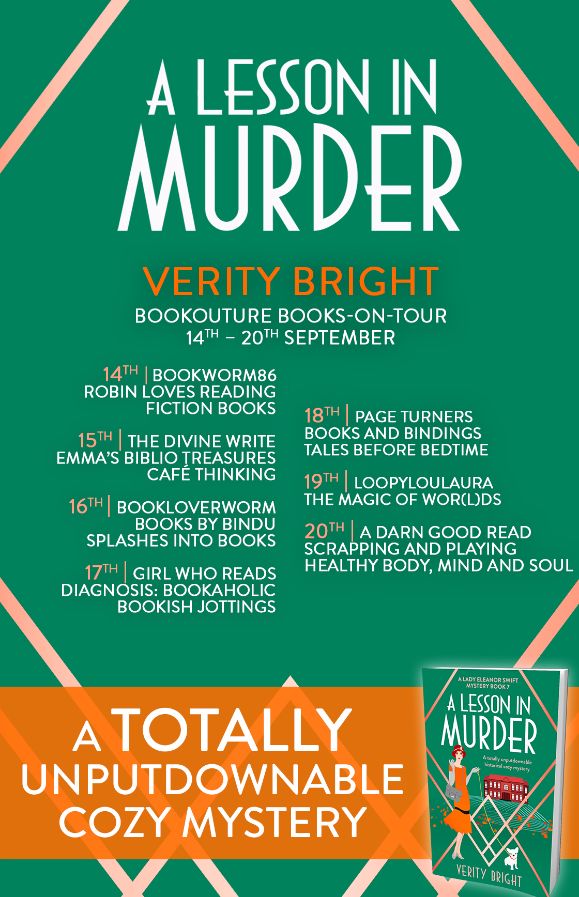 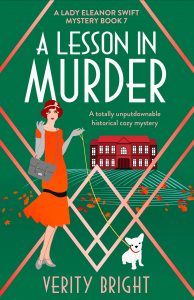 When Lady Swift is invited to her old school, she walks through familiar classrooms, finds her favourite books in the library… and surely that’s not a body? Time for a lesson in murder!

Autumn, 1921. Lady Eleanor Swift is invited to her old school, St Mary’s, as a guest speaker. Her favourite teacher, Mrs Wadsworth, has asked that Eleanor talk about her intrepid travels around the globe – travelling the Silk Road by bicycle, crossing the Himalayas and even befriending the Maharaja of India. But in the circumstances, perhaps it would have been a good idea to talk about her career as a daring detective…

Because no sooner has Eleanor brushed up on her times tables then she is greeted by terrible news: Mrs Wadsworth has been murdered. Eleanor is utterly devastated but she owes it to her dearest teacher to find out who killed her and why. So, alongside Gladstone the bulldog, it’s best paw forward to track down a villain.

But when the art teacher is also found dead, Eleanor is sure someone is trying to do away with the people who taught her everything. As Eleanor delves into possible motives, she discovers a clue in the most unlikely place: her mother’s old school diary. Does the route to the murderer lie within a secret passageway her mother uncovered? Can Eleanor nail the culprit in time or is the killer coming for her next?

“It wasn’t the early June heatwave that was making Lady Eleanor Swift feel lightheaded, even though it was stifling in the packed hall. She tried to swallow her anxiety but the knot in her stomach tightened again, making her feel more than a little uneasy”

“Remember, darling girl, nerves just mean you are being braver than you’ve ever been before”

“Age alone, Chief Inspector, like gender, need never be a barrier but for the prejudice of others”

“Your confidence in your staff is wonderful to hear. It’s no consolation I know, but I’ve learned that a wrongdoer never gives one a reason to mistrust them until they seize the opportunity they’ve been waiting for”

“Perhaps not, but errors of judgement founded on noble intentions can never be completely condemned”

“Plausible deniability can be a useful tool when facing interrogation from further up the chain of command perhaps, Chief Inspector?”

Recently, I have become quite invested in several different series of ‘Golden Age’ mysteries, with Lady Eleanor Swift, her butler Clifford and trusty canine companion Gladstone, right up there amongst my favourite amateur sleuthing partnerships.

When I open the first page, to greet my new found friends, I just know that it is going to be like putting on a warm fluffy dressing gown and comfy slippers, curling up in front of a real roaring fire, with a warming drink, some delicious snacks, and lovely company (once you have read this delightful story you’ll see exactly why, for yourself).

Whilst during the course of previous investigations, I have been made privy to certain personal facts about Eleanor and her life before she inherited her title and family property following the death of her uncle, this case takes things to a whole new level as Eleanor is taken back to a period of her childhood she had thought she would much rather have forgotten about. However, as events unfold and from necessity, she finds herself becoming more deeply involved in day to day life at her old boarding school, where she uncovers new and hitherto unknown to her information about her family, which is bittersweet, very poignant and has the power to change her entire perspective about her past.

The book also comes with an additional, very thoughtful little mini guide of historical notes, which elaborates on many quirky aspects of the story which are alluded to briefly, but which adds some interesting detailed facts to back up the general narrative.

This well structured, multi-layered storyline, is totally immersive, beautifully textured and rich in detail and atmosphere. The narrative is assured, observational and visually descriptive. The dialogue is easy-going and conversational. In amongst the growing body count, there are a few lighter, compassionate moments, which helps to release the tension for both teachers and pupils alike, and are a testament to the authors’ confidence in the imagery their words can conjure up. Eleanor also has a habit of talking and reasoning with herself, although unlike myself, someone who tends to verbalise my conversations, Eleanor keeps them very much inside her own head, resulting in some lovely imaginary ‘speech bubbles’ as she sets about her various undercover investigations.

There is no unnecessary preamble with this storyline, the action kicks in from the word go, when the body of Eleanor’s favourite teacher is discovered. The chapters are short and punchy, keeping the dialogue fluid and the narrative seamless and easy to follow. The ending is brought to a satisfying conclusion for almost everyone involved, with no annoying little loose ends left tantalisingly hanging. Even Eleanor’s rather on-off, foundling relationship with DI Hugh Seldon, seems to finally be heading in the right direction, despite her own and Clifford’s involvement in yet another of his investigations, which has always hitherto, been a sticking point in any future they might have together as a couple. On this occasion however, Hugh has no choice but to call on ‘inside help’ from the intrepid duo, even though he tries to fool himself into thinking that he is in control of the situation – as if!

Eleanor has had to learn the lesson the hard way, about the protocols and accepted behaviours which come with the title of ‘Her Ladyship’. Meanwhile Clifford has well and truly had his eyes and mind opened to the responsibilities of being both butler and confidante to a young woman who is far ahead of her times, is often unorthodox and downright unladylike in her behaviour, and is far from confident or happy with adhering to the traditional social mores and class structure, which her newly appointed station in life demands. However as time has inexorably moved on, there has definitely been an unspoken shifting and meeting of minds between them. Decorum and protocol remain very much the watchwords when circumstances dictate, whilst in more private and intimate moments, or whilst they are in consultation over yet anther murder investigation, a more easy relaxed atmosphere ensues.

The authors have created a core cast of wonderfully developed, authentic characters, who will more than ably stand the test of time, combining high style and murder in an altogether unique way. They are generally easy to connect with and invest in, with a dynamism and synergy which only comes from having been given a free hand and strong voice with which to tell their own stories, with merely the gentlest of guiding hands from their creators. The extra characters added to compliment each investigation are all equally well defined and know the part they have to play, and whilst not all might be as amenable as Eleanor and Clifford, they are just as addictive and genuinely believable.

This is pure enjoyment, entertainment and escapism – what better motives for reading can there possibly be!