Above The Bright Blue Sky
by Margaret Thornton
Review

ABOVE THE BRIGHT BLUE SKY 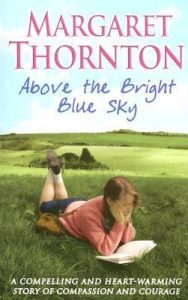 Life for Maisie Jackson has been far from happy for a number of years – ever since her mother re-married after her beloved father’s death.

Suffering abuse at her cruel stepbrother’s hand, and mercilessly tormented by her stepfather, Maisie dreams of escaping to a new life far away. And it seems her dreams are about to come true…

It is 1939 and war is suddenly looming dark on the horizon. For many, with memories of the ‘war to end all wars’ still fresh in their minds, this is a horrific and frightening prospect. But for nine-year-old Maisie, it represents her longed-for chance of freedom – maybe she’ll be evacuated to the countryside, to one of the places her father used to tell her about.

As the small market town of Middlebeck in the Yorkshire dales prepares for the arrival of the evacuees, many of the villagers ponder on how they will cope with this sudden influx of visitors. But they are all determined to pull together and welcome the strangers with open arms, eager to ‘do their bit’ for the war effort. In this time of trouble, when life suddenly seems so precious and vulnerable, true and lasting friendships are formed and love blossoms as the dark cloud of war eventually clears to the bright blue sky of a hopeful future

Margaret Thornton was born in Blackpool and has lived there all her life.

She is a qualified teacher but has retired in order to concentrate on  her writing.

She began by writing articles and short stories for magazines and has since gone on to have more than nineteen novels published to date, most of which are set in Blackpool.

Her family sagas range from the late Victorian period, through to the Twenties, the Second World War, and the Fifties and Sixties.

“Maisie crouched halfway down the stairs, her ear pressed hard against the bannister railings, listening to the conversation that was going on between her mother and her step-father. It was developing into more of a row though, now, than a conversation, but that was nothing fresh….”

One often  hears about the horrors of war from the front-line, but this book concentrates on war from the perspectives of those struggling to maintain some kind of normality and family life, for those left at home.
The trauma of evacuation for Maisie and her friends was immense, but for her mother Lily and the other parents to know that their children had been given over to the care of  complete strangers, was devastating. Lily had thoughts that Maisie would become so attached to her foster family, that returning to her own family home would be fraught with problems, especially given the terrible circumstances of her leaving.
Whilst Maisie did become a little jealous of her special position within the Fairchild family, she was ultimately overjoyed to be reunited with her Mother and siblings. It was also a time when the gentry was forced down from it’s self imposed pedestal and literally had to open it’s doors, both to the returning servicemen and to the evacuees, the very kind of people they often fought so hard to distance themselves from. The Squire and his family found that they enjoyed being a part of the community, making new and lasting friendships with both locals and newcomers, with whom they would never ordinarily have mixed.
Many of the evacuees were ill-treated by their foster families, as Maisie’s new found friend, Audrey, found to her cost.  However, when ‘Gentlewoman’, Miss Thomson is found out and is suitably castigated, she finds that a whole new world opens up to her, when she accepts and allows people from outside of her perceived class standing, who genuinely care about her and wish to help her, to be her friends.
Lily becomes part of a whole new tranche of women, who finds that she is quite able to support and make a better life for herself and her children, given the opportunity to flourish, in her new environment.
I came away with the impression that war is a great ‘leveller’ of pre-conceived ideas and social standing; as well as the empowerment of groups of people to rise to a challenge, with long-lasting and permanent consequences. A moving and caring novel, written sympathetically, which captivated me from the first, to the last page.