‘All Fall Down’ by Jenny Oldfield 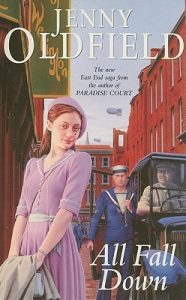 Suddenly into the silence of Duke Street came an ear-splitting wail. It rose from a deep groan, gaining volume, whining overhead, penetrating the courts and alleys at the heart of London’s East End….

They were at war with Germany…..

Yet as the horror of the Blitz tests the indomitable East End spirit to it’s limit, life goes on much as before.

Annie, Hettie and George keep the Duke of Wellington open amidst almost daily bombings, a haven of normality for all their friends. Tommy O’Hagan struggles to hide a secret and forbidden love – until disaster looms; Sadie and Walter Davidson try to adjust as they send their young sons off on the evacuees’ train from Waterloo; and Sadie’s daughter Meggie, spirited, beautiful and sixteen, falls in love for the first time, setting off a chain of events even she could never have dreamed of.

Jenny was born, and still lives in Yorkshire, where, when she is not busy writing, she likes to spend as much time as possible following a wide range of outdoor pursuits, many of them with her two daughters.

She earned a degree in English, from Birmingham University, with further research on Children’s Literature and The Bronte Novels.

Jenny held a wide and diverse range of jobs, before turning to writing full time, and has written on a wide variety of subjects, from magazine stories and crime novels, to books for children and young adults.

Jenny also writes under several different pseudonyms, so if you love sport then look out for Donna King novels; if fashion, friends and love are your favourite reading, then you need to be looking out for Jasmine Oliver novels; and be sure to get hold of Kate Pennington if your choice is adventures in history. Every youngster will know of the amazing childrens’ series which Jenny publishes under her own name.

Something for everyone of all ages, from this prolific and versatile author.

The wireless kept up its steady hum in the corner of the living room as Sadie sat in a shaft of sunlight on a perfect September morning. In her mind’s eye she could see the slick crooner huddled over the microphone, oozing syrupy words to his lady love ….. The wireless whined and whistled.

A thin voice came wavering over the air waves, deadly serious. Germany had considered the British request to withdraw from Poland, but the Prime Minister confirmed the worst. “I have to tell you that no such undertaking has been received and that consequently this country is at war with Germany.”….

Later that evening, Walter tried to come to terms with the idea of evacuating the boys to safety.

The picture of their two boys, joining hundreds of thousands of other children in the exodus from London frightened them beyond words. Thousands of buses and trains crawling out of the capital to unknown destinations. Strange faces to greet them, strange bedrooms to sleep in. And what if they should never see them again?

She stopped by the window, looking out at an orange sky flecked with golden clouds and at the ominous, silent balloons. “Do you think they’ll actually do it?” Her voice trembled. “Actually drop those bombs on innocent kiddies?”

‘A good, down to earth, wartime saga’

This is the final part, of a three book saga, centred around a community in the East End of London, as they share the warmth and hardship of life, this time as they struggle to survive the Blitz of The Second World War.

I must admit to not having realised that this book was part of a series when I began reading, but in my ignorance, found this story to work great as a stand-alone saga, with all the characters, relationships and circumstances, being highlighted and explained adequately, so that I didn’t feel as if I were missing a piece of the jigsaw; unlike so many other multi-part sagas, where the author tends to assume that the reader has read and studied all the various components of the saga  in their relevent chronological order.

The characters are portrayed with genuine compassion and emotion, in dealing with the troubled and chaotic situation that the wartime blitz has caused in all their lives, neighbour helping neighbour and families pulling together, putting their differences to one side in their fight with the common enemy.

At the same time, we are not allowed to forget that these people still have issues that ultimately will not simply disappear, both within their own lives and in conflict with each other. Many of these vagaries become highlighted as a result of the fluid situation in which people have to conduct their everyday lives, with issues being brought to the surface that may otherwise have remained dormant, only to be put onto the back burner for a more appropriate time of reckoning.

The abusive marriage that appeared normal to those around; the resulting illicit wartime affairs, that are viewed with much more tolerance, by a society where no-one is sure of their fate from one day to the next; a secret never divulged, kept by a grieving sweetheart and mother; a daughter searching for her birthright, forced by her sense of decency and justice, to help a miserable life, have a dignified end.

So many secrets, but the young will recover and move on, whilst the old will be more tolerant and hold their council….

I was also intrigued to find out, how the story, revolving around the London’s East End, would be dealt with by a born and bred Yorkshire author. I was looking for the same authenticity of character, quality of research and grasp of ‘London Life’, as would be portrayed by a London born and bred author. I have to say, I was pleasantly surprised, even more so that the story was written in ‘The Queen’s English’, with no sign of the forced London speech dialects, that so often prove to be an annoyance. Many people would say that the speech dialects, add to the authenticity and atmosphere of the piece, but personally, I find them to be often badly executed and much better left alone as straightforward text.

This paperback copy was a charity shop find and has been languishing on my book shelf for many years. I have written this review for my own records and enjoyment and have not been requested so to do by any author, publisher or social media site.