The opportunity to read this Christmas novella, was one of those ‘right time, right place’ Netgalley moments, when publisher Bethany House, released some ‘Read Now’ copies, so my thanks to all concerned. 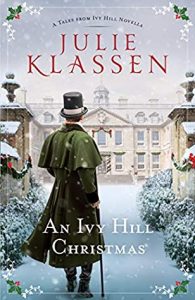 But then his mother threatens to stop funding his carefree life–unless he comes home for Christmas. Out of options, he sets out for Ivy Hill, planning to be back on a coach bound for London and his unencumbered bachelor life as soon as the festivities are over.

Julie is a graduate of the University of Illinois.

She worked in publishing for sixteen years, before turning to writing her multi-award winning books, full time.

Enjoying BBC period dramas, Julie is a lover of romance, British accents, Jane Eyre, or anything by Jane Austen.

Julie lives with her husband and family, near St. Paul, Minnesota.

“Walking past a linen draper’s Richard Brockwell surveyed his reflection in the shop windows with approval. He cut a fine figure, although he said it himself. Inside, he glimpsed a pretty debutante he had been introduced to at some ball or other. She had flirted with him, and they had danced once, but he had not asked her again nor called on her afterward. Nor did he stop to renew their acquaintance now. She was too young and too … eligible”

“I applaud your philanthropic spirit. Truly. And like you, I give all I can spare to my charity of choice. My favourite coffeehouse and bookshop have first claim on my heart – and my purse”

“Yes, drat those men with professions. How tedious. They make us men of leisure look bad”

“In a lonely place, he stopped, struck by the sight of a long stretch of freshly fallen snow. Unscathed by animal tracks, footprints, or wheel ruts. Untouched by man. Pure white, unblemished, unspoilt, beautiful – perfectly capturing and reflecting the sunlight. What would it be like to be that new, that perfect, that pure, he wondered, when he himself felt sullied – a dark, muddy mess. And what was it about seeing such a sight that made a man want to step foot across it, to claim the virgin territory for himself and make his mark? And too often, end up ruining it? Richard shook his head. Not this time. Not him, not anymore”

“Richard stared at the silent house. His father’s hypocrisy was at least partly why he wrote satire lampooning those who set themselves above others, when they were really sinners like everyone else. He was no saint either, of course, but he didn’t pretend to be”

“unexpected romance changes the heart of one determined bachelor”

The ‘Ivy Hill’ books are a series, with this shorter novella being a Christmas addition. However the author has invested great efforts in making An Ivy Hill Christmas work as a stand alone story, which it does beautifully. Any references to previous events are no more than could be expected from any other stand alone story, and the characters are all wonderfully drawn with relationships explained as part of the ongoing narrative and dialogue.

Also important for me, is that, whilst Ivy Hill is a fictional family estate in Wiltshire, the village of Wishford, near Salisbury, is most definitely not. As this is only a few miles from home, I would count this as a local to me story, which makes it so much more attractive and appealing.

The strong opening sequence is followed by a heart-warming, slightly predictable storyline, although no more so than I would have expected from a period romance, with the package being topped off, as I might have hoped, with a satisfying and totally wholesome ending.

The period research is meticulous and clearly undertaken with great enthusiasm and attention to detail, which is easily explained by the author’s love of all things Jane Austen and British period romantic drama. The realism and authenticity is apparent, even down to the ‘Queen’s English’ spelling in the narrative and dialogue, although I did spot a couple of lapses back into ‘American English’, but I can forgive those in the overall scheme of things.

In a richly crafted, well developed storyline, which is equally plot and character driven; a rich in detail, social commentary of the times unfolds into a saga of a fractured family reunited, overlaid with unexpected signs of spirituality, hard won forgiveness and serendipitous acts of generosity and kindness. Some visually descriptive narrative and entertaining observational dialogue, make this hugely atmospheric story, one to escape into on a cold winter’s day, putting the reader right at ease and at the centre of the action.

The characters are like the pages of an open book, easy to relate to and become invested in, despite their emotional complexity and their individual searches for a sense of belonging. They are remarkably multi-faceted and engaging, with a surprisingly welcome genuine depth of feeling and synergy between them.

The Brockwell’s are Ivy Hill’s most prominent family and whilst class will ultimately always prevail in this Regency saga, the various members of this largely philanthropic family are a little more generous to the estate villagers and more attentive and caring towards their staff, than many of their landed gentry counterparts. It transpires that the two Brockwell sons, heir Sir Timothy and his younger brother Richard, share an unspoken and closely guarded secret, about which neither has spoken for many years, with each in ignorance of the others knowledge of the matter. It is from this single act of betrayal by a third party, that whilst Timothy treads the path of least resistance and wisely holds his council, Richard chooses the future which he knows will most irk and rile the betrayer and forges for himself a reputation which is self fulfilling and only designed to add to, rather than lessen his feelings of hurt and grief. Thus the brothers are rather set at odds with one another, although neither knows why, creating a compelling backdrop for a storyline which is perceptive, clips along at a good pace, and is written with total maturity and intuition.

Leaving his self-imposed exile in London to come home to Ivy Hill for Christmas, for what is the first time in some while, Richard has his long buried demons forced out into the open, where he has to reconcile them with his conscience. In so doing he must accept that those he has wronged in the past have chosen to forgive him, even though he is struggling to forgive himself. Until he can come to terms with and accept the random acts of kindness which are bestowed upon him, he can never move forward to be the man he is truly destined to be, rather than the penance he thinks he needs to shoulder, as he silently searches for atonement from the sins of the fathers and eventual reconciliation with his family.