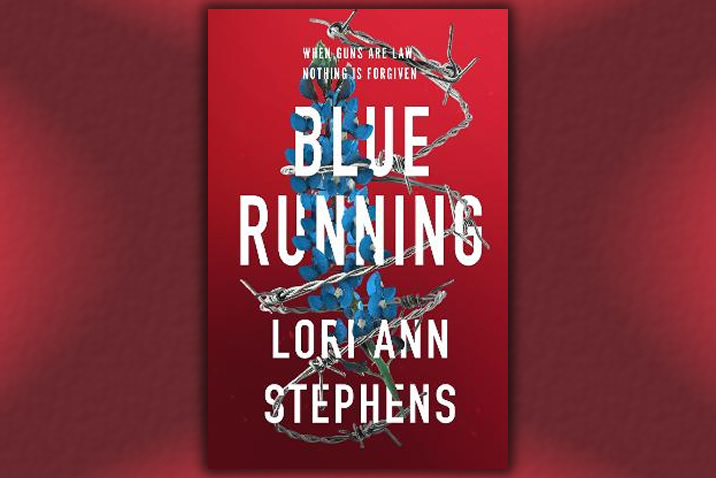 My thanks go out to Sofia, representing Midas PR, for saving me a place on this lovely Blog Tour schedule. 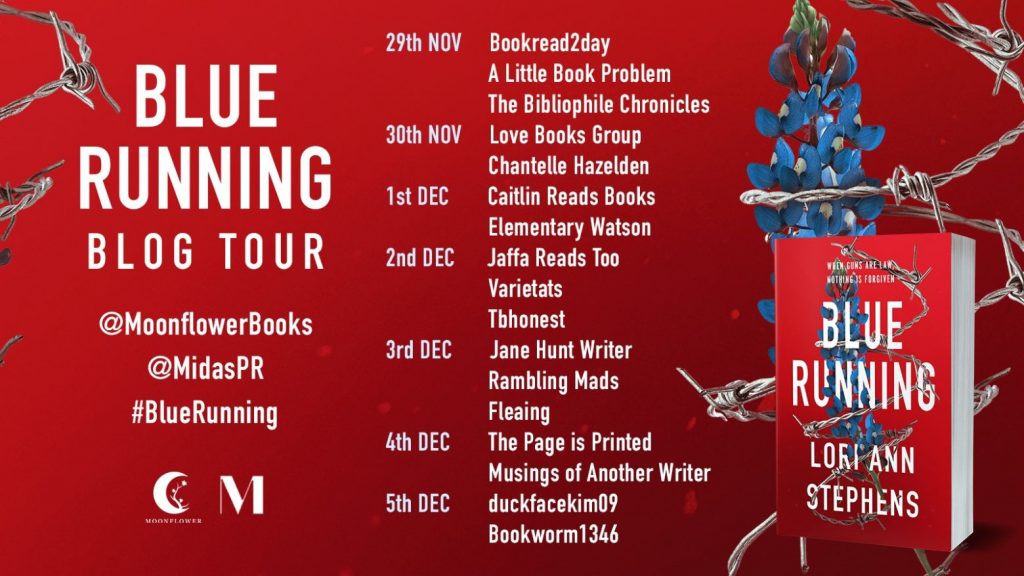 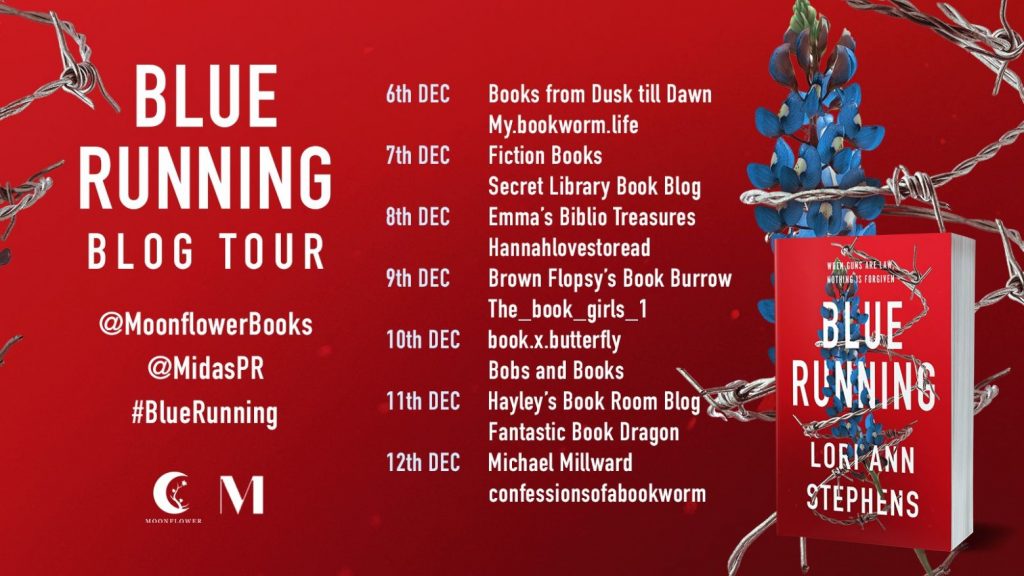 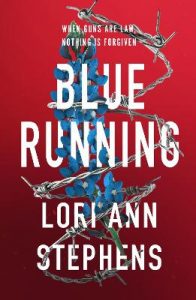 In the new Republic of Texas, open-carry gun ownership is mandatory, fundamentalist religion is the norm, violent motorcycle gangs terrorise the towns, the police are corrupted, and vigilantes guard the Wall that keeps people out and in.

It is in this setting that Bluebonnet Andrews has grown up in the small town of Blessing with her alcoholic deputy father, her mother having fled the country just before Texas’ borders were closed to the rest of the world.

When a firearm accident kills Blue’s best friend, the Texas Rangers accuse her of murder. The penalty for murder is death, regardless of your age. Terrified, Blue goes on the run. In this journey away from the only home she has ever known, Blue joins up with a Latin American teenager named Jet, who is also on the run. Blue’s vague plans of crossing the border and finding her mother are galvanized by Jet’s situation: the 16-year-old is pregnant. She needs to cross the Wall into America, where abortion is still legal. But is freedom of choice worth dying for? 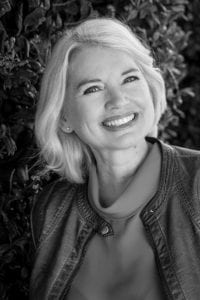 Lori Ann is a Texas girl and an award-winning author of novels for adults and children.

Growing up in Garland (a suburb of Dallas) gave her a lot of fodder for “place” in her fiction. The sheer vastness of the suburb and her own shyness as a young girl made Garland both a wilderness and a city of isolation.

When she’s not writing or teaching writing, Lori Ann reads, takes on DIY home remodelling adventures, and eats the best gourmet, home-cooked meals, although she is usually not the cook.

She lives in Texas with her family and this is her first book to be published in the UK.

“In Blessing, we were all under the eye or the heel of God, and neither was very comfortable”

“I once had a mother who loved me.

“She just didn’t love you enough,” Daw liked to say. He’d sniff and smirk like a father does when he’s confronted with the mysterious eyes of his fourteen-year-old daughter. Then he’d crush his beer can under his boot. That was the start and the end of any conversation about my mother.

She didn’t love you enough. The crush of aluminium. The smell of warm beer”

“The God’s truth was the truth the Republic lived by, the truth on the TVs and at schools, the truth written all over our constitution after the Great Secession. The Plain truth, which Daw grunted about at home after a few beers, was a little more raw. The Plain truth always seemed to be followed by bribery and lies and corruption, which made Daw fume. I didn’t understand half the things Daw ranted about, but I knew that the God’s truth wasn’t always the whole truth”

“Daw wasn’t capable of taking care of himself, much less me. I’d been taking care of him for years. Tucking him in, sewing him up, hiding the bills. Cooking, cleaning, tossing out dead mice and resetting the traps. And I hardly ever got angry with him because Daw was cracked and it wasn’t his fault. But I was cracked too now, and it was like my insides were leaking through. All the love and worry and fear and regret, all of everything I hoped Daw would do for me one day, was floating away”

“She swallowed, then set her burger down and looked right into me, past my eyes and into the real Blue. “Every child deserves to have a home. Every child deserves a safe place to live and good food and clean clothes and an education and spiritual guidance. And love, Chris. It’s not your fault that you’re alone.”

“Listen up. Airlines never cared for but two things: greed and regulations. They didn’t like the Secession, but they sure stuck around long as there was money to be made. Hiked their rates so high nobody could afford to fly and then blamed it on the Republic. And then those fake regulations about firearms. Unconstitutional! I mean, nobody’s going to hijack a plane if everybody’s armed”

“I was like two ends of a ribbon, a bow untied. Frayed at the ends.  I could never tie it back for Marla, never pretend to be a perfect daughter. This time, I’d abandoned her and all her dreams, and that was terrible. But I’d tied the other end of the ribbon to Jet, and I would sacrifice everything not to let go of her”

“When guns are law, nothing is forgiven”

In recent months, I have been commissioned to read so many books which have taken me way outside my comfort zone, but which have surprisingly turned out to be real game-changers for me. It has taught me that there should be no barriers to my reading – only time, which none of us can cheat!

Blue Running, had me visiting  a Dystopian future, where Texas has seceded from the USA and formed a new independent Republic. Carrying firearms visibly, is law for over 14-year-olds. The internet doesn’t connect to anything outside of the Republic. The Wall between Texas and the US is guarded against ‘scalers’ at all times, and out of State air travel is now a thing of the past. Immigrants are not tolerated and exist on the margins of society, and abortion is illegal. Law enforcement is almost uniformly corrupt, despite God’s Truth being the new default. Motorcycle gangs, with ‘mother’ being the most feared, rule with extreme violence and hand out their own style of justice, sentence and retribution, almost with impunity.

A powerful, fearless, chilling and brutal work of future-world, cultural, literary fiction; this story hits the ground running and whilst the pace of the action never seems to be too frenetic or rushed, it is frighteningly and often sickeningly realistic in its mood anger and violence, moving along briskly, fluently and seamlessly, pulling no punches along the way. To give away anything about the ending would spoil the entire journey, this is a finale you need to read about for yourself, as it leaves Blue faced with the terrible dilemma of whether ‘blood truly is thicker than water’, an unenviable place to be for one so young!

This is essentially the unconventional and heart-breaking story of two teenage girls, from very different backgrounds, each with their own cross to bear and reasons for fleeing, but neither at fault for the individual predicaments they find themselves in; only knowing that if they stay in the Republic, their eventual fate is going to be final and permanent. Between them, they have been victim to and suffered so much in their young lives; from abandonment, neglect, wrongful arrest and abuse, to sexual assault and racism. They are destined to meet as their individual journey’s have just begun and against all the odds get along, agreeing to pool their resources and together undertake the desperately dangerous decision to cross the Wall into the US, whilst being pursued by both mob gangs and the law as they do so.

This unique, well-structured, multi-layered story, is intense and highly textured. It is rich in atmosphere and detail, totally immersive and has such excellent visual depth to the writing, that the pages almost came to life in my hands and I could imagine myself alongside Jet and Blue as they try to make good their escape, whilst not really wanting to be there, such was the aura of fear and stress which constantly surrounded them and often threatened to overwhelm them. There were one or two moments of quiet introspection as the girls each began to break down the barriers the other had placed around herself, getting to know one another and bonding. But those snatched minutes were few and far between and author Lori Ann knew just when to ratchet up the tension to another level, then the chase was on again, as danger was never far behind them.

The perceptive narrative and intuitive dialogue is completely mesmerising and disturbing, yet compelling in its naivety, which is its real strength, with nary a wasted word. The evolving relationship between Blue and Jet would be beautiful under normal circumstances, however dread, menace and despair, were their constant companions, so learning to trust one another was about as committed as it got for them.

Lori Ann has created a complete multi-faceted cast of characters, who are almost totally unrelatable to anyone from outside the Republic, who have little synergy or loyalty between them, who are not easy to connect with, and who spend all their waking hours desperately searching for that elusive sense of belonging and inclusion. Devoid of all heart and humour, they are emotionally starved, damaged and complex, deep but with no real depth of feeling. Living for the day, raw and vulnerable, yet totally unreliable and manipulative.

As a reader who was ‘listening’ to their voices, I felt no real connection to them, or between them, only a heartfelt sense of sorrow and anger, that in the future, parts of the ‘civilised’ world as I know it, might become so uncaring, insular and self-protectionist.

What makes reading such a wonderful experience, is that with every story, each reader is taken on a unique and individual journey towards a common outcome. A small handful of books are so difficult to define without that journey having been made personally, and this is one such story. So I recommend that you read this one for yourself and see where your journey leads you!

A complimentary paperback copy for review, was kindly provided by Midas PR, for which I thank them.