My thanks as always to the lovely Noelle, representing Bookouture, and the NetGalley team, for saving my place on this tour. I love working with you all! 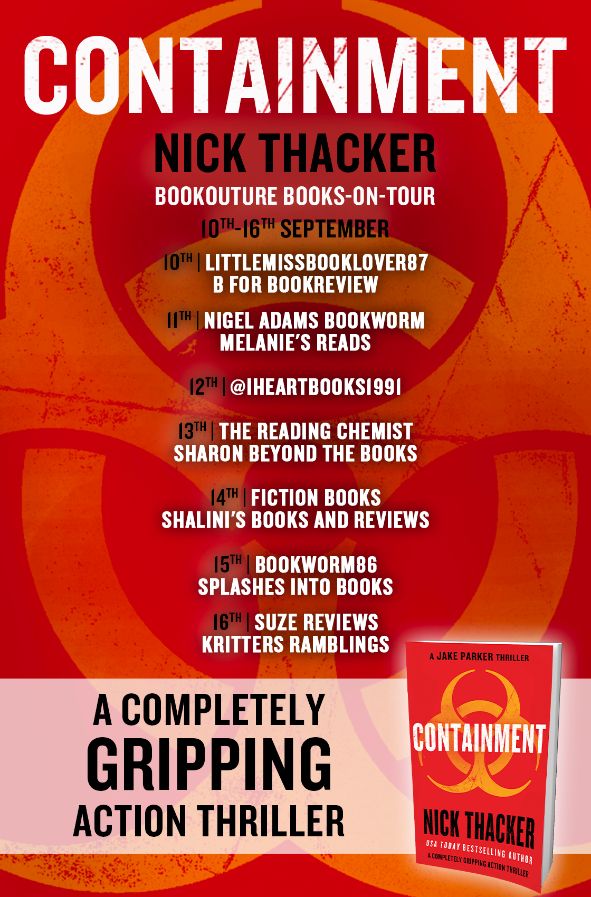 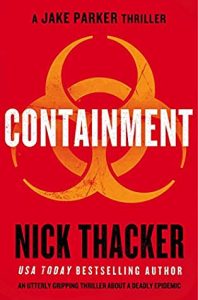 When there’s nothing left to lose, there’s no limit to what you’ll risk.

Jake Parker’s world collapsed with the violent death of his wife during a police-led raid. In the awful aftermath, he hung up his detective’s badge for good. Now ex-military, ex-police, he has embraced a simple civilian life. But when a deadly new disease begins to threaten American lives, Jake is dragged out of his self-imposed retirement.

When a young family at a remote detention center die from a mysterious illness, Jake is contacted by a government official to launch a covert investigation. An unknown disease has entered the system, causing agonizing death and visible signs of blood pooling beneath the skin, and it seems to be spreading. If Jake can’t get on the ground quickly to eliminate the threat before it becomes an epidemic, countless more innocent lives could be at risk.

With the help of medical professor Eliza Mendoza, Jake heads to the border, but what they uncover there is evidence that this devastating disease is man-made, and part of a calculated plot aimed right at the heart of government. With powerful forces ranged against him, Jake must use all his ingenuity to bring down the ruthless organization behind the attack. Failure is not an option. 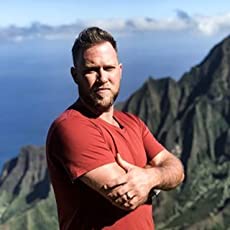 Nick Thacker is the USA Today Bestselling Author of action-adventure thrillers and mysteries, including the Harvey Bennett Thrillers series.

Nick lives on a volcano in Hawaii with his wife, children, and two dogs.

CHAPTER ONE – SIX DAYS AGO

“Liz, put that bloody map away and help me read the signs!”

Liz pouted in the front seat, but she obliged her husband. She could tell Paul was stressed; he was always stressed.

The roads here didn’t help, either. She couldn’t make sense of where they were, even though everything was in English.

“He had nowhere else to be, nowhere to go. Nowhere he wanted to go, and yet he felt trapped.”

“He did his best to temper his conscience with a healthy dose of reality by at least following along with current events. It had allowed him to develop, over time and with a lot of experience, a great sense of what really mattered, how to fight against those who wanted to take that away, and how to stay alive while doing it.”

“Never work alone,” Jorge had told him. “When you take a case, and you don’t already have a partner assigned to you, make two calls: find someone you can trust, and get them on your side early.”  Jake remembered nodding along as his mentor gave him the tip. “And the second call?” Jake had asked. “Find someone smarter than you to be your asset. Someone uninvolved in the case, and get them involved.”

“Jake’s head rolled back slightly. He was starting to understand a bit more about who he was now working with, who Shaw had found to help them out. He didn’t know what it was, but he didn’t really want to argue with her. Something about her attitude, her entire demeanor, made him want to run in behind her and do whatever it was she told him to do. There was no doubt in his mind of her intelligence and experience, as well as her determination. But he was also starting to believe her. He was starting to trust her.”

“That pandemic had been caused by a virus that was highly contagious but not terribly deadly. This one seemed to be the exact opposite: not terribly contagious, but with a hundred percent death rate.”

“Blur the lines, and the unseen becomes seen.”

“What would you do?” he asked her. “How far would you go for what you believe in?”

“The panic is the pandemic, and that will lead to change.”

“How far would you go for something you believe in?”

This is another of those books which I managed to read in a couple of sittings and another new series which I hope will continue to flourish, as I really need my next fix of Jake Parker – and soon please!

This book ticked all the boxes for my ideal reading scenario: A great opening which set the scene and placed the characters; a fast paced, action packed storyline; and a satisfying ending with not too many loose ends (only the romantic kind of course!). Oh! and in this case, given Jake’s knack of attracting trouble, my fourth criteria definitely also applies – You can’t be dead!

Short, punchy chapters, which far from making for a disjointed, ‘bitty’ storyline, kept things moving along fluidly and at a cracking pace.

Real and identifiable places made connecting with events so much easier and definitely more interesting, as I had my maps up much of the time, following the action from place to place.

The intense, multi-layered storyline, was rich in atmosphere, crackling with tension, and bang on trend for these troubled times. However it did make the assumption that Covid 19 had been and gone and was a thing of the past, which was slightly disconcerting, especially as Jake is investigating outbreaks of a new and much more deadly virus, which looks as though it is about to be unleashed, hot on Covid’s heels!

When the true nature of intent with regard to this deadly, brutally fatal organism is uncovered, the repercussions it might engender, are not to be countenanced, as they have the propensity to extend far beyond one nation and cause a diplomatic incident of horrendous proportions. The last thing the US government needs is the grenade called ‘ethnicity’ being thrown into the room!

The narrative was crisp and to the point, with not a single wasted word, no lengthy flowery sentences, although everything was still very visually descriptive and fully fleshed out.

The dialogue similarly, didn’t waste time with too many banalities or unnecessary exchanges. Ideas and information were relevant, and personal dialogue was meaningful and potentially either relationship building, or friendship destroying.

The characters were multi-faceted, complex, driven, emotionally damaged from past life experiences, and therefore quite difficult and challenging to connect with, despite being well defined and developed. Everyone was in this game for themselves it seems, even though they all had their own differing motives. Briggs truly believed with his esoteric reasoning, that he was working towards  the common good and a change in the bureaucratic system, although he wasn’t quite prepared to pay the ultimate price demanded for his selfish single-mindedness. Beau has his own reasons for throwing in his lot with Briggs, but I truly believe that he had a moral issue with the way events were going, especially when he has to deal decisively with his one time friend and colleague, Jake. Life has little meaning left for Beau and the ultimate sacrifice isn’t up for discussion.

For Jake and Eliza, being literally thrown together to try and unravel the plot and the motives which drive it, means that their individual solitary lifestyles, have to be placed on hold, a concept which is initially unthinkable for both of them. Jake is still grieving and hurting from the loss of his wife and Eliza is totally career focused, giving neither of them the will or requirement for a social life, much less a relationship. However, the chemistry between them kicks in automatically and immediately, as much as they both try to deny it. They really are operating on the same page from the word go though and it doesn’t take Jake long to figure out that in Eliza, he has met his match in so many ways. Eliza knows what she needs to happen, in order for her to work out exactly what they are dealing with on a humanitarian level and she expects Jake to defer to her when the science has to take centre stage. Equally, Jake is very much in charge of outing the villains, unmasking the plot and clearing up the mess left behind. That includes protecting a very stubborn Eliza, who proves more than able to take care of herself and is beginning to melt his heart of stone. The slow burning beginnings of a future, dealt with sympathetically and nurtured with great care by the author. Any future which beckons for Jake and Eliza, is never going to be plain sailing or boring! I really became invested in these two characters and hope that any future storylines feature them working together again.

Author, Nick Thacker is certainly skilled at making a little mean a lot, with every word made to count. So although I had worked out most of the plot by about half way through the story, getting to the end game was still great fun, as I needed to tie up a few of the loose ends and just make sure that I had put everything into the right boxes, which par for the course, I hadn’t quite managed!

Even though this was a storyline with quite a prescriptive roadmap, I still found myself on a very unique and individual journey, led by a consummate storyteller.

A complimentary download of this book for review purposes, was kindly made available by Bookouture and supplied by NetGalley