Cross My Heart
by D.K. Hood
Books On Tour
Review 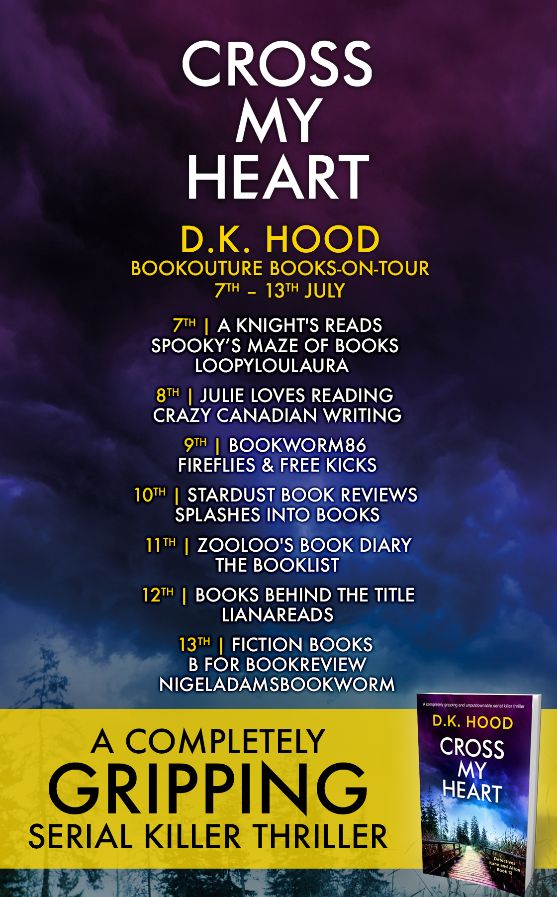 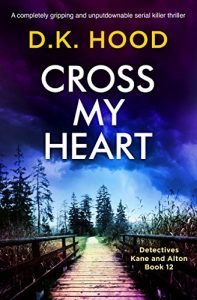 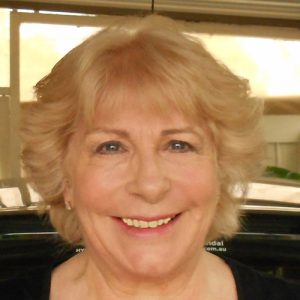 Born in London, author D.K. Hood travelled extensively before settling in sunny Australia, where she lives very quietly with her husband and has a small but beautiful garden filled with birds and water dragons.

Her interest in the development of forensic science to solve crime goes back many years.

D.K. Hood is an active member of International Thriller Writers.

“I love writing about the rugged beauty of Montana and my interest in the development of forensic science to solve crime goes back many years. It was one subject I enjoyed studying and with the constant advances it never gets boring. With many stories, waiting for me to write, I’ll look forward to sharing more exciting crime thrillers with you.”

“Wind battered the small tent and howled through the trees, peppering the sloping sides with pine needles. The tent bucked so hard it could’ve blown away in a split second – but it wasn’t the weather that had dragged June Harris from sleep, it was the the thud and desperate cry…”

” Lungs bursting from lack of oxygen, June ran through the forest again, screaming until her voice became a raspy croak. He’d kept her tied up all day and held meaningless conversation with her as if they were friends. He’d waited until nightfall to play his sick games with her again…”

“He’d play with her for a while, make her believe she could win, and then he’d draw his trump card. He couldn’t wait to be there at the end, watching her as she took her last breath and knowing that evil always triumphs”

“This is Black Rock Falls, remember?” Kane narrowed his gaze at his friend. “Just when you think everything is back to normal, something weird happens and the nightmare starts all over again.” “So, it seems.” Carter grimaced. “Cute little town you have here.”

“It was a perfect day for hunting humans”

“She might have investigated more murders than most sheriffs, but she never at any time forgot the victims were people”

“I do have respect for people’s talent, but to me everyone is equal no matter their rank or position in life”

“It was a perfect day for hunting humans”

Oh My Goodness! How I so wish that I had been in on this series right from the beginning, as this tight knit little team of crime busters tick all the boxes and then some, for me!

Don’t get me wrong. This book works more than well as a stand alone story. However all those tantalising titbits of backstory, which are woven into the plot so adroitly by the author, only made me want more, and I strongly suspect that this series has just been getting better and better with each new episode.

I hit the ground running right from the very first page. The action was then non-stop and frenetic throughout, with so many heart-stopping moments that I don’t think I actually had time to draw breath until the very last line had been devoured. Especially as I do quite like my protagonists to live to fight another day and on this occasion Jenna and Dave only made it out by the skin of their teeth.

There is no doubt that this author has a very vivid and one might almost say, ‘twisted’ imagination, in a nice way of course, and I loved the direction she took with this well structured storyline, which definitely stirred all the emotions along the way. A wonderfully textured, truly gripping and desperately intense experience, written by a born storyteller, with consummate ease, complete confidence and total authority. The complexities of introducing multiple suspects in such a unique way, certainly tested the mental stamina of both Jenna and myself, as neither of us really knew what was actually happening until almost the eleventh hour, so we were both left clinging to reality by a thread for much of the journey through this mind-bending, killing frenzy. When events from the past come back to haunt their present and indeed, their very future, Jenna and Dave need to keep their wits about them and stay strong for each other, which Dave in particular prides himself on being able to do. Jenna however, is definitely not out to take any prisoners this time, forcing all of her doubts and vulnerabilities to one side, especially when their adversary sets out to convince her that her troubled mind is playing tricks on her.

It sounds as though this rural area of Montana has seen more than its fair share of serial killers, however Jenna and Dave, as law enforcement officers with a past they would rather have left behind them, definitely seem to be attracting more than the usual amount of attention from a disparate cross-section of the criminal population, all with one thing in common – the thrill of the hunt and the sickening satisfaction of the kill! When off duty, they live as virtual prisoners inside a remote and highly guarded, hi-tech compound. When on duty, they have the support of a highly qualified, professional team, whose hard work and loyalty are unparalleled, which is just as well when the body count is stacking up and disturbingly, your main suspect is tucked away in virtual solitary confinement, behind bars.

If you are an ‘armchair traveller’ with a nervous disposition – beware! Skilled at channelling the powerful imagery of her words, the author exploits some assured, observational and descriptive narrative, to evoke a genuine sense of time and place, putting me at the front and centre of the action, in the dark and foreboding mountains of Montana during the dry storm season, where every crack of thunder or bolt of lightening had the potential to start an uncontrollable fire, or at the very least frighten me into running for cover knowing that there is at least one sadist out there, hunting me with both gun and crossbow and a crack shot with both!

The author has developed an excellent cast of totally believable and lifelike characters to populate this series, who have obviously grown into their roles over the course of time. Even taking into account the more than slightly shady reputations many of them seem to have acquired previously in the various security and agency sectors they are drawn together from, I found myself liking and relating to them all, even though I probably shouldn’t have. The synergy between them, together with the unspoken, tacit understanding of any given situation, was like bearing witness to a silent film, as they each went about their individual tasks in hand, towards capturing an assailant who had made this personal vendetta against Jenna a ‘do or die’ mission, and which they had collectively decided means, ‘take on one of us, be prepared to take on all of us!’

No good story would be complete without the inclusion of a canine companion and in this instance, Dave’s bloodhound Duke, proves to be as protective, faithful and obedient as any handler could wish for.