‘Dance The Moon Down’ by Robert Bartram

‘DANCE THE MOON DOWN’

In 1910, no one believed there would ever be a war with Germany. Safe in her affluent middle-class life, the rumours held no significance for Victoria either. It was her father’s decision to enroll her at university that began to change all that. There she befriendes the rebellious and outspoken Beryl Whittaker, an emergent suffragette, but it is her love for Gerald Avery, a talented young poet from a neighbouring university that sets the seal on her future.

After a clandestine romance, they marry in January 1914, but with the outbreak of the First World War, Gerald volunteers and within months has gone missing in France. Convinced that he is still alive, Victoria’s initial attempts to discover what has become of him, implicate her in a murderous assault on Lord Kitchener resulting in her being interrogated as a spy, and later tempted to adultery.

Now virtually destitute, Victoria is reduced to finding work as a common labourer on a run down farm, where she discovers a world of unimaginable ignorance and poverty. It is only her conviction that Gerald will some day return that sustains her through the dark days of hardship and privation as her life becomes a battle of faith against adversity.

Born in Edmonton, London in 1951, Robert spent several of his formative years living in Cornwall where he began to develop a life long love of nature and the rural way of life. He began writing in his early teens  and much of his short romantic fiction was subsequently published in various periodicals, including “Red Letter”, “Secrets” and “People’s Friend”.

Never one to let the necessity of earning a living get in the way of his writing, Robert has continued to write for the best part of his life whilst holding down a succession of jobs including health food shop manager, typewriter mechanic and taxidermist – Yes, you read that correctly.

.
His passion for the history of the early twentieth century is second only to his love of writing and it was whilst researching this period that he came across the diaries and letters of some women who had lived through the trauma of the First World War. What he read in them inspired him to write his debut novel “Dance The Moon Down” and the rest, as they say, is history.

.
Robert is single and lives and writes in Hertfordshire.

It was during the spring of 1910 that it became the subject of heated debate between Victoria’s parents as to whether or not she should attend university and continue her education. Her father had been a staunch advocate of the idea, whilst her mother had vigorously opposed it.

Eventually, her father had prevailed, but in spite of their differences, both had their daughter’s best interests at heart. However, it was scarcely possible that either of them could have foreseen that this innocuous decision would be the catalyst for a sequence of events that would ultimately propel Victoria from her staid suburban life into a world she was totally unprepared for.

It’s not enough to expound on the beauty of one’s country, if you’re not prepared to defend it.

The only time anyone negotiates is when they know they can’t defeat you in any other way.

Nothing is impossible for those who try.

It’s just as well to tell the ones you love how you feel about them whenever you can, because you never know if it’s the last time you’ll be able to do so.

She wondered if the world would ever become what people in their heart of hearts truly wanted it to be, or if it would remain as it was now, the creation of their greed, anger and stupidity.

“Because they’re men of honour, fighting a war created by men without honour”

There were simply so many poignant, profound and thought provoking words in this book, that I could have gone on quoting them forever, such was the power and emotion behind the unfolding story.

Whilst for me ‘Dance the Moon Down’ is essentially a character driven story, a sense of time and place is more than convincingly evoked in Richard’s meticulous and well presented research, his keen attention to detail and his acute observational skills which offer a thoughtful social and political commentary of the times. The essence of a far off and unspeakably terrible war, is there in the many inferences and references which Richard so skillfully introduces into the narrative, however I never felt encouraged to lose sight of the fact that ‘Dance The Moon Down’, is primarily a story with the plight and struggle of those left at  home behind the battlelines, very much at its heart.

In Victoria, Robert has created a well defined female protagonist, with supreme strength of character, a strong and unyielding faith and hope in the love she shares with husband Gerald, and an unswerving and unsurpassed loyalty to her friends and comrades. A mutual strength and respect between Victoria and the many women destined to cross her path in this, their time of  crisis, is what will keep them focused and believing that one day, they will be re-united with their loved ones.

Even in times of strife and hardship, human nature decrees that there must ultimately be some lighter moments and for Victoria, this is no exception…

A woman ahead of her time, Victoria has enjoyed a privileged and educated background; has given serious and well considered thought to the concept of women’s emancipation; has undertaken supremely hard physical labour when the demands of both war and her own diminished personal circumstances have required it; and yes! surrendered to moments of physical and emotional weakness when it seemed that battle had wreaked its ultimate price on both herself and Gerald and she was left feeling at her most vulnerable.

With the very limited news from the front, seemingly being disclosed almost exclusively on a ‘need to know’ basis, with spouses, family and friends, seldom considered of high enough importance to often warrant being given any news of the fate of their loved ones immediately, in fact often many months, sometimes years later, the inevitable was bound to happen! … Not only for Victoria, but for so many other wives and sweethearts the World over!

History lessons have made me aware of stories about women who, after many years absence and silence, being convinced of their husbands or sweethearts death, have gone on to remarry, to offer stability to not only their own lives, but to those of their children …. Only to discover that their husband or loved one, has not in fact perished and is to be re-united with the family they believe they still have waiting for them, where they expect to be welcomed with open arms!

This almost total lack of communication between the brave souls fighting on the frontline and their loved ones left toiling at home to help sustain a vulnerable society left behind, is a continued source of chagrin to Victoria, who determines to fight her way right to the top of the command chain, in order to exact sea change from the predominantly male dominated heirarchy. In doing so, she risks the wrath and ire of  those in authority, but it is perhaps her tenacity and persistence, which helps bring about change for so many other families finding themselves in a similar position.

For so many, the knowing may not offer up the outcome they may have so desperately been hoping and longing for, however the not knowing must be ultimately so much worse and simply soul destroying.

For Victoria? … Well, to tell would simply be too much of a spoiler!!

Robert Bartram’s writing has a descriptive style and an ethereal, haunting beauty all of its own …

As readers, we are conditioned and accepting of the vast contingent of female authors, who write in the genres once considered to be the sacrosanct domain of the male writer, and who carry it off so successfully. However, there is still some lingering reticence for us to embrace the male author, who chooses to write in what might be considered the traditional female genres.

That Robert Bartram has taken this as his chosen path with ‘Dance The Moon Down’ a war time romantic fiction novel, and has defied any critics among us with his phenomenal success and almost unanimous acclaim, is quite an achievement.

As this was an author invitation to read and review, a PDF of ‘Dance The Moon Down’ was sent to me free of charge, by its author, R.L. (Robert) Bartram.

Crime fiction’s most original detective is back 💥

Teaser Answer
Here's hoping you all have something nice to look out upon, even if it's just the sky! 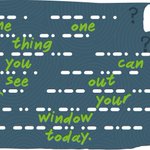