Daughters Of The House
by Michele Roberts
Review

DAUGHTERS OF THE HOUSE

Booker Prize Finalist, Daughters of the House, is Michèle Roberts’ acclaimed novel of secrets and lies revealed in the aftermath of World War II.

Thérèse and Leonie, French and English cousins of the same age, grow up together in Normandy, at a time when France is struggling to come to terms with the legacy of war, from collaboration to loss.

Intrigued by parents’ and servants’ guilty silences and the broken shrine they find in the woods, the girls weave their own elaborate fantasies, unwittingly revealing the village secret and a deep shame that will haunt them in their adult lives. When they each have a vision in the woods, they find themselves at variance with each other. Whose story will be believed? Whose version of the truth will prevail? 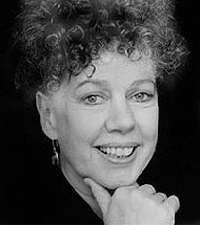 Michele was born in 1949, twenty minutes after her twin sister Marguerite, to a French mother and an English father. She grew up in Edgware, north-west London, although summer holidays were spent at the house of their French grandparents in Normandy, near Etretat in the Pays de Caux.

She read for a B.A. in English Language and Literature at Somerville, Oxford, then spent two years studying to become a librarian. She knew that she wanted to write, but decided after a year spent working for the British Council in South-East Asia, during the height of The Vietnam War, she needed to give up any idea of working as a librarian and instead began travelling, earning her living from a variety of part-time jobs.

Combining a variety of jobs, including journalist, reviewer and critic, Michele also became involved in a writers’ group, writing short stories, and working on her  first novel.

Life as a writer was very hard at first, however when Daughters of the House was shortlisted for the Booker Prize in 1992 and won the W.H.Smith Literary Award in 1993, she could finally give up the part-time jobs.

Michele has travelled extensively and has held positions as, Emeritus Professor of Creative Writing, chair of the British Council’s Literature Advisory Committee and as a Fellow of the Royal Society of Literature and a member of PEN and The Society of Authors. She turned down an O.B.E. because she is a republican, but was honoured to be made a Chevalier de l’Ordre des Arts et des Lettres by the French government.

She has been married twice, has two stepsons, is close to her nieces and nephews, and spends as much time as possible with her friends. Friends are crucial to her, a source of great pleasure. As a writer she needs a great deal of solitude but in the evenings she likes to get out and have a good time.

“Love goes on. The love of friends. Friendship is my oxygen. I’ve said that often and it’s true. Writing goes on too: I keep on building my paper house; my chrysalis.”

As arguably one of the most successful and influential of Michele’s novels to date, I guess I expected this to be a work of some worth and consequence and I can’t say that I was disappointed. It has certainly made me eager to gather together some of her other novels, to add to my ever increasing TBR list.

It tells the story of two cousins, one French, the other English, raised together for much of their lives, by their respective mothers, at the family home in France.

Twenty years later, the French born cousin Therese, has spent much of her adult life as a nun, living in a convent, whilst Leonie, the English born cousin, has continued to live in the family home, with her husband, children and mother.

Now, Leonie’s mother Madeleine is dead, and both women want the family home to be theirs, so we find Leonie taking an inventory of the contents of the house.

The items on her list, become the chapters for the novel, and tell the story of the childhood memories they evoke.

I liked the way that the opening and final chapters of the book are set in the present day, with the middle section being devoted to the childhood events and memories, which all lead up to the current situation.

The chapters are kept short, with concise, high impact sentences, which kept my attention focused and meant that I could dip in and out of the book, although I would love to have read it in a single sitting.

It was also the first book that I can recall having read, that has no dialogue punctuation, which at first was a little disconcerting, but then became unnoticed.

When they are young, the cousins are very close, bound together by their exclusion from family secrets. Conversations held quietly by the adults tell of wartime secrets, room are designated ‘out of bounds’ and the woodland shrine a place of awe and horror.

As they approach teenage years, their friendship becomes more strained and loyalty is given more sporadically and grudgingly. Underlying jealousies begin to surface and secrets threaten their relationship.

When the shrine in the woods yields it’s terrible secret, the links it uncovers to the house and family, start to strip away the veneer of respectability and divide the girls’ loyalties even more.

The last vestiges of friendship between them are destroyed, when an even more terrible secret, this time about their birthright, is uncovered.

After all these years apart, both daughters still only have some of the pieces, but not enough to complete the jigsaw of events, so there can be no peace or reconciliation, for either of them. A complex set of clues lead to many possibilities, but no definitive conclusions, driving each to try and purge their demons, with horrific results….

To me, the novel is solely about the relationship between the two girls, other areas are touched on, but seem of no real consequence to the theme. The characters are all well defined in their roles and where they fit into the overall sequence of events and each are endowed with their unique dangerous energy, which is both subtle and persuasive, whilst being intense and compelling.

A fantastic read, I was sad when it was over.