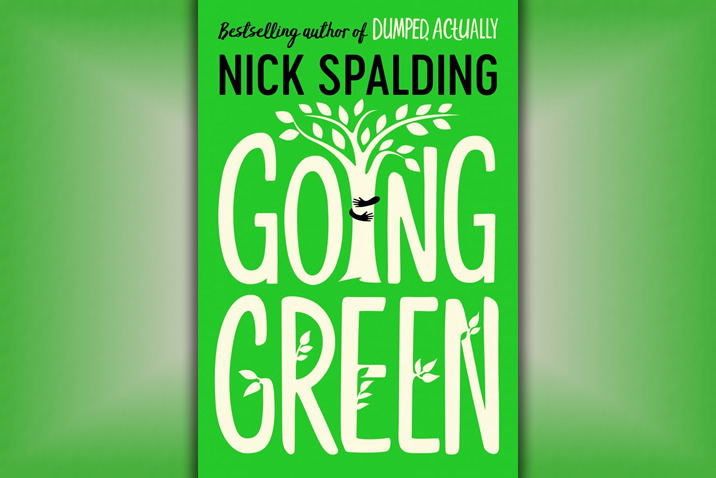 This book has sadly been languishing on my Kindle TBR mountain for some time now, definitely far too long! It was downloaded thanks to the ‘Read Now’ option, made available by NetGalley and Amazon’s Lake Union Publishing 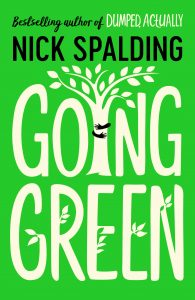 Meet Ellie Cooke. When it comes to all things environmental she’s, well, a bit ‘green’.

It’s not that she doesn’t care about things like climate change and plastic pollution, it’s just that life has always got in the way of that sort of thing.

But when the PR firm Ellie works for is taken over by keen environmentalist Nolan Reece, it’s clear that if she wants to save her job, she’s going to have to get serious about being green—or face being recycled.

Going green is no walk in the park, though. It involves a lot of big changes, tough choices…and at least one case of accidentally showing your knickers off to your boss.

Can Ellie do enough to save her job, and maybe do her bit to help save the planet while she’s at it? And what will Nolan think of her, now that she can’t stop thinking about him…? Nick Spalding is an author who, try as he might, can’t seem to write anything serious.

Before becoming a full-time author, he worked in the communications industry, mainly in media and marketing. As talking rubbish for a living can get tiresome (for anyone other than a politician), he thought he’d have a crack at writing comedy fiction – with a very agreeable level of success so far, it has to be said. Nick has now sold over two million books – including a million books sales with Amazon Publishing alone. This flabbergasts him every single day.

Nick lives in the South of England with his lovely (and extremely patient) wife. He’s now in his mid forties – and is rather annoyed at the universe about it, because it gave him no choice in the matter. He’s also addicted to Thai food, still thinks Batman is just about the coolest thing on Earth, and has a dreadful singing voice.

Why do none of these sodding drinks ever come in something made of glass?

Hugh Burnley Fishingstool tells me I should be buying more of my drinks in glass bottles, instead of plastic ones, but how the hell am I supposed to do that when there are literally none on display here in the Meal Deal section of Boots?

I shouldn’t even be spending this much time looking, though, because time is something I most definitely do not have today.

I’m already ten minutes late for work, and I simply don’t have the precious minutes to waste peering at the refrigerator section, trying in vain to locate a smoothie that isn’t contained within the dubious confines of a single-use plastic bottle”

“I should  be happy about this, but I’m comprehensively not – because any workplace that doesn’t care whether you’re late or not is probably a workplace that isn’t long for this world”

“People with causes are always quite easy to get on the right side of. You just have to convince them that their cause is as important to you – if not more so – as it is to them. The rest is ethically produced gravy”

“I’ve learned in life that when you cock something up good and proper, it’s probably best just to own it. Trying to run away from it just stresses you out even more”

“In my newly discovered desire to make the world a better place, I’ve inadvertently made myself a better person”

Those of you who follow my reading schedules and reviews, will know that a contemporary comedy, albeit with a smidgen of the rom/com about it, really isn’t my type of book at all. However, I had heard and read such good things about Nick Spalding’s books, that when one of those not-to-be-missed NetGalley ‘Read Now’ offers came up, I just couldn’t resist downloading it.

This style of anecdotal, observational and conversational comedy, is one I really enjoy, and the way in which we Brits seem to have the unique ability to laugh at ourselves, never ceases to amaze me. But how would it translate into a full length story, I wondered? Well, if you had been anywhere near me when I was reading the book (which I did in just a couple of sittings), you might have wondered who the raving loony was, laughing and chuckling away to herself in the corner and this time the tissue wasn’t for tears of sorrow!

From the very first paragraph (shared above), the play on the name of an English celebrity chef, television personality, journalist, food writer, and campaigner on food and environmental issues, was enough to have me smiling and that just set the tone for the entire story. As you can tell, this one hits the ground running; the storyline is relentless in its pace and humour; the ending is oh! so satisfying and replete, in the rather sickly and cliched way I had come to expect, but not until after that one final curved ball, the sting in the tail I never saw coming – and to be honest, neither did Ellie! The chapter breaks were really only there to give me chance to draw breath and re-group for the ongoing battle, although the chapter headings themselves were an absolute triumph in their own right.

Narrated in a single timeline and voice, by Ellie herself, makes this very much her own story, to do with as she wants. In fact it reads more like a personal diary in storybook format, the kind of thing that should really be kept under lock and key, a ‘for your eyes only’ read! Ellie is very prone to having ‘conversations’ with herself, sometimes not very silently, although she doesn’t always realise she has spoken aloud, and always totally honestly, in a no-holds-barred kind of way. Her thought and speech bubbles would make a great graphic book!

How far would you go to save your job? That’s the dilemma Ellie faces when the PR company she works for is sold and her new boss turns out to be a keen environmentalist, who intends to refocus and transform the business,  to take on PR assignments exclusively for ethical / green brand clients. The thing is, Ellie, by her own admission, is one of the least environmentally green people in the country and is definitely the queen of cheap, chain store clothes shopping when she puts her mind to it. What would anyone faced with that situation do? – Why, lie of course! Ellie becomes an overnight convert, with some very unexpected results (you really shouldn’t miss the itchy hemp knickers debacle!), not all of which are quite so dramatic, but all of which give Ellie pause to stop, think and re-evaluate her life.

The trouble is, when you go from thinking about taking action, to actually taking action, sometimes the lines become a little blurred, the scales of reason can get tipped too far the other way and passion becomes obsession. Then when you find you have been right royally deceived by someone you thought you could trust, flipping out is only the beginning of a journey which can either make you stronger, or cause you to crumble. You really don’t want to be in Ellie’s path when the flipping out starts, that’s for sure!

Nick has written a fluent, well structured and multi-layered story, which is current, topical and bang on trend, but never preachy and always told with heart and humour. There were plenty of subtle twists in the seamless storyline to keep me guessing and because of Ellie’s frenetic and chaotic pace of life, the air was always full of latent tension. Skilled in the imagery of words, Nick’s writing has great visual depth and range, and I could almost imagine myself alongside Ellie – outside the smelly train toilet; egging the crowds on as a giant foam plastic bottle; and with her head stuck down a cess pit – and that’s not even the half of it! I don’t know how much of it is smoke and mirrors, and whether I am doing Nick a disservice, but it feels as though the words simply wrote themselves, as everything flows so well. Such an effortlessly assured and compelling style of narrative and dialogue.

Nick has also created and breathed life into a cast of well developed characters, who more than ably complement his writing style and totally claim the story as their own. Whilst it may not have been easy to connect with and relate to all of them, because of their passionate eccentricities, they were always addictive, authentic, emotional, raw and passionate, with the possible exceptions of the duplicitous scumbags, Nolan and Rob, who really did deserve everything they had coming to them- and then some!

Engagingly Enjoyable; Entertaining Escapism; Enthusiastically Emotional – what other great reasons did I need to read this book.

In the world Nick has created for Ellie, the female of the species is definitely more deadly than the male – and certainly more vocal!

A complimentary kindle download of this book, for review purposes, was kindly made available by the publisher.