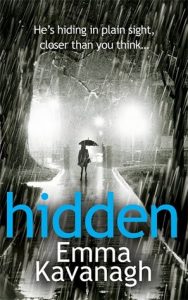 Emma was born and raised in Swansea, South Wales and first announced that she wanted to be a writer at the grand old age of 5. She believes that she was dazzled by the riches that would fall to writers after being awarded a gold star and a lollipop for a 6 line short story. Ah, the ignorance of youth.

Emma took a somewhat circuitous route to authordom. Having decided that if she was going to write then she perhaps needed something to write about, she studied psychology in Cardiff University and then, continued on into her PhD. The logical step, having achieved her much longed for doctorate, was to carry on into psychological research.

She started her own consultancy business, specialising in providing training to police officers and military personnel on the psychology of critical incidents. Her main area of focus was the use of firearms and she spent many fulfilling years travelling across the UK and Europe providing training and consultancy to police forces and NATO. It was, by anyone’s standards, an unusual life.

But still, it wasn’t writing. So, now that she had something to say, Emma faced the demon of the blank screen and started to write her first book. It was not good. It was, however, undeniably a book shaped creation and it gave her the courage to try again. This next book was better, although still, the holy grail of the publisher’s deal remained just out of reach. She took some time off, had her first son, and then, when he was three months old began to write the book that would become Falling, her debut psychological thriller.

“I think the thing I love most about writing is that there is nothing that is beyond the scope of what I do. Anything that catches my interest – a crime, a personality trait, a large-scale catastrophe – can evolve and grow into a story. I also love how writing can be used to expose us to a world in which we would never normally find ourselves, and can give us the opportunity to imagine how we would react to it, how we would cope”

“But then I suppose that is what death does. It makes the forgotten unforgettable”

“Funny how so much can change, in the space of an hour, a minute. How your whole world can be upended by one simple inaction, so that afterwards it seems like there has been a death and that it is you, or who you thought you were, who has died”

“When you get to the end you revisit the beginning, so that all may be in order”

“I stand there, a boulder in a stream of people”

There aren’t too many books I have read, where the endgame of the story, is revealed within the first couple of paragraphs of the opening chapter … well! not quite all, and therein lies the intrigue of Hidden,  for no matter what you know, or what you think you might know, I can almost guarantee … you don’t!

Emma certainly brings all her psychology training and extensive work within the various enclaves of the police force to bear, in the well drawn characterizations, clever plot building and masterful moments of suspense, in this excellent psychological thriller.

Emma tests her audience on so many different fronts and certainly demands full attention from the reader, even down to the chapter headings, which take you back and forth in the story’s timeline, from six days out, to the actual time of the shooting. They also alternate not only in time, but in character narrative, just to keep you on your toes even more, but as the quote from the book says: “So, the world isn’t a simple place. And sometimes, in order to understand what has gone on, we have to understand what those around us were seeing.”

Critically, each time a character was updated by chapter and time, so my own list of suspects grew and changed in priority, with me becoming more firmly convinced of my findings as the story progressed, only to be shot down firmly in flames when the final reveal was disclosed, leaving me a sucker to all those red herrings which Emma had planted along the way.

In this well constructed and plotted, tense and multi-layered story, almost each and every character is damaged goods and comes with baggage, many have secrets to be kept and others carry a sinister desire for revenge and retribution. Yet only one is capable of taking the ultimate step, which crosses the line between reality and an almost urgent desire to push the self destruct button, and I definitely didn’t see it coming from the direction it eventually did!

Emma has created a great cast list of characters, including several strong willed and determined women who do rather dominate the story, often leaving their male counterparts somewhat in the shade, but nonetheless potent for this. Complicated relationships are explored with sensitivity and understanding and the many social problems which the storylines brings to the fore, are treated with the care and consideration they are due.

As this was a publisher invitation to read and review, a complimentary copy of Hidden, was sent to me, directly by Cornerstone.

I personally do not agree with ‘rating’ a book, as the overall experience is all a matter of personal taste, which varies from reader to reader. However some review sites do demand a rating value, so when this review is posted to such a site, it will attract a well deserved 5 out of 5 and a place on my favourites list over at Goodreads!

Written by Yvonne
4 comments
‘Bones To Ashes’ by Kathy Reichs
FacebookTwitter
Through A Yellow Wood
by Carolyn J. Rose
Review