One wild, winter’s night two worlds collide. Known for his ruthless efficiency, Captain George Huntley is sent to stamp out smuggling on the south coast of England. On a night raid, the Captain captures a smuggler, but finds his troubles are just beginning when the lad turns out to be a lass, Hope Tyler.
With Hope as bait, the Captain sets a trap to catch the rest of the gang. But in a battle of wills, with his reputation at stake, George Huntley starts to respect feisty, independent Hope. Challenged by her sea-green eyes and stubborn loyalty Huntley now faces a new threat – his growing attraction to a sworn enemy.

But a love where either Hope betrays her own kind, or Captain Huntley is court-martialed, is not an easy destiny to follow. 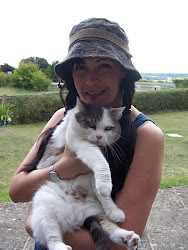 Grace has guest visited many blogs, where she has answered an amazing array of questions about herself and her writing. Personally, I think that one of the most comprehensive of interviews is over at Morgen Bailey’s writing Blog, where Grace gives one of her most ‘frank and friendly’ discussions, with a consummate interviewer.

.. Just one kiss, to prove he could conquer this weakness. For who is stronger, the man with no weakness, or the weak man who overcomes?

MY THOUGHTS ABOUT ‘HOPE’S BETRAYAL’

Hope … To wish for something with expectation of its fulfillment.

Hope … To have confidence; trust.

This is the second installment in the ‘Huntley’ trilogy and having already met the youngest of the Huntley sons, in ‘Eulogy’s Secret’, we are now introduced to the middle son, George. This will be the first time that we are to meet the entire Huntley family en masse and are afforded the opportunity to see them together in a relaxed, familiar environment, where their interaction as a family gives so much insight into their individual personalities, hopes and aspirations for the future.

Jack, the youngest son, is already married to his true sweetheart and soulmate, Eulogy and is living the unrestrained and unfettered life, which comes with the knowledge that none of the family responsibility rests on his shoulders.

Charles, the eldest son, is still something of a mystery, although I instinctively know that he is totally disinterested in his family duties and loyalties, whilst still wishing to reap the benefits which they afford him, so long as he is free to follow his own plans and desires as part of the ‘ton’. I can’t wait to read his upcoming story.

In this book, the author, Grace Elliot, examines the enigma which is George Huntley and the family matriarch, Lady Ryevale. She is well practiced and versed in the ways of making her sons feel that they are making their own decisions, about both their own and estate affairs, whilst she cleverly and quietly, with a few well chosen words and actions,  manipulates almost everything, behind the scenes. Lady Ryevale is under no illusion about the differences between her three sons and yes, the individual weaknesses and failings, which she knows they all possess. In George, she sees a man who is fiercely loyal, with a steadfast view of right and wrong and whilst she does her best to support his decisions, she is also more open-minded and forward thinking than he is in many ways. As the story progresses, I get the distinct impression that she is secretly hoping that George will eventually take over the reins of handling the estate business from her, as she almost certainly recoginzes Charles’s apathy and disinterest in securing the family’s future, although she would never force the issue and actively make demands that George should resign his naval commission, or lapse in his duties to the excise and customs service. She sees in Hope, the latent potential class and breeding which will offer George the intelligent and loyal support he will need to protect and nurture the family affairs into the next generation and so she breaks with society convention to ‘encourage’ the young couple to examine the growing feelings they have for one another.

George Huntley has strong and steadfast principles, which he strives and struggles to uphold, even in the face of his growing affection for Hope. He does put his reputation on the line to keep Hope out of gaol, although he is totally uncomfortable about it and is even more confused and increasingly regretting his decision, when his mother decides that Hope should be nurtured and protected by the family. He just isn’t able to stand up to his mother’s insisting and demanding ways and two stubborn women, working together, are almost more than he can tolerate. He is taken right to the edge of his tolerance when his younger brother, who has himself married outside of his peer group and definitely only for love, sides with the two women, ably supported by his vibrant, charming and thoroughly unassuming wife, Eulogy. George has a tremendous inner struggle with his growing feelings and I did wonder at one point, if circumstances hadn’t changed his career path, whether he would have made the same decisions. It wasn’t until there was the possibility that he may have lost Hope forever, that it becomes clear that what might have been all to easily construed as arrogance, was in fact self restraint, as he fought to be sure of his feelings, before declaring himself to Hope.

Hope, an illegitimate child so aptly named by a distraught mother, who was forced to flee her privileged life, abandoning her noble and titled position, to live a life of penuary amongst a new family, where her daughter will be raised to live on her wits and cunning, where her ideas of right and wrong may be called into question, but where her choices will need to be made purely based on her resourefulness and an inbuilt instinct to survive. Her outward fragility and beauty, hides a stubborn and brave heart, steadfast in her mission to help provide for her family and community. However her naivety, impulsiveness and genuine innocence in the ways of love, are endearing not only to those who have come to care for her, but may also be manipulated and used against her, by those who might wish her harm. Hope is very sharp witted and astute, particularly when George and his family call into question her chosen way to support her own destitute and desperate family. She is quick to point out that for all their posturing and pomposity, the two cultures are not really so dissimilar in their moral values. In fact she would propound that her morals may be even higher than those of the Huntley dynasty, as she only takes what she needs to survive and put food on the table, whilst her wealthy benefactors accept the smuggled goods into their home as their due right, to smoke, drink and adorn their clothing, as well as offering them as tokens of hospitality to their neighbours and friends.

So we have two people each blinded in their own way by their preconceived ideas of right and wrong, with unfortunately, each of them on different sides of the law, although both of them seen as turncoats by their respective societies. There is a comforting sense of knowing that George and Hope’s growing love and affection for one another, isn’t going to be a torrid, all consuming affair, but a slow burning and enduring relationship, with each of them learning to respect and give strength, each to the other, in their daily lives. After much soul searching, both of them have made sacrifices and compromised their respective belief cultures, however this has only made them stronger and more united, determined to face the world together, standing shoulder to shoulder with Jack and Eulogy,  as shining examples of true love conquering adversity and prejudice.

If you like your historical romance, dangerous and daring, stubborn and sultry, enduring and everlasting, then this has to be a must for your reading list.

I am eagerly awaiting the release of the third book in the ‘Huntley’ trilogy,  ‘Verity’s Lies’.