Into The Woods
by David Mark
Blog Tour
Review

Thanks to the lovely Jade, representing publisher, Aries & Aria Fiction, for allocating me a space on this Blog Tour

Thanks as ever, to the great NetGalley team, for the easy download facility 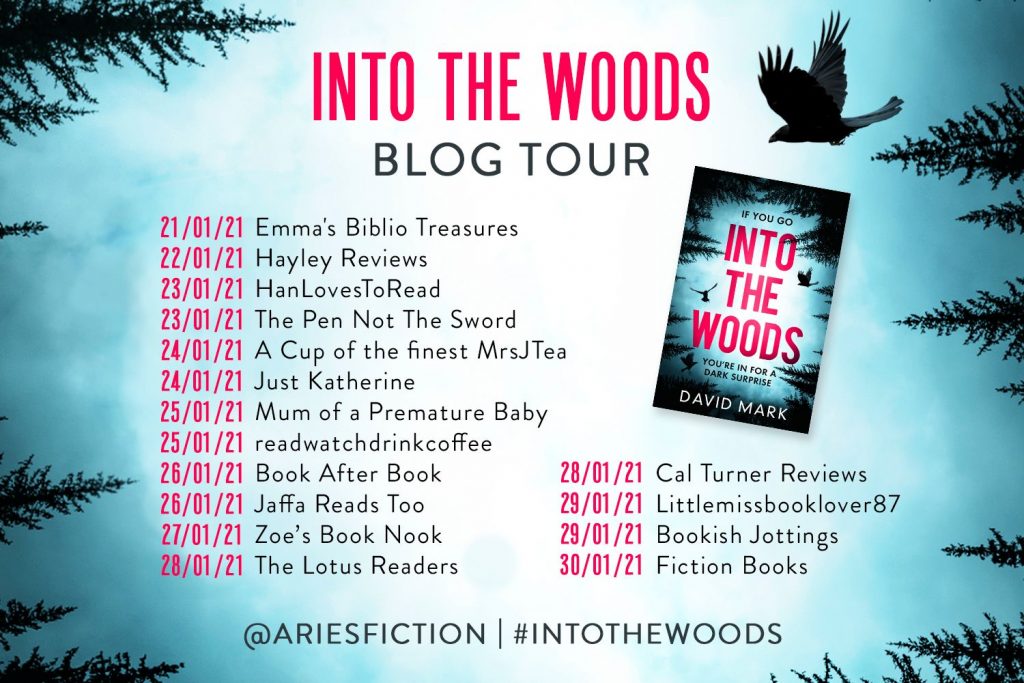 INTO THE WOODS (Lakeland Trilogy #1) 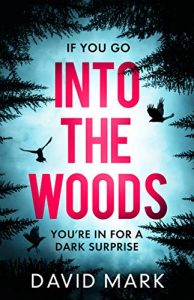 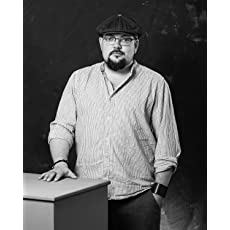 David spent more than 15 years as a journalist, including seven years as a crime reporter with The Yorkshire Post – walking the Hull streets that would later become the setting for the internationally bestselling Detective Sergeant Aector McAvoy novels.

His writing is heavily influenced by the court cases he covered: the defeatist and jaded police officers; the inertia of the justice system and the sheer raw grief of those touched by savagery and tragedy.

David’s Radio 4 drama, A Marriage of Inconvenience, aired last year. His first novel is currently being adapted for the stage. He has also written for the stage and has contributed articles and reviews to several national and international publications. He is a regular performer at literary festivals and is a sought-after public speaker. He also teaches creative writing.

Keep up with all David’s latest news at his Website

“The girl is beginning to return. She takes possession of her own unconscious skin as if wriggling into a wetsuit. Graceless, she slithers her way into fleshy cul-de-sacs and dead ends. She comes to life as if somebody were blowing air into a deflated rubber doll. She can’t work out where her arms and legs should go. Can’t decipher up from down. Can’t remember how to breathe”

“The morning mist gives this landscape a blurry quality, as if the watcher’s eye were still muzzy with sleep. It transforms the panorama into something oddly fabric in texture: the fells gathered into ruches and pleats; all mismatched swatches of tweed and hessian – felted twists and wisps of downy green wool.

A little cottage stands at the foot of the slumbering fell, half lost in the damp, grey air. It has a red chimney and a new roof of green slate. The two sash windows are big inquisitive eyes above the astonished mouth of the black lacquered door. It has been built of the same grey stone as the low wall that encircles it. A sign hangs above the doorframe: white letters on black wood”

“Violet looks at the small, shy girl, and hopes that she gets to become her friend. Hopes, too, that she doesn’t spoil it. Hopes she doesn’t make her usual mistakes. Sometimes she loves so fiercely that it looks a lot like hate”

“If he were writing about this tiny triangle of South-West Lake District, Rowan would use the phrase “sleepy” or “picture-postcard” – rummaging around in the crumbs at the bottom of his bag of journalistic cliches for the simplest way to get the right picture into a reader’s head. In truth, this little straggle of cottages and barns is well past sleepy. It’s asleep to the point of coma. If it had nostrils, Rowan would be tempted to use a mirror to check for breath”

“She glares at the newcomers with eyes that make Rowan think of the cheap nylon bears won at the fair. Her mouth is a glossy smear of red jam and the corners dip further down in tandem with each noticeable augmenting of her nostrils. Her gimlet gaze sweeps left and the nostrils flare like an exhausted horse”

“You’re in for a dark surprise”

Dark Surprise! That doesn’t even begin to describe what’s going on in this small corner of The Lake District and beyond!

Getting my thought processes into logic mode was quite difficult for this book, so you do need to read my review in its entirety, as my emotions and thoughts were so mixed.

There was a good strong beginning to this deeply disturbing book, and a rather satisfying and hopeful conclusion. However whilst the unique storyline definitely sucked me in completely, messed with my head until I had no idea which day of the week it was, then spat me out and left me to get on with picking up the broken pieces of my mind and senses, I felt that I wasn’t able to engage with it in the way I had hoped for, and anticipated. However that was totally my problem, as the plot was just so dark and twisted, as to be delving into the realms of horror/fantasy/ supernatural on occasion, making one or two scenes quite difficult to connect with, for me personally. I actually felt a little cheated that it didn’t quite achieve its full potential for me, as if it had, then I believe that the bits of me it had already left for broken, would have been totally destroyed to the point of being irreparable, such was the power and quality of the narrative and dialogue. For me personally, I think that some of the problem rested with the rather lengthy chapter headings, which left me slightly unsure and confused about where I was in the timeline at any given moment, thus making the storyline rather disjointed and not as fluid as I would have liked.

The author’s totally immersive and highly visually descriptive narrative has a terrific sense of location, which had me mesmerised, as I became drawn into this forbidding landscape, although I’m not sure that as an ‘armchair traveller’, David’s honest observations really endeared me to the area, and they certainly wouldn’t have been included in any reputable travel brochure! However they set the scene for this story, in an unimaginably powerful and atmospheric way.

This unconventional, multi-layered, intensely disquieting storyline, evoked and stirred so many emotions, all of which kept me on the edge of my seat the entire time I was reading. So adroitly was I manipulated, that at times I found myself becoming unfathomably angry by certain turns of events, causing me to have to pause and remind myself that this was a work of fiction, although oftentimes fact is indeed stranger than fiction! Is this display of drink and drug fuelled, ritualistic and menacing depravity, really so far removed from the reality of 20th/21st Century life as we think we know it, albeit that we strive to hide our perverted mores and proclivities; or is there simply a sickening reality in this chain of corruption and denial amongst authority? This is definitely not a story to relax and escape into, as the rich atmosphere which David weaves around events, is not conducive to putting the reader at ease in any way, although it is far too compelling and gripping to let it slip through your fingers and close the pages on it. This is most definitely not a journey to be rushed through, but is one which needs time taken to savour all the nuances and I felt as though I was right at the heart of the action, albeit that the dots didn’t always quite join up.

David introduced me to an equally unconventional multi-faceted cast of characters, to whom applying the epithet ‘quirky’, doesn’t even begin to scratch the surface. I was up close and personal with some of the strangest, most dysfunctional and often downright frightening individuals I am ever going to meet between the pages of a book. In fact they are a group which I would be running to get away from under any normal circumstances, although the story really would be nothing without them! They were drawn and defined with great complexity, then brought to life with complete confidence and total authority by an author who can obviously visualise and hear them all in full and glorious 3D, long before he commits pen to paper. This seems to be the community which time forgot, as this disparate and eclectic mix of bohemian, hippy and ‘otherworldly’ figures, trance their way through an existence which is far removed from contemporary normality. None of them are easy to connect with or invest in, with character dynamics and synergy, or coherent and intelligent conversational dialogue, being almost non-existent. Nonetheless, David has managed to really get under the skin of his cast and give them an unconventional form of life, giving them a physical appearance which you only have to shut your eyes to visualise and some ‘off the wall’ dialogue imbued with just the right level of unintentional wit and sarcasm, so as to make them stand out from the crowd, from time to time. The most forthright of the characters, is definitely disgraced journalist and would be author, Rowan. Alcohol, drugs and some ‘necessary’ violent and unscrupulous dealings, which have gone badly wrong, have seen him fall on hard times and his cynicism is clearly on display for all to see, as he is determined to make a story out of what he thinks is nothing, in order to fulfil his obligations and pay his debts.

As the author previously spent some fifteen years in journalism, many of those as a crime reporter, before wielding his pen in an entirely new direction, to forge a path for himself in fictional crime writing, he is clearly operating in an area which he knows all too well first-hand. But there is where I hope the similarities between himself and the dour Rowan end!

In my opinion, it is certainly a real understatement to say that this book might take each reader on a totally unique and individual journey, as it is more or less definitely guaranteed to do that!!