A frequent Mystery Writers of America “Edgar” nominee in both fiction and non-fiction categories, Max has earned an unprecedented number of Private Eye Writers of America “Shamus” nominations, winning for his Nathan Heller novels, True Detective (1983) and Stolen Away (1991) and receiving the PWA life achievement award, the Eye, in 2007.

His graphic novel Road to Perdition (1998) is the basis of the Academy Award-winning 2002 film starring Tom Hanks, Paul Newman and Daniel Craig, directed by Sam Mendes.
Max’s movie novels include Saving Private Ryan, Air Force One, and American Gangster, whilst as an independent filmmaker in the midwest, he has written and directed five features and two documentaries.

His many comics credits include CSI: Crime Scene Investigation, based on the hit TV series, for which he has also written video games, jigsaw puzzles, and ten novels that have sold millions of copies worldwide.

Max’s hit one-man show, Eliot Ness: An Untouchable Life, was nominated for an Edgar for Best Play of 2004 by the Mystery Writers of America; whilst his many other credits include. film criticism, short fiction, songwriting, trading-card sets, and a regular column in Asian Cult Cinema magazine.

His non-fiction work has received many honors, whilst as a musician (lead singer and keyboard), he has performed and recorded with his band Crusin’ since 1974.
Max, who also writes as Patrick Culhane, lives in Muscatine, Iowa, with his wife, writer Barbara Collins. They have collaborated on several novels and numerous short stories, and are currently writing the successful “Trash ‘n’ Treasures” mysteries. Their son Nathan translates Japanese into English with a number of novels and video games among his credits.

Check out all the latest news at Max’s website

“The two girls would be there, of this much you are certain.

Two women, actually – “girls” ten years ago, but women now. Judging by their photos on Facebook, both are still quite lovely. Neither is married, interestingly. Well, married to their careers maybe.

And if they both attend – and social media chatter assures you they will – and see you, and start talking … what could you do? Stay home, you suppose. But even in your absence they might talk. And if they talk, and that talk spreads, what would become of your career?”

“You are not anxious to do this.

Well, that’s not exactly right. You are anxious, in the sense that anxiety is a low fluctuating hum beneath your surface calm. You are prepared to do this only to protect yourself. You really have no wish to hurt her. The memories with this one are too fresh. Too sweet. Too vivid.

But you will probably have to do it.”

“It’s never too late for revenge”

From what appears to be a slightly different approach to the author’s usual style of writing, this was a well constructed, thoughtfully researched, police procedural / murder mystery, which packed a punch in the scenes when it needed to ratchet up the tension, throwing in just enough red herrings to maintain the intrigue and kept me guessing right to the end – and, I have to admit, still quite a way from me getting it right!

The core plot was very relevant and on trend with current news features, highlighting with great clarity and insight, the enormous and potentially personal risks which whistleblowers are prepared to take, to ‘out’ their personal nemeses, often with disastrous consequences for themselves and others. Although it is a debatable point as to whether there would have been anyone stepping up to point the finger, if the murderer hadn’t panicked about the concept of a reunion and pre-empted a hypothetical situation – who knows!

Whilst I was happy that Krista was keeping her head above water during the investigation, I wasn’t completely comfortable with her role as Chief of Police, feeling that she wasn’t quite strong enough in personality, or experienced and confident enough in her new position to achieve her full potential. I am hoping that her role will grow in stature and independence as the series progresses and that Keith will take slightly more of back seat, perhaps as more of an advisor than a partner, although they do play off one another well, so there is no way the partnership should be ended completely, anytime soon.

I don’t think that Krista’s first major investigation was helped by the fact that the victims, just about all the suspects and indeed, the murderer, were known to her personally, and had been since childhood. Also, as the investigation unfolded, it became clear that Krista herself was involved in the complex events of the past, which had helped to bring about these current tragic developments.

Although she took great pains not to allow that to colour her judgement, to stay focused and professional, it took Keith’s experience and wisdom to start separating the wood from the trees, with the help of those few former friends and colleagues of the perpetrator, who realizing that something had been amiss for some time, were finally made to feel guilty enough to voice their doubts, even if it was only so that they were able to be eliminated as suspects themselves! I would have quite liked a little more detailed account of the accusers suspicions, although that didn’t really detract from the storyline, or the pace events moved at.

On the whole, Max managed to create quite a disparate bunch of suspects, none of which for me, were particularly likeable, which is probably what made the revelation of the actual perpetrator so difficult for me to work out. However, I did really like the idea that I got to ‘know’ the killer and a little of what they were thinking, as Max very cleverly had the book’s chapters switch back and forth between the first and third person, so that we read about the murders as they happened and from the killer’s point of view.

From a purely personal perspective, after a story so choc full of lavish descriptions, including the breath-taking end game, which might have benefitted from a little more time and attention to detail, I would have liked to have heard more about the killer’s motives for their original crimes, alongside them describing how they were committing their present day murders, an area which was left a little vague.  There were also one or two seemingly unrelated outside events which were thrown into the mix, mostly concerning Krista’s father, which were also left as rather ‘unfinished business’ – I wonder if this was a deliberate omission, so that they were left as possible tie-ins to any future storylines?

Following on from earlier posts about the book, where I indicated that Max planned to write a further story featuring the father / daughter team, which would be a prequel to Girl Most Likely, I am now pleased to announce that the next book will form part of an extended series, with the prequel being put on hold for a while.

A Twitter follower posed the question as to whether we ever read the acknowledgements at the end of a book, or if we closed the cover as soon as the story was done with?

Well! I have to admit that I rarely bother with the acknowledgement pages, unless I have a few more minutes reading time available, but not quite enough time to begin a new book.

However, this was one such occasion and I was pleased to discover that the City of Galena, Illinois, does in fact have a female Police Chief, who having worked her way up through the ranks, was more than amenable to answering Max’s questions about the local area and policing procedure, adding credence to the storyline and illustrating the research and attention to detail by the author.

I was even more pleased to have a few moments left to research a little about the City, which is named after a mineral mined in the area, was the home of Ulysses S. Grant and several other Civil War Generals and is today, a popular tourist destination in the region.

From preference, I do not agree with ‘rating’ a book, as the overall reading experience is so much a matter of personal taste, which will vary from reader to reader. However some review sites do require a rating value, so when posted to such a site, Girl Most Likely will attract a 4 out of 5 star rating. 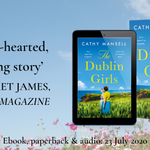 #London #Russia #France
From every place I visit, I bring back the sense/smells/images of them all so that I might make my books more evocative for my readers
@midaspr
@HoZ_Books

#TalkingLocationWith.. David Gilman, author of The Englishman set in London, Russia and France. My novel writing covers a broad canvas of locations b...