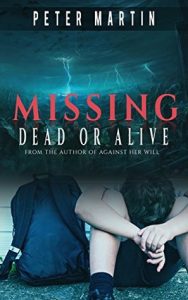 A police investigation reveals Tim wasn’t quite the son they thought he was.

Frantic attempts to find him fail, and when their quest becomes an obsession this causes problems between them.

But they never give up, and are determined to find him DEAD OR ALIVE.

Even though it may cost them dear. 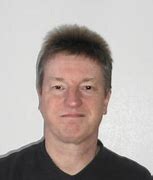 Peter Martin is the author pen name of Martin Perks.

Peter was born and bred in the West Midlands.

His interests lie mainly in crime, suspense and thrillers.

“Maria Shepherd sat at the breakfast table, sipping tea from a blue and white patterned mug. She was waiting for her son Tim to get up, having called him ten minutes ago. It was now seven-thirty am. Tim usually liked to get up early as he enjoyed going to school. Surely he wouldn’t want to be late”

“She was glad of his presence, but later that night when they finally went to bed she got little sleep. The feeling of dread remained with her each time her eyes opened. It was hard to imagine a time when life would get back to normal and she’d find peace of mind again”

“This is my shrine to him, from now until he comes back to us”

“He always ended up with the same answer: he couldn’t live with a liar and a cheat”

“But don’t expect miracles, and you won’t be disappointed”

“Will there still be a chance for new beginnings?”

First off, I should say that I really enjoyed this psychological thriller. It had a strong beginning which really set the scene; a good storyline which might have been a little too detailed for some, but which I liked for its descriptive narrative and dialogue; and an ending which held some hope and promise for a better future, but only given time!

This must be the scenario every parent dreads the most. Your teenage child goes missing with no word or trace, leaving you helpless, lost and bereft. But that’s only the outer layer in this multi-faceted storyline, which is well constructed, slowly evolving and very compelling. Peel back the layers of this middle-class suburban family and it doesn’t take long before reality takes hold, the stress cracks begin to show, and eventually life as Bob and Maria know it has crumbled away and is lost forever.

Very character driven, the first half of the book deals exclusively with Tim’s sudden disappearance and Bob and Maria’s desperate search for answers as to why. The story evolves slowly and deliberately, taking in all the nuances of the emotional angst and distress this potentially life-changing event brings with it. Two lives put on hold, a marriage fractured and broken by the continual disappointments of false sightings and the longing for answers to all to all those endless ‘why’ questions. The seemingly endless tunnel of despair, with no light at the end. No arms to hold and comfort during those long dark days and nights, as the couple grow ever further apart. The unspoken guilt and blame of things left unsaid and actions never taken. The eventual realisation that somehow life has to go on, but not really wanting it to. The reality of togetherness, yet feeling so alone and abandoned. No fast-paced action, just a slow dawning that their son has gone from, or been taken from them and that if and when he chooses, or is able to find his way back home to them, it will be at a time of his own choosing – or maybe never at all!

Almost every thought and word from those days, weeks and months after Tim’s disappearance is recorded in detail and I enjoyed the slow unravelling of this relationship and the ensuing aftermath of devastation, guilt, anger and recrimination. However, as visually descriptive and observational as it was, I did find the style of narrative and dialogue quite ‘clunky’ and perhaps a little formulaic. I would have liked a little more fluidity and smooth flowing passion, at  what would have been a very emotional time for everyone. I tried to take myself back in time to 2011, when this book was first published, however on careful reflection, I still also felt that a little more in depth research about police procedures in the early days after a child is reported missing, might have made events a little more credible.

The second half of the book really ramps up the pace of the plot building and events begin to take a very disturbing and sinister turn. Peter ratchets up the air of suspense and tension quite nicely and although I worked out where things were eventually leading, there were plenty of twists and turns along the way. It seems as though everyone is out to get Bob and Maria one way or another and the plots and schemes flow thick and fast, although in all fairness neither of them are really much good at helping themselves out of a situation.  Will the dread and menace in these sudden turns of events draw them together, or push them ever further apart. Or is there even going to be a future for either of them? Author Peter Martin has very specifically not included any ‘spoilers’ in that concise premise, so I’ll leave it for you to discover for yourself!

Peter did amass a good cast of characters, who kept true to their roles right to the end. They were well defined and developed, although none of them were easy to connect with or invest in. They were all rather shallow, selfish and self-centred, emotionally weak and complex, and almost masters of their own demise, making this on the whole, an entire cast I really loved to hate, exactly as Peter had intended I’m sure.

The writing style and technique of delivery may not always have been to my personal taste, however I am not here to critique the author, so for personal enjoyment, intrigue and the ‘edge of the seat’ ending, it is a definite 4 stars!

A download of this book for review purposes, was kindly gifted to me by the author, with fulfilment by Amazon for Kindle