‘Mothers And Daughters’ By Leah Fleming

Crete, present day. A woman anxiously awaits the arrival of someone who could change her life for ever…

Lancashire, the 1950s. Three young girls make their way in a brave new post-war world. But can they escape the trappings of the past?

Bookworm Connie dreams of university. Brought up on myths about her mysterious father, her life is turned upside down when she accidentally discovers the truth about him.

Former ugly duckling Joy is determined to snare a man now she’s finally a swan. Winning the “Miss Mercury” competition she bowls over local heart-throb Denny Gregson. But she quickly finds he’s not all he seems…

Convent-educated Rosa is a born rebel, desperate to flee the strict nuns for a life on the stage. But sometimes you need to be careful what you wish for…

.
As all three girls face heartbreak and tragedy, can they learn from the mistakes of their mothers? Or will history repeat itself?

Check out those all important ‘First Lines’, here … 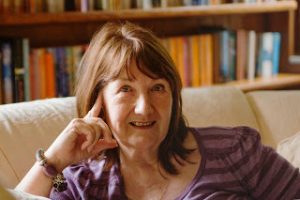 After University, her first career was in teaching, with sunsequent jobs including: catering from a market stall and delivering stress management courses and counselling inside the NHS. It was only after moving to the beautiful Yorkshire Dales, with her husband and four children, that Leah finally found her true calling, as a storyteller.
.
She was short listed for the Romantic Novel of the Year in 1998 and for The People’s Choice Pure Passion Award 2010 for Remembrance Day.
.
Her epic tales cover centuries and many generations with a strong sense of place and time. The Captain’s Daughter, a Titanic drama won the 2012 Premio Roma Award for Translated Fiction. The Girl Under The Olive Tree has been translated into at least 4 languages.
.
Leah continues to live for much of the time in the beautiful Yorkshire Dales, but spends part of the year working on her next storyline, from an olive grove, on her favourite Greek island of Crete.
.
To write well you have to punch above your weight, reading authors far more skilled than you will ever be. Quality will out and I hope by osmosis some of it will seep through into my own prose. If I ever stop reading for pleasure, escape or instruction, that will be the time to quit writing too.
.
Catch up with all Leah’s latest news at her website
Follow Leah on Twitter
Connect with Leah on Facebook
…
MY THOUGHTS ABOUT ‘MOTHERS AND DAUGHTERS
“Best friends, worst enemies and a bond that can never be broken…”
.
This story was originally attached to Leah’s first ‘Grimbleton’ novel: War Widows  as part of the later history of the Winstanley family in the 1950s and 60s. Then as tales often do, it took on a life of its own and can now be read as a stand- alone novel, with previous characters and relationships being easy to assimilate into the storyline, enabling me to share their various ups and downs with genuine empathy and understanding.
.
Mothers and Daughters, is in essence, an emotionally charged tale of the special relationships which exist between mothers and daughters. Leah has written the story sympathetically, with a keen sensitivity to family dynamics, whilst in no way diminishing the truth of what life was like for women in the 1950s and 60s, especially for those who were single and who chose not to, or refused to, conform to the perceived ‘norms’ of a post-war English society.
.
The dialogue is well balanced, unbiased and completely realistic, bringing to life a series of strong and complex female characters, entwining the stories of three girls in the fifties and the impact that events in their respective mother’s lives have on their own.
.
This beautifully-crafted, poignant and heart-warming story, conveys so exactly the typical families reaction to the three girls individual circumstances, despite it being the free and open society of the ‘swinging’ 1960’s.
.
Teenagers sought, and were given, much more freedom from convention, but that freer and more unconventional society, was still completely unforgiving and inflexible when personal mistakes were made. Family good name and reputation were all important, and so many young mothers were forced into making ‘the right decision’, but for who?
.
In this saga, the young people had already seen their own parents forgiven for similar transgressions, as understandable war-time mistakes. They therefore thought that such understanding would be forthcoming to them, but the elders closed ranks around them, with a ‘do as I say and not as I do’ attitude and it would be some time before acceptance was gained, but at what cost and would it be too late?
.
Whilst the girls’ mothers were facing their own similar dilemma; should they open up and share their experiences and gained wisdom, thus helping their children not to make the same mistakes, or should they keep their own  counsel and let their daughters forge their own destinies.
.
Definitely a woman’s story about the search for happiness in a changing world.