I would like to thank the lovely team at TripFiction for selecting me as the winner of a competition, where the prize was a lovely hardcover edition of this book.

In these days of e-books and PDFs, you can’t beat the sound of that good solid thump, as ‘the real thing’ lands on the doormat.

Oh! the look, smell and feel of those printed pages, there surely is nothing like it! 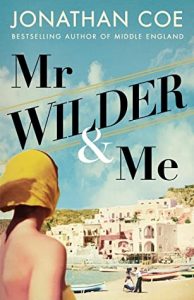 In the heady summer of 1977, a naive young woman called Calista sets out from Athens to venture into the wider world.

On a Greek island that has been turned into a film set, she finds herself working for the famed Hollywood director Billy Wilder, about whom she knows almost nothing. But the time she spends in this glamorous, unfamiliar new life will change her for good.

While Calista is thrilled with her new adventure, Wilder himself is living with the realization that his star may be on the wane. Rebuffed by Hollywood, he has financed his new film with German money, and when Calista follows him to Munich for the shooting of further scenes, she finds herself joining him on a journey of memory into the dark heart of his family history.

In a novel that is at once a tender coming-of-age story and an intimate portrait of one of cinema’s most intriguing figures, Jonathan Coe turns his gaze on the nature of time and fame, of family and the treacherous lure of nostalgia. When the world is catapulting towards change, do you hold on for dear life or decide it’s time to let go? 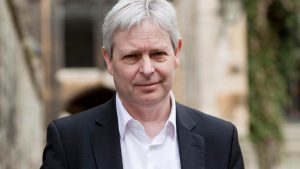 Jonathan Coe was born in 1961 in Lickey, a suburb of south-west Birmingham. His first surviving story, a detective thriller called The Castle of Mystery, was written at the age of eight.

He continued writing fiction throughout his schooldays, his three years at Trinity College, Cambridge and his postgraduate years at Warwick University, where he was awarded a doctorate for his thesis on Henry Fielding’s Tom Jones. While working on this thesis he also completed The Accidental Woman, the first of his novels to be published.

In the late 1980s he moved to London to pursue his literary and musical enthusiasms, writing songs for his short-lived band “The Peer Group” and a feminist cabaret group called “Wanda and the Willy Warmers”. The Accidental Woman was published in April, 1987, and was followed by A Touch of Love (1989) and The Dwarves of Death (1990), but it was not until the publication of his fourth novel, What a Carve Up! that he began to reach a wider audience. It became his first international success, with translations in sixteen languages.

His work has received many prizes and awards, including both Costa Novel of the Year and Prix du Livre Européen for Middle England.

In France he won the Prix Médicis for The House of Sleep and has been appointed Officier de l’ordre des arts et des lettres.

In Italy he has also won the Premio Flaiano (for Number 11) and the Premio Bauer-Ca’ Foscari.

The citation for the latter prize concluded that:-

‘for his keen interest in the most crucial issues of contemporary civilization, Jonathan Coe may be considered a complete novelist and a classic of our times’.

“One winter’s morning, seven years ago, I found myself on an escalator. It was one of the escalators that takes you up to street level from the Piccadilly Line platforms at Green Park station. If you’ve ever used one of those escalators, you will remember how long they are. It takes about a minute to ride from the bottom to the top and, for a naturally impatient woman like me, a minute standing still is too long”

“My daughter was right: young people do not notice the feelings of their parents, are not even aware that they have feelings, most of the time. They live in a blissful state of sociopathy, as far as their parents’ emotions are concerned”

“The gods would be moving on, in other words; and I, a mere mortal, would be left behind, forgotten”

“Billy might have known it for several months by now, and I might only just have begun to grasp it, but we had both come to the same realization: the realization that what we had to give, nobody really wanted any more”

“My poverty was always a source of disappointment to her. If only she could have waited a few years”

“As you get older, the hopes get smaller and the regrets get bigger. The challenge is to fight it. To stop the regrets from taking over”

“Whatever else it throws at you, life will always have pleasures to offer. And we should take them”

“When the world is catapulting towards change, do you hold on for dear life or decide it’s time to let go?”

This story is another delicious example of the blended fact and fiction novels, which are becoming so popular now, and this one is executed to perfection, by an author who is new to me.

No fast-paced action, in fact, no rushing whatsoever. No in-depth twisted storyline to unravel, or dark and hidden clues to fathom, no ‘bad guy’ to chase down. This is simply a story to luxuriate in, to savour every word and nuance, to get to know the characters, and to fully appreciate the quality of the well edited research and exquisite prose, which put me completely at ease and nicely relaxed. It seems that for almost everyone who has read and reviewed this book, the journey has been a unique and totally different experience to that of the next person, so opening that first page really needs to happen without any pre conceived ideas about the storyline, or expectations for an outcome. You simply need to enjoy the ride!

Narrated in a single voice, that of Calista herself, this is a story told in dual time frames, spanning several decades and finds her visiting many different countries, whilst enjoying various new, exciting and life-changing experiences. It is therefore even more astonishing to discover that in fact, the characters of Calista and her family are just about the only part of the storyline which is fictional, their backstory being seamlessly and artistically woven and blended with the many factual layers, into a complete and powerful package, which stands up well to scrutiny.

Compellingly written with total authority and confidence, the author is an artist with words, allowing the visually descriptive narrative and dialogue to transport me, a neutral observer, along on Calista’s adventures, with the sights, sounds and smells being oh! so close, yet tantalisingly out of reach! In this well constructed, multi-faceted storyline, there are many touching and emotional personal vignettes playing out simultaneously, with those parallel factual and fictional elements intertwined to enrich and add depth to the experience, as I glimpsed inside the rather fractured world of the rich and famous.

As Calista reminisces back to the heady days of the late 1970s, we essentially witness a rather morose and defeated Wilder, who together with his long time career associate, Diamond, realise and are trying to come to terms with, the prospect that the sands of time have rather caught up with, and indeed, overtaken them. This begs the question is Fedora, ostensibly a new film they are collaborating on, about a rather faded film star, really a personal homage to a director and writer, who once in the limelight, now find themselves retreating ever further into the shadows, with their rather dated style of film. Contrast that with the young Calista, whose stars are definitely in the ascent, as Wilder and Diamond take her under their collective wings and offer her an opening into their glamorous world. Calista seems to have the knack of bringing out the best in both men, with her innocent guile and charm. Gradually Wilder, an Austrian by birth, opens up to her about his highly emotional past and his constant striving to bring closure to the personal wartime events which have helped to shape him and his career. This vulnerability and desperate intensity, is laid bare for all to see and hear, during a post filming dinner at which all the crew are present, when his pain of a lifetime spent searching for a sense of belonging and answers, pours forth like a scripted speech from one of his own films.

Fast forward to the present day and in a bittersweet parallel, we find Calista struggling with her own ‘raison d’etre’, now that her family seems to have discovered their independence, her job as a full time mother is taking on a new background role and her career composing film scores has been confined to back burners of time. Can it be that she is able to manipulate and call upon that one final endgame, which will offer a lifeline to stave off her own personal lengthening shadows and approaching sands of time.

There are many background characters, who although they all have their part to play, don’t form an intrinsic part of the wider story. However, the principle characters are multi-faceted, well developed and defined, quite relatable and easy to invest in. Calista manages to connect with Wilder, Diamond and their wives with an innocence and naivety which is really surprising, drawing them out and forcing them to interact honestly with each other, in ways which they hadn’t done for some time. There is a vulnerability and emotional complexity about them which is both poignant and touching. Scratch the surface and there is a genuine depth and inclusivity. The scene between Wilder and Calista at the cheese farm, is definitely one to look out for

When I came to this story, I knew very little about the legend that is Billy Wilder and I was familiar with just a small handful of the many films he had made. To some extent this is simply a potted memoir of the man, however introducing the fictional character of Calista to the equation, has give the words an added dimension. The icing on the cake of this story, which rather reads like a film script itself, would be to see the book optioned for film in the future, thus completing that third dimension.

A complimentary hardcover edition of this book, was awarded as a competition win and made available by TripFiction

The Package
by Sebastian Fitzek
Review

Written by Yvonne
6 comments
Into The Woods
by David Mark
Blog Tour
Review
FacebookTwitter
Prove It: Murder In The Mix
by Hannah Kurz
Review