My thanks go out to the lovely Sarah, representing publisher, Bookouture, for finding space for me on this ‘Books On Tour’ spot. 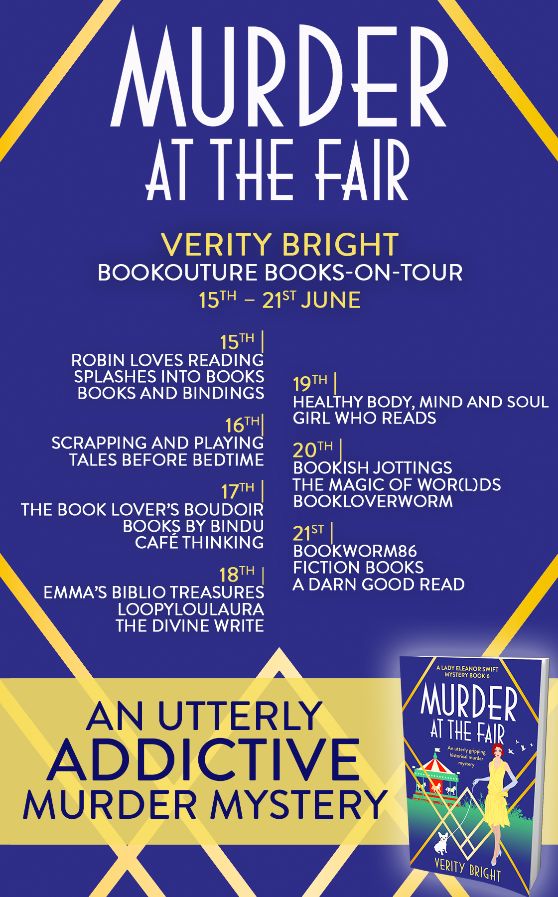 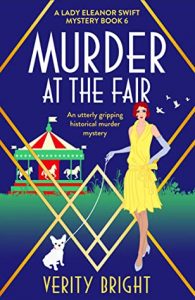 Summer flowers, warm sunshine, a maypole dance and… is that another murder? A tricky case is afoot for Lady Swift!

Summer, 1921. Lady Eleanor Swift, the best amateur sleuth in the country, is delighted to be in charge of the prize-giving at her village summer fair. But the traditional homemade raft race takes a tragic turn when the local undertaker, Solemn Jon, turns up dead amongst the ducks. Jon was the life of any party and loved by the entire village. Surely this was simply an awful accident?

But when a spiteful obituary is printed in the local paper, Eleanor realises there may be more to Jon’s death than first thought. Despite handsome Detective Chief Inspector Seldon giving her strict instructions not to interfere, Eleanor owes it to Jon’s good name to root out the truth.

So with her partner in crime, Gladstone the bulldog, Eleanor starts digging for clues…

When another local dies in a riding accident, the police refuse to believe he was murdered. But a second vindictive death notice convinces Eleanor of foul play. Solemn Jon’s assistant, a bullish banker and a majestic marquess make her suspect list, but it isn’t until she finds a dusty old photograph that she knows the true culprit behind both crimes. Then another obituary appears – her own! Can Eleanor nail the killer before she too turns up dead among the ducks?

Her piercing green eyes scanned the immediate vicinity. Luck was on her side. The villagers of Little Buckford were too busy enjoying the warm spring sunshine and the May Fair to have noticed anything amiss.

‘Gladstone!’ Lady Eleanor Swift hissed at the bulldog hiding his head under the sage skirt of her favourite two-piece suit. ‘Whatever have you stolen now, you little terror?’ She gently pulled him out, smoothed her skirt down her long, slender frame and tucked one of several mutinous strands of red curls back under her cloche hat. She knew admonishing him was fruitless. He’d been far too loved and indulged by her late uncle – the dog’s previous owner – to ever take a reprimand to heart. Fourteen eventful months after she’d arrived at Henley Hall, she still had no real idea how to manage the bulldog or the estate, but had fallen in love with both”

“Clifford led her to the southern end of the green, where it seemed most of the village had assembled. She felt utterly at peace and very lucky. It was almost as though she was watching seven hundred years of history unfold before her in a single afternoon”

“When the man who buries the dead dies, Clifford, who is left to bury him?”

“Even though he was impossibly attractive, on the few occasions she’d met him, she’d found his charms most definitely ended at his appearance; his personality being a poor and ignorant second cousin”

“I tell you Eleanor, I’m glad it’s Brice who has him locked up as I fear my temper would beat my professionalism by a very long chalk, likely all the way to my fists!”

“A part of me knew evil only begets more evil”

“Always said we should celebrate a person’s life, not mourn their passing”

“A tricky case is afoot for Lady Swift!”

After reading Murder at the Fair, my second dip into this excellent Golden Age Murder Mystery series, I can safely say, move over ‘Jeeves and Wooster’ and make space for ‘Swift and Clifford’. I really do think this would make a wonderfully colourful BBC drama series, or at least a one off, made for television film.

There has been some excellent and detailed research undertaken by the authors, to ensure the authenticity of both the characters, setting and the social mores of the time. They have also included an interesting and comprehensive ‘historical facts’ section at the end of the book, which reflects some of the more quirky customs and colloquialisms you might encounter in your reading.

Whilst this episode is very much part of an ongoing series, the individual books do work rather well as stand alone stories. There is obviously a little backstory going on with some of the characters, however any need to know facts are expertly and seamlessly woven into the narrative and dialogue, so that I never felt left out of any gossip or history. In fact this story seemed to give away some lovely extra little snippets of information that hadn’t been revealed in previous books, so everything is kept fresh and relevant.

The story hit the ground running right from the time I opened the first page; the action was continuous throughout which left me little time to draw breath and take stock of the situation as it unfolded and developed; culminating in an ending which was neatly packaged and never rushed; although that extra fourth criteria for keeping me turning the pages, that the main protagonist should always make it out alive, seems to be getting a closer call each time!

This well structured, multi-faceted, traditional mystery, is beautifully textured and puts the reader right at ease.  The authors wrote with total authority, consummate ease, complete confidence and some lovely heart and humour moments, as they led me completely in the direction of their choosing and at a pace of their setting, and all without me even noticing.

Once Eleanor had really got the bit between her teeth and begun work on this case in earnest, the suspects began to multiply exponentially, until even she needed to take a break, re-evaluate the situation and work her way through things methodically, which is where the ever steadfast and calming influence of her loyal butler and partner in crime busting, Clifford, once again came into its own. As it transpires, no one suspect was guilty of all the crimes, although the many twists and turns in the tale needed to be unravelled before that became clear. Lies and deception, guilty little secrets, jealousy and revenge, all mean different things to so many vindictive people with an axe to grind and retribution on their minds. Needless to say, I never got close to working this one out and that final devastating and unexpected blow, dealt right at the eleventh hour, was vindication come too late for some, whilst also being something of a cloud with the proverbial silver lining for someone I had been rooting for all the way along.

The chapters were nice and short and well signposted, which kept the action fluid and current. This together with well assured, observational and period descriptive narrative and some excellent, conversational, cultural dialogue, offered a genuine sense of time and place, which made this a particularly enjoyable journey for me.

The authors have gone to great lengths to ensure that the well drawn and highly engaging and relatable characters, all have a voice of their own, making this their own story for their times. After being rather thrust into the role of Lady of the Manor, following the death of her uncle, Eleanor had been used to a much more bohemian upbringing in South Africa, so adapting to her new position is proving to be quite a challenge. She is very much a person ahead of her times, who whilst recognising that her staff do work for her, would much rather they work with her, towards the common goal of keeping the estate in good  standing as a tribute to Uncle Byron. She is generous with both her time and money, always putting others before herself and in all fairness, even the rather dyed-in-the-wool Clifford, enjoys more moments of levity, impropriety and equality at Eleanor’s side, than he would ever have envisaged.

Eleanor’s affairs of the heart also seem to be on the up, with DCI Hugh Seldon, after a few false starts and having a veritable bombshell dropped on her about his past. Now all Hugh needs to do is work out how to stop Eleanor almost getting herself killed every time she decides to try and solve a crime for herself and all should be good, as I think he has already come to the conclusion that he is never really going to tame her into becoming ‘the little woman at home’!

As with so many fictional amateur sleuths, Eleanor has also been bequeathed ownership of and responsibility for, a four-legged canine partner, who in this particular case, very much thinks he rules the roost, without having to work too hard for it. In fact the only time he really stirs himself from his dozing and napping, is when he gets the scent or sight of food, no matter what it might be, and then he is suddenly all action!

No matter which genre I read from, I do so to fulfil the four ‘E’s’: Enjoyment, Entertainment, Escapism and Emotion and this lovely series hits the sweet spot on all fronts and is definitely one to escape into!