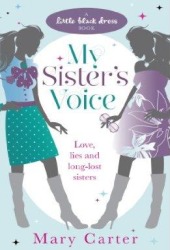 What do you do when you discover your whole life was a lie?

At twenty-eight, Lacey Gears is exactly where she wants to be.  An up-and-coming, proudly Deaf artist in Philadelphia, she’s in a relationship with a wonderful man and rarely thinks about her difficult childhood in a home for disabled orphans.

That is, until Lacey receives a letter that begins, “You have a sister. A twin to be exact…” Learning her identical, hearing twin, Monica, experienced the normal childhood she was denied resurrects all of Lacey’s grief, and she angrily sets out to find Monica and her biological parents.

But the truth about Monica’s life, their brief shared past, and the reason for the twins’ separation is far from simple.  And for every one of Lacey’s questions that’s answered, others are raised, more baffling and profound.

Complex, moving, and beautifully told, My Sister’s Voice is a novel about sisterhood, love of every shape, and the stories we cling to until real life comes crashing in…

Check out those all important first lines, here

Teaser lines to tempt you a little more, here 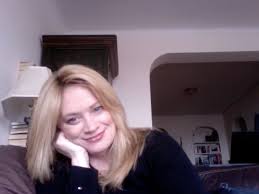 Mary Carter, is a graduate of both the American Academy of Dramatic Arts and the National Technical Institute for the Deaf, both of which are part of the RIT (Rochester Institute of Technology).

She successfully earned a degree in sign language interpreting, initially spurred on by the fact that a cousin and his wife were Deaf and then for fun after becoming frustrated that the little sign language she had learnt as a child was not comprehensive enough to be able to carry on a normal conversation.

Mary is now a full time novelist and workshop leader at The Writers Loft in Chicago.

Catch up with all Mary’s latest news at her website

“Learn to tell what your story is about in one sentence. Narrow your focus. Stories have to be about something”

“I am Deaf. Not Impaired. Impaired implies something is broken and needs to be fixed. I am not broken. I do not need to be fixed.”

“She corrected his conception that sign language was universal, telling him that every country had its own sign language. She told him she was Deaf with a capital D, which signified a specific group of Deaf individuals, those who used American Sign Language”

“Hearing people really don’t understand. It still comes down to the fact that we’re happy being Deaf and would celebrate having a Deaf child, but hearing people think deep down we still want to be fixed, we want to be like them”

‘What do you do when you discover your whole life was a lie?’

Mary Carter has placed the reader right at the heart of an intense, cleverly crafted, moving and emotional storyline, replete with plenty of twists and turns.

She has created believable, well developed, inspiring characters, who absorb you into their lives, with their complex personal challenges, that made me smile and feel a little sad, both at the same time.

Lacey’s reactions often appeared quite extreme and ‘off the wall’, but in retrospect were completely understandable and genuinely spontaneous.  Initial disbelief, excitement and joy, quickly turns to scepticism, shock and hurt, as the reality of the situation sinks in.

Her first thoughts and hopes of getting to know Monica and building a relationship with her, are quickly dashed when feelings of jealousy, self pity and loathing leave her feeling vulnerable and insecure.

Lacey finds herself unable to share either the material things in her life, or her mixed and jumbled emotions and feelings, with a sister whom she feels has taken her share of their parents love and attention. The need to retaliate and seek retribution for what she sees as the lost years of a family life, becomes overwhelming and she demands that Monica makes the supreme sacrifice, as some form of appeasement and catharsis.

Mary’s words paint a vivid image which is almost the complete antithesis of what I was expecting. Lacey comes across as the charismatic and fiercely independent one of the sisters, whilst Monica is the clingy and reliant twin, never quite sure enough of herself, to take that leap of faith into the unknown. It really made me wonder just which one of the girls had been left most damaged by past events!

The true facts of  the situation surrounding Lacey’s childhood, the total destructiveness of long buried family secrets and the girls ultimate separation, pile in one after the other, until they are both forced to face up to the unpalatable truth, when they must decide whether they are able to rise to the challenge of rebuilding their lives, or stay forever bitter, angry and estranged.

The whole story is emotionally charged, with several difficult and challenging issues being put forward for debate and the attention to detail is there, in all the right places. I felt myself becoming completely immersed in the girls lives and wondering whether I felt sorry for, or angry with the extended list of characters, who seem to bring such influence to bear on what is already a difficult, complex and stressful situation.

The fact that the author is a qualified and certified sign language interpreter, means that she is eminently able to offer the reader an intimate insight into the Deaf community. This she achieves with a skill that does not labour the point, but which gets the message out there, through the character of Lacey, that Deaf people are proud to be that way and do not require pity, just the chance to live as equals in a hearing community.

I really came at this book with no preconceived ideas about the storyline but having read several reviews about it, and  come away with some very mixed messages, mostly from readers worried about the content and quality of the ending.

Yes, there may have been room for some slight improvement in the length and interpretation of the final few scenes, in comparison to the in depth analysis of the earlier conversations and confrontations, although to be honest Mary could have gone on for ever, only to end up by intoducing another whole new set of questions which needed explanations and answers. I had already vaguely worked out the final twist in the plot, so was quite happy with the wrap-up pages, feeling that the quality and dedication in the writing did not diminish to any great degree.

Overall ‘My Sister’s Voice’, was an insightful, moving story, which I would not hesitate to recommend.

This book was a ‘Kindle share’ purchase by my mother-in-law, just one of the two hundred plus odd books that I have discovered in my ‘Kindle archive’, enough reading to keep me going for a while then!