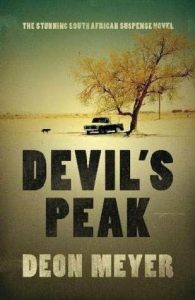 From rising South African thriller writer Deon Meyer, a gripping suspense novel about revenge, forgiveness, and the race to catch a trained killer.

A young woman makes a terrible confession to a priest. An honorable man takes his own revenge for an unspeakable tragedy. An aging inspector tries to get himself sober while taking on the most difficult case of his career. From this beginning, Deon Meyer weaves a story of astonishing complexity and suspense, as Inspector Benny Griessel faces off against a dangerous vigilante who has everything on his side, including public sympathy.

A gruesome abuse case has hit the newsstands, and one man has taken it upon himself to stand up for the children of Cape Town.

When the accused is found stabbed through the heart by spear, it’s only the beginning of a string of bloody murders – and of a dangerous dilemma for detective Griessel. The detective is always just one step behind as someone slays the city’s killers. But the paths of Griessel and the avenger collide when a young prostitute lures them both into a dangerous plan – and the two find themselves with a heart-stopping problem that no system of justice could ever make right. 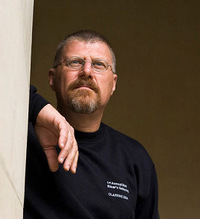 Deon Meyer is a South African crime fiction author and screenwriter. His books have been translated into more than 20 languages and are available worldwide.

He was born in Paarl in 1958 and matriculated in Klerksdorp in 1976. He studied at the Universities of Northwest, Free State and Stellenbosch, and holds a Masters’ Degree in Creative Writing.

Before turning to writing, Dean had very impressive careers as a former journalist, advertising copywriter, Internet manager and brand strategist.

Today, alongside his many books, he is also recognised as the author of  several television series and screenplays which have become full length films, even turning his hand to directing movies in his native Afrikaans.

He lives in Stellenbosch, and is passionate about South Africa, Mozart, mountain biking, cooking, photography, and Free State Cheetahs and Springbok rugby.

Keep up with all Deon’s news at his website

Devil’s Peak, is the first Deon Meyer book that I have come across, but is his fourth published novel.

This is not the book for you, if you have a total aversion to descriptive scenes of moderate violence, bad language and explicit sexual encounters. HOWEVER, if you give this book the chance, it becomes clear that everything is set in complete context to the storyline, with the scenes only adding to the overall richness of the dialogue and with none of the content being gratuitous in nature.

There are three separate strands to this complex story, with two of them obviously intertwined, right from the start. The third, seemingly unrelated element, a beautiful Afrikaans woman, who is confessing her part in events to a priest, throughout the course of the book, turns out to be the most pivotal character in the entire plot, although this doesn’t become apparent until well into the story.

I wasn’t quite sure just how successful the format for the book would be, as the story is constantly jumping from one character to another, but it worked surprisingly well and kept the tension going right to the end, with the ending itself being well thought out and a pleasant surprise.

An Afrikaans prostitute, an Afrikaans alcoholic policeman and a black South African avenging angel, make unlikely bed-fellows, but we discover that although ‘bush justice’ can be viewed in may ways; despite culture, history and language differences, when it comes to children, they all feel the same way.

Complex characters are well thought out and portrayed, with a hard-hitting storyline, encompassing police corruption, drug importation on a grand scale, and gang related violence and brutality.

Many may think, that because of the author’s nationality, this may be a novel illustrating the still complex and volatile situation, in an apartheid free South Africa. However, to me, although this may well be the case, the issues laid bare, could apply to any modern, multi-cultural city, anywhere in the civilized world.

Personally I rated this book very highly, for both it’s fast moving, graphic and intricate plotting; and it’s flawed yet absorbing characters, with their personalities laid graphically bare, so I felt that I was right there inside their heads thinking the same thoughts and feeling the same feelings.

An accomplished piece of writing, that made me keep wanting more, from an author whose work I shall continue to seek out in the future.

A portrait of human nature at it’s most truthful, perfectly illustrating “man’s inhumanity to man”.

Written by Yvonne
4 comments
The Hambledown Dream
by Dean Mayes
Review
FacebookTwitter
My Thoughts About — ‘Eyeshot’ by Lynn S. Hightower