‘Evil Under The Sun’ by Agatha Christie

CHECK OUT THE BOOK

The beautiful bronzed body of Arlena Stuart lay face down on the beach.

But strangely, there was no sun and Arlena was not sun-bathing… she had been strangled.

Ever since Arlena’s arrival the air had been thick with sexual tension.

Each of the guests had a motive to kill her, including Arlena’s new husband. 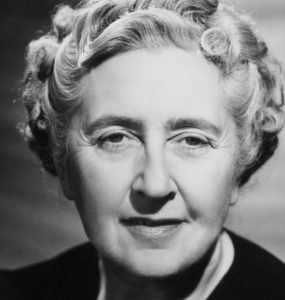 Agatha Christie is without doubt the world’s best-known mystery writer. Her books have sold over a billion copies in the English language and another billion in 44 foreign languages. She is the most widely published author of all time in any language, outsold only by the Bible and Shakespeare.
Her writing career spanned more than half a century, during which she wrote 80 novels and short story collections, as well as 14 plays, one of which, ‘The Mousetrap’, is the longest-running play in history. Two of the characters she created, the brilliant little Belgian Hercule Poirot and the irrepressible and relentless Miss Marple, went on to become world-famous detectives. Both have been widely dramatized in feature films and made-for-TV movies.

Agatha Christie also wrote romantic novels under the pseudonym Mary Westmacott. She also wrote four non-fiction books, including an autobiography and an entertaining account of the many expeditions she shared with her archaeologist husband, Sir Max Mallowan.

Plots come to me at such odd moments, when I am walking along the street, or examining a hat shop…suddenly a splendid idea comes into my head.

‘It is romantic, yes,’ agreed Hercule Poirot. ‘It is peaceful. The sun shines. The sea is blue. But you forget, Miss Brewster, there is evil everywhere under the sun.’

“There is evil everywhere under the sun”

From start to finish, this story was nothing more nor less, than I have come to expect from the pen of Agatha Christie, together with the deduction and crime solving expertise of the pernickety Belgian detective, Hercule Poirot, the product of her vivid imagination.

I find that Agatha Christie’s characters always carry a certain amount of predictability, which is quite comforting to know and almost look forward to, when I pick up one of her books that I have not read before. That is not to say that the characters are in any way not well developed and have grown in stature and confidence, to fill the role she has created for them.

The Christie plot building and storytelling skills are legendary, with every detail carefully thought through and catalogued. Written in the language of a bygone time, this complete package offers me, the reader, a totally immersive experience.

On this occasion, Piorot is taking a much needed holiday, but of course, wherever he travels, murder always seems to sniff him out and follow him.

The plot of ‘Evil Under The Sun’, is not particularly deep, although there are several twists and turns, in what I wrongly thought was a case to be quickly solved. I became embroiled in amateur witchcraft and drug smuggling, as well as the inevitable femme fatale, lured and deceived by the unscrupulous cad, with murder the only possible outcome.

Every one of the suspects has an alibi, that either seems to protect themselves, or someone else and I suspect that Poirot has worked out the probable identity of the killer long before he lets it be known, only prolonging the investigation further to confirm his suspicions, by watching the way that the suspects interact with one another and the manner in which his chosen perpetrator keeps up their own role of pretense, both within their own adopted personality and with the other group members.

As with most murders, there always has to be someone suspected of the crime, who turns out to be an innocent party, although in this case, the third party, really believes themselves to be guilty of the crime, thereby throwing Poirot slightly off the scent of the true killer, for a few short moments. Happily, this third party is made to realise that their actions are not those of a murderer and thus there is something of a happy ending in the offing for them.

If, like me, you are already an Agatha Christie fan, this is a great story, full of some real twists and turns in the plot, with the usual great, in depth characterizations of all the suspects, and the expected final flourish as the unexpected perpetrator is revealed.

Of course, I cannot read a Poirot case, without visualising the face and hearing the precise tones of the character, as so eloquently portrayed in the UK television series, by David Suchet. I fear that the poor man will be forever typecast, but he does fit the Christie brief of the character so well, that when I then read one of his casebook stories, it is almost as if  I know him personally and I am there, looking over his shoulder, as he makes his deductions and unmasks the criminal.

This book was a paperback edition, charity shop purchase. Any thoughts or comments are my own personal opinion and I am in no way being monetarily compensated for this, or any other article.