My Thoughts About … ‘His Chosen Bride’ by Sherry Gloag

‘HIS CHOSEN BRIDE’ by SHERRY GLOAG

Monica Latimer is not prepared to risk letting any man close enough to learn about her Gift. A gift that normally has men running for the hills when they find out about it.

FOCUS ON THE AUTHOR … SHERRY GLOAG

Sherry Gloag describes herself as a ‘displaced’ Scot, who, after spending her childhood in Scotland, now lives in the beautiful East Anglian countryside of Norfolk, where she is ideally placed for her hobbies of walking, gardening and craftwork.

Although she has always been an avid reader of romance, it was as recently as 2009 that she wrote her first stand-alone short story, (after the challenge was laid down by her husband, who had long known about her inner desire to write), with her debut novel ‘The Brat ‘, being published the following year.

If you want to know all there is to know and more, about Sherry, then there is a great and very in-depth interview with her, over on Morgen Bailey’s Writing Blog:

This contemporary suspense romance is the second novella in a series which will be known as:

My thoughts about the first book ‘From Now Until Forever’, can be read by clicking here.

‘CAN DUTY AND LOVE LIVE AS ONE?‘

This romantic suspense novella was gifted as a request for me to read and leave my comments about, by it’s author Sherry Gloag and as such was free of charge.

The emotional and gripping new historical fiction novel from @AndieNewton is #TheGirlFromVichy!

Out on August 13th, you can pre-order your copy today: 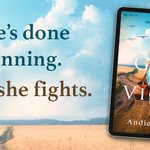