My Thoughts About …. ‘Skin Games’ by Adam Pepper

Lets find out something about the book:

When a mafia princess falls for a two-bit hoodlum an unhappy don plays some rough games in order to separate the two lovers.

Sean O’Donnell is a man who always keeps his word, especially to a lady.  His good-for-nothing old man left his mother flat.  When she gets ill, Sean assures her that he will never be like his father; if he makes a promise he will keep it, no matter what the cost.  When local mob boss Mario Torretta’s daughter Nicole falls for Sean, the Don is not pleased, and makes it known that Sean is not good enough for his princess.  However, Nicole is in love and begs Sean to stick by her.  Once Sean gives his word, no amount of pressure from the Don will weaken his resolve.  Sean will endure and persevere to keep his promise to Nicole, and to his mother.

Adam doesn’t seem to talk about himself an awful lot. His site ‘bio’ is remarkably impersonal, short and sweet, but I’ll give you the official potted version anyway:

I did come across this great reply to a question Adam was asked, in one of his rare interviews. I thought it was worthy of a permanent place in my rotating ‘Random Quotes’ side bar:

“I don’t consider myself strictly a horror author, but everything I do has a dark and cynical slant. That’s the worldview I bring to my fiction. I’ve always been attracted to bleak and gritty plots filled with disenchanted and alienated characters. I’m a fan of the underdog, of the underestimated and underappreciated. That’s just me.”

I also discovered this great ‘frank and friendly’ exchange which Adam had with Jim, across at ‘Ginger Nuts Of Horror’, in September 2011. You should really check it out if you have a few moments, it’s very interesting and informative.

It was truly a once in a lifetime moment. My father was proud of me. Visibly, noticeably proud.

The author of  ‘Skin Games: A crime drama’, Adam Pepper, describes the book as a crime/drama, yet, in my opinion, it is so much more. Yes there is crime and drama in spades, but there is no escaping Adam’s trademark acerbic wit and his propensity for indulging in the thrills and horror of a story, which had me on the edge of my seat all the while I was reading.

One small caveat … As you would expect from a story of this nature, there are a couple of sexual references, although these are not particularly graphic. There are also several acts of violence, which are described in reasonably graphic detail. All are completely within the context of the overall story and none are gratuitously added as an unnecessary enhancement to the plot.

The main focus of the book is Sean, (Shamrock), (Skin)’s absorbing and compelling personal story, which had me engrossed as I became more and more embroiled in his absorbing life. His character is complex and multi-dimensional. He has a strength and fierce loyalty well beyond his years, in his determination that he should never turn out to have inherited any of his fathers weak and wastrel traits. His word is his bond, no matter to whom he has made his pledge or promise. So firm is he in his beliefs, that I found myself almost ‘rooting’ for him, even whilst he was carrying out unspeakable acts of cruelty and retribution, on behalf of the mob, towards often very vulnerable people, although the sympathetic and compassionate side of his character often shines through his facade and he does stand up to his masters on more than one occasion, taking their punishment for this disobedience without complaint.

Sean has a weakness though and one which will ultimately cost him dearly. Nicole, the Don’s spoilt, petulant and demanding daughter. Her character was so sharply defined, that I found most of the scenes with her in, wanting to slap her for her pathetic attempts at trying to empathise with Sean, whilst all the while, winding him around her little finger, so that she can cajole him into granting her every stupid whim. Don’t get me wrong, I also wanted to shake Sean until his brains rattled, in the hope that he would actually come to his senses and start to see her for what she really was. I think that for both of them, the underlying reality of an impossible situation and a relationship that isn’t going anywhere, because the Don’s vice-like grip on power, and his financial and emotional hold over his motherless daughter is just too strong, is an outcome that they both know is inevitable and they are also both only too aware of which one of them will suffer for their disobedience.

The supporting cast of characters are, to a person, complex studies of human behaviour, who are all linked in some way to the violence and complexity of the rule of the mob. Jealousy and rivalry are seemingly traits of the job, with each almost trying to outdo the other in the heinousness of their actions and the lengths which they will go to, to ‘curry favour’ with their boss.

The story also invokes a great sense of ‘place’ and ‘time’. New York shouts from the pages, authentic in its physical detail, from ‘Throggs Neck’ to the ‘Meatpacking District’ and with the characters identifying with and absorbing into their own defined and protected territory. So much so that I could almost imagine myself there, living in fear and awe of these shadowy figures, as they go about their disturbing business of extortion and ‘protection’, amongst the fearful members of those communities.

The plot is action-packed and fast-paced, involving the reader in an experience which is authentic and disturbing, particularly when confronted with Mario, ‘The Don’, who has a justice system which transcends any official channels and codes of conduct and who demands a loyalty from his employees which is almost disturbing in its intensity and depth. However, Mario also has one weakness, his daughter Nicole. No demand from her is too much, no wish too much to grant .. until it comes to her choice of a partner who may have the potential to take her away from the protection of her father .. In this matter, he will have the final word and his word will be law, whatever Nicole’s wishes may be. Retribution for daring to flout his commands, is swift and brutal. Yet perversely, he is also a man of his word, which ultimately, is both ‘Skin’s’ undoing and his saving.

If I had one small observation to make about the story, it would probably be that there is not enough correlation between the opening couple of chapters for me. I can see why Maria would want revenge and retribution from the mob and why she therefore seeks out ‘Skin’ and ‘Griffin’. What seems a little skewed, is the way in which ‘Skin’ tells her his whole experience at the hands of the mob, including all the more personal details of his relationships and family, when he has only just met Maria and knows nothing about her. Perhaps this is just me being a little pernickety and this small point does absolutely nothing to detract from the overall power and strength of the storyline and characters. The poignant and touching ending to the story, is one of hope for the future, now that Sean has finally expunged the memories of his parents, both good and bad and is almost able to move on with his changed life, living, one suspects, by his own rules and disciplines, going into the future.

Powerful, fast-paced, action-packed, this is a story of one man trying to find his place in the scheme of things and maybe finding it eventually, in a place and time which he least expects.

This crime drama novel, was gifted as a request for me to read and leave my comments about, by its author, Adam Pepper and as such was free of charge.

Written by Yvonne
9 comments
‘A Dead Red Oleander’ by R.P. Dahlke
FacebookTwitter
My Thoughts About … ‘The Devil’s Dime’ by Bailey Bristol

Check out The Chalet: the most exciting new thriller of 2020 - with a twist you won’t see coming by Cooper, Catherine https://amzn.to/3ij13ax via @amazon 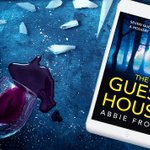