The Egyptian
by Layton Green
Review 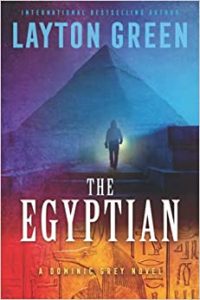 These seemingly separate events collide when private investigators Dominic Grey and Viktor Radek are hired by the CEO of an Egyptian biomedical firm to locate stolen research integral to the company’s new life extension product. However, after witnessing the slaughter of a team of scientists by the remnants of a dangerous cult thought long abandoned, Grey and Viktor turn from pursuers to pursued.

From the gleaming corridors of visionary laboratories to the cobblestone alleys of Eastern Europe to a lost oasis in the Sahara, Grey and Viktor must sift through science and myth to uncover the truth behind the Egyptian and his sinister biotech—before that truth kills them.

The City of the Dead, Cairo, Egypt

“Siti hummed to himself as he picked his way through the crypts and mausoleums shrouded by eerie blue fog. He thought he had outgrown the nervous childhood habit at Cambridge, where he graduated first in his class in biomedical engineering and gained the hand of Halima, a beautiful Cairene girl he never would have dreamed of approaching back home.

The humming resurfaced when the gambling debts started mounting and reached a feverish crescendo when he discovered what was really going on at his company’s compound. Now, as he dodged the tombs and piles of human detritus, looking over his shoulder with every step, he had to fight to keep the humming from becoming a siren call to the thieves and murderers that populated the cemetery after dark….”

I have been eagerly waiting for this second adventure in the ‘Dominic Grey’ series, ever since I was given the opportunity to advance read Layton Green’s first book The Summoner, where we were introduced to this great character.

I was surprised when Layton revealed that The Egyptian was in fact written before The Summoner and impressed that The Summoner was such a huge success as a retrospective introduction for the great concept of the series and the totally believable character of ‘Dominic Grey’.

In this highly charged environment Viktor, Dominic’s mentor and employer, plays an important, yet shadowy role.  Somehow he always contrives to provide a bedrock of calmness and stability within which Dominic can pursue his quarry and is always there when Dominic needs guidance and advice. He is such an interesting, complex and highly intelligent character, who is developing well in his role as advisor to his new protege.

This book was a review copy, sent to me by the author, Layton Green and as such, was complimentary.