The Hairdresser Of Harare
by Tendai Huchu
Review

THE HAIRDRESSER OF HARARE 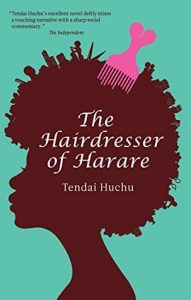 Vimbai is a hairdresser, the best in Mrs Khumalo’s salon, and she knows she is the queen on whom they all depend.

Her situation is reversed when the good-looking, smooth-talking Dumisani joins them. However, his charm and desire to please slowly erode Vimbai’s rancour and when he needs somewhere to live, Vimbai becomes his landlady.

So, when Dumisani needs someone to accompany him to his brother’s wedding to help smooth over a family upset, Vimbai obliges. Startled to find that this smart hairdresser is the scion of one of the wealthiest families in Harare, she is equally surprised by the warmth of their welcome; and it is their subsequent generosity which appears to foster the relationship between the two young people.

The ambiguity of this deepening friendship – used or embraced by Dumisani and Vimbai with different futures in mind – collapses in unexpected brutality when secrets and jealousies are exposed. Written with delightful humour and a penetrating eye, The Hairdresser of Harare is a novel that you will find hard to put down.

Tendai Huchu was born in 1982 in, Zimbabwe. He attended Churchill High School in Harare and from there went to the University of Zimbabwe to study Mining Engineering. He dropped out in the middle of the first semester, found work briefly in a casino and from there drifted from one job to the next.  Four years later he returned to university and is now a Podiatrist living in Edinburgh, Scotland. Tendai has a great love of literature, in particular the nineteenth century Russian novel.

Tendai has recently published two books in quick succession; The Hairdresser of Harare was his debut novel, closely followed by an eBook, An Untimely Love, a thriller with a romantic twist, dealing with yet another difficult issue, namely the  cultural, religious and political conflicts that surround Islam in the modern world.

I knew there was something not quite right about Dumi the very first time I ever laid eyes on him. The problem was, I just couldn’t tell what it was. Thank God for that.

There was a time that I was reputed to be the best hairdresser in Harare, which meant the best in the whole country.

Amai Ndoro was the fussiest customer to ever grace a salon and she would not let any ordinary kiya-kiya touch her hair. Having sampled all the salons in Harare – and rejected them all – she settled on ours.

“There’s only one secret to being a successful hairdresser and I’ve never withheld it from anyone. Your client should leave the salon feeling like a white woman”

“I have told this to everyone who’s ever asked me and what they all want to know is how d’you make someone feel like a white woman? The answer is simple, Whiteness is a state of mind”

“Dumi said something and she smiled. I knew then that the secret which made him the best hairdresser in Harare was that he knew how to make anyone feel like a woman”

‘All the prejudices of a divided Zimbabwe, with some of the lighter moments left in’

In his debut novel, Tendai Huchu has produced a cleverly crafted,  many faceted, multi-layered story, rich in storyline detail and character assessment, which highlights the political and social montage of a post-apartheid Zimbabwean population trying its hardest to survive the rule of a regime which relies on fear and oppression to maintain its control.

Rich with character and humour, The Hairdresser Of Harare,  is at once a gripping excursion through Zimbabwe’s landscapes and the poignant and often sad story of two people drawn together by mutual rejection from their respective families, illustrating only too vividly that wealth and position play no advantage in the human morality stakes, only in its ability to mask the truth and maintain a facade.

When we first meet Vimbai, she is a young woman who has plenty of history. Coming from an impoverished background, naive and beguiled by the bright lights, when she is raped and left pregnant by a philandering, smooth-talking rogue, she is disowned by her parents, for bringing shame on the family and is left to fend for herself and her child. She guards her daughter jealously, vowing to afford her every opportunity in life to better herself and with her innate sense of pride and determination to improve their quality of life, she takes full advantage of every opportunity afforded to her. From time to time we see this desire to rise up the social scale, overtake her thinking and start to question her morality. However, as her character grows and matures during the course of the several months we get to know her, we see her learn to temper her selfishness and impetuosity with compassion and understanding, as she defies the rules of convention to help the  friend who has changed her life forever, whilst potentially putting her own life in danger. She also learns the valuable lesson that she has never been totally abandoned by her siblings, who willingly place themselves in danger to help guide her on the right path in dealing with her moral dilemma.

Dumi, is a young man with a secret which could cost him his life at any point in time. He is from a wealthy and influential ‘party’ family, supremely confident in himself and his abilities, brash – BUT – deep down, a coward. When he is disowned by his family, who have their suspicions about his secret life, Dumi is quick to survive and prosper by his own wit and talent, never once taking into account the feelings and circumstances of the people he is walking over to achieve this. He clearly has some affection for Vimbai, however he is basically using her as a cover story, in his bid to ingratiate himself back into his parents lives. It isn’t that he particularly craves their acceptance, as he is like Vimbai in that he already has the love and acceptance of his sibling, however he does desire the large allowance they once afforded him and the trappings of their wealth and influential position. He places Vimbai in an almost impossible position, making promises which he knows that he will ultimately be unable to fulfil, then when the going gets tough and his secret threatens their very lives, he leaves her to discover the truth for herself, rather than being a man about things and telling her himself.

Reconciliation between the young couple, comes swiftly, but at a price which will leave them both at a turning point in their lives. Decisions have to be made and actioned quickly and both ultimately need to assess what is most important to them.

The secondary characters all either love to be liked, or like to be hated and feared, but all are richly described and fulfil distinct and important roles in the overall story of the two main protagonists.

The whole experience of reading the excellent social commentary which is,  ‘The Hairdresser Of Harare’, has  shown me a portrait of a country, ruled by a  repressive and cruel regime, where many of its people live in constant fear of the authorities and to speak out or go against the ‘norm’ means certain retribution. It also only serves to highlight the huge gap between the have’s and the have not’s and the utter brutality dealt out to those who dare to challenge the prescribed moral and social codes of society, by both the authorities and one’s own social peers.

This unforgiving landscape does also produce some lighter, humorous interludes and exchanges, from a populace which despite everything, is trying desperately hard to keep cheerful and make the best of their everyday lives, adding a great tenderness and poignancy to the story.

There is perhaps one area of the story which I wish had been more fully expanded upon, and that is the ending itself. Whilst I can fully appreciate the way that Dumi’s exit was played out and led to a natural closure for his character, I found my mind full of questions about the fate of Vimbai and what the future might hold for her.

Tendai, with his smooth writing style, authentic and genuine characters  has undoubtedly produced a work of contemporary fiction entwined with some subtle humour and innuendo, but scratch the surface and I see a forceful and strong piece of political and social satire.

As this was an author invitation to read and review, a complimentary download of The Hairdresser of Harare, was sent to me by Tendai Huchu.