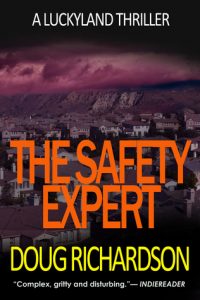 Ben Keller lives life by one simple rule. Safety first. Ben is keenly aware of life’s hidden dangers. Ben never smokes. Ben always uses the crosswalk. Ben always drives within the speed limit. He has to be because safety is his business. From his home in Simi Valley, California, one of the safest cities in the United States, Ben works hard at living a perfectly normal, perfectly uneventful, perfectly safe life.

Ben is in danger. Ben’s world is unsafe. Ben’s life will be changed forever. Again.

In 1996, Doug’s debut novel, Dark Horse, was published by Avon/Morrow in hardcover, followed two years later by his follow up, True Believers.

Doug Richardson has just completed this, his third novel, The Safety Expert. He continues to write and develop for feature films and television.

He lives in Southern California with his wife and family.

Old man Pratt shut his mouth and sucked back some fresh O2.

The oxygen meter continued. It sounded every bit like a death clock, counting down to his very last moments on earth.

“I don’t care what you think about me, who I am or what I done. I said what I said for me ‘n’ me alone. You understand?”

“Her boss had a deep wound inside. From that wound he had transformed himself into a human miracle, she thought. A man who had taken the horror from his life and built it into a safe little niche”

“It was plain. Both husband and wife were certain they knew the other’s secret. Yet neither knew anything at all”

When ‘Pratt’, a dying convict suddenly decides to have a pang of conscience, his well-meaning actions have a devastating effect on the future of so many, setting off an unstoppable chain reaction of events, which take so many lives into a downward spiral of self-destruction and misery.

Ben, is a model citizen; loving husband, and devoted step-father, existing in his ‘safe’ life, where every action is made only after the considered risk has been analysed and accepted. It isn’t until we discover the horrific demons which haunt Ben’s past life, that we begin to realise just how fragile is the cocoon he has built up around himself and how easily it can shatter into a million pieces, leaving Ben vulnerable once again to his raw feelings and emotions of hatred, revenge and retribution.

When we are first introduced to Stew, it quickly becomes obvious that he has a whole different set of demons all his own, which he battles on a regular daily basis. His naturally violent tendencies and addictions, are only barely controlled, still bubbling away gently, just below the surface veneer of domesticity and respectability he has built up around himself. Repressed memories of his past horrific crimes, are re-played in his mind as always being the ‘other persons’ fault, with himself having been provoked beyond all reason, to carry out the terrible acts of retribution and violence that he has inflicted on so many.

Detective Lydia (Gonzo) Gonzalez, is yet another in a long line of fiction detectives who is trying to juggle the pressures of family life, with the stress and demands of the job and probably achieving neither to their full potential. She makes the fundamental mistake of allowing her heart to rule her head and looses her cool on more than one occasion, only then does she realise that her actions have probably made an already bad situation, much, much worse. In trying to make reparation for her mistakes, her life as well as her career are on the line. Loosing one and narrowly saving the other, forces her to re-evaluate her life and what it really means to her.

The two main supporting players, as this terrible scenario unfolds, are Alex and Pam, Ben and Stew’s respective wives. Although they outwardly appear to be at opposite ends of the social spectrum and are destined never to meet, they are not so different as you might think. Both are determined characters, who will defend their homes and loved ones with their own lives if necessary. Neither however, are strong enough to withstand the combined force of the hatred between their husbands and are powerless to influence the outcome and the effect it will inevitably have on all their futures.

All of the remaining supporting characters are well developed and defined, in a way which is both sympathetic to the overall storyline, yet which is also designed to highlight both their individual strengths and weaknesses.

Ben and Stew, complex and at times almost frightening characters, two men both fighting to keep buried dark memories from the past, controlling demons which, when the layers of the story are peeled back, find them both pushed beyond their limits, hunter and hunted both.

The fast paced storyline flows naturally from one phase to the next, on this horrific roller coaster ride, of high tension and exposed, raw emotions. The storyline is a carefully measured piece of writing, which is equally plot and character driven, creating a finely balanced narrative, which keeps its pace and action right until the very last page. The ending however, did come as something of a surprise and wasn’t quite what I had expected, just one last twist in the tail of this venomous, deadly snake named ‘revenge’.

Given Doug’s hitherto successful screenplay writing career, I think that The Safety Expert  would definitely,  easily lend itself to being adapted as a screenplay script for a film and even the title sounds fantastic as it is.

The Safety Expert had me in its grip and on the edge of my seat, from the very first page, to the very last word and even then I didn’t want it to end!

A complimentary copy of this book, for review purposes, was made available by the author.