The Tapestry Of Love
by Rosy Thornton
Review

THE TAPESTRY OF LOVE 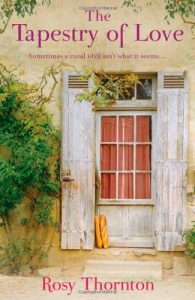 A warm and uplifting story of how a woman falls in love with a place and its people: a landscape, a community and a fragile way of life.

A rural idyll: that’s what Catherine is seeking when she sells her house in England and moves to a tiny hamlet in the Cevennes mountains.

With her divorce in the past and her children grown, she is free to make a new start, and to set up in business as a seamstress.

But this is a harsh and lonely place when you’re no longer here on holiday. There is French bureaucracy to contend with, not to mention the mountain weather, and the reserve of  her neighbours, including the intriguing Patrick Castagnol.

And that’s before the arrival of Catherine’s sister, Bryony …

Rosy Thornton, has never ventured too far from the small Suffolk village where she was raised, moving just across the border, into the neighbouring county of Cambridgeshire, where she has made her home in a small village, with her family.

Her qualifications and training have taken her into a career as a lecturer and Fellow in Law, at Emmanuel College, Cambridge.

Until 2004, Rosy had little, or no interest in writing, until she first became interested in, then addicted to ‘Fanfic’. Discovering that, not only did she enjoy participating in the Internet phenomenon, but that she was actually rather good at it, she was spurred on to write her first independent novel.

“Applying the handbrake, she sat back and watched the passing tide.

They were streaming down the hillside to the right, above the road, a bobbing phalanx maybe twenty or thirty animals wide, before slowing and spreading wider as they reached the brief plateau of tarmac, the way water pools below a flight of rapids. A few stragglers circled off on to the grass verges and began to graze. But the central current continued its course and began to pick up momentum again as it narrowed to siphon through a gateway gap in the drystone wall on the left …”

“Sometimes a rural idyll isn’t what it seems”

Until I started to see the reviews of this book, appearing on various blogs and was then, myself, contacted by the author, I have to admit that Rosy Thornton was not a name I was familiar with.

So many of you have already written some fantastic reviews about this book, that I fear many of the superlative adjectives have been expressed more than once … but here goes with my thoughts about the book.

The beautiful cover art, caught my attention immediately and set the scene in my imagination, before I had even started to read.

Right from the start, there is a feeling of the author’s warmth and empathy, towards both her characters and their environment.

All the characters are alive and believable, evolving and establishing themselves, throughout the length of the story, as relationships are formed and changed.

Brilliantly descriptive passages about the remote and often difficult mountainous conditions, that still allow the beauty and majesty of the scenery to shine through.

The sense of community and co-operation that exists in such an insular society, where neighbours are just that, through a small kindness or spontaneous act of friendship, and ties, once made, are strong and permanent.

The plot is relatively simple, yet the romance is so beautifully developed and so moving, in no way rushed, allowing Catherine and Patrick all the time in the world to explore their relationship and their feelings for one another.

A relationship that is almost threatened by sibling rivalry between Catherine and her sister Bryony, who visits from England. The changing relationship between the sisters is dealt with sympathetically and with great thought, as they are both forced to come to terms and deal with, their own vulnerability, following the death of a loved one.

I was with Catherine as she settles into her new life, not just watching from the side-lines, but actually there and part of the experience. Almost feeling the sense of excitement, yet feeling her vulnerability and trepidation, as she embarks on her chosen new life alone,without the support network of friends and family that she is accustomed to and vowing not to look back, knowing that I would probably never be brave enough to change the course of my own life in such a drastic way.

The unhurried pace of settling into her new home, where each detail is so vivid that I could imagine myself sitting on the porch of this beautiful, yet isolated cottage, drinking in those fantastic views and recalling similar views from my own lovely holidays in the Bernese Oberland of Switzerland.

Everyday events and tasks, that hitherto would have been mundane and performed rote, now become  interesting and new, with me beside her every step of the way.

Her passion and love for creating her tapestry pieces, by which she hopes to make a name for herself  and her uncertainty and frustration, when having to deal with the alien business rules and regulations of the region, all show her vulnerability, yet growing inner strength when she is able to achieve even the smallest of victories. Would I have been so calm and circumspect? I doubt it!! and oh! to be so artistic and talented, it made me quite envious.

This is a well structured journey through the first year of Catherine’s new life, with all its changing seasons. The uncertainties of change, the sadness and loss of saying a final goodbye to a loved one, turning her back on all that is familiar and safe, and the  slow awakening of a passion and romance such as she could never have imagined.

I was asked to read and review this book by the author, Rosy Thornton. As such, this copy was complimentary.

This in no way influenced any comments I may have expressed about the book, in any review I may have compiled. Any thoughts or comments are my own personal opinion.

I shall, without doubt, be adding Rosy Thornton to my list of authors not to be missed and putting her three previous books firmly on  my ‘wish list’

Definitely a book to savour and one that left me with a warm and cosy feeling, long after it had ended.