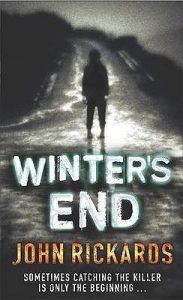 They have the body of a slaughtered woman.

They have a half-naked man standing over her.

They have no idea how to make him talk.

And so they call in ex-FBI interrogator Alex Rourke to the traumatized Maine town of Winter’s End.

The Boston Private Investigator knows the place well – it’s where he grew up. But as Rourke probes the mind of the enigmatic ‘Nicholas’, he is forced to re-examine his hometown and his own past – and what he finds is a place built on secrets.

Strange things have been happening in Winter’s End. The question is why. And if the man in custody does hold the answers to crimes both present and past, then Alex will have to get to them – and quickly.

Because it soon becomes clear that what Nicholas has been waiting for from the beginning – is Alex Rourke. 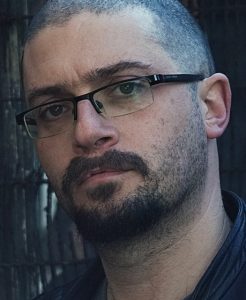 John Rickards, cyberpunk and thriller writer, was born in 1978, in London, England.

He graduated from Cardiff University, Wales with a degree in Environmental Engineering, although he has never actually worked in the field.

He has instead, worked as a freelance journalist in the shipping industry on a succession of magazines and news publications, often in an editorial role.

Writing under his real name, John Rickards, he became a novelist and signed with Penguin Books at the age of 24.

In 2003, the character of Alex Rourke made his first appearance in Winter’s End, with a further three adventures following between then and 2008.

Following a lull in his writing career, John re-surfaced in 2010, with a brand new line in the genre of cyberpunk and under his new pseudonym of Sean Cregan. A total of two books to date have re-established him as an author to rival the best in the field of both genres.

He lives in Eastbourne, Sussex, on the South coast of the UK, with his partner and son.

The first thing to say about ‘Winter’s End’, is that this book was written back in 2003, so crime detection procedures and forensic analysis methods have moved on apace since then. Even so, I think that this story stands its ground very well in the genre, even today and John Rickards is way up there with his contemporaries of the time … the likes of John Connolly and Michael Connelly.

The choice of cover art for this edition, was spot on, setting the scene for the dark and menacing force which has gripped small town America. Where fear is contagious and neighbour suspects neighbour, as the chilling truth is uncovered, piece by piece. A mysterious puzzle which everyone has their suspicions about, but which, to a person, they would rather had remained hidden in the depths of time.

Alex Rourke, once a child of this introspective community, is a flawed and broken man, abandoned by the system of justice he strived so hard to uphold, now working freelance on the outside, although still on behalf of truth and fairness. The incident which brought about his breakdown, has left him a loner, lonely, vulnerable and seemingly unable to commit to, or become close to anyone, so returning to his hometown to help out a colleague in need, isn’t really what he needs right now. His journey becomes something of a pilgrimage of self discovery, where he uncovers some pretty unpalatable home truths and dark secrets about his own family, that he isn’t expecting.

Romance is also on the cards for Alex, in the shape of pathologist, Gemma. However, whilst there is an obvious mutual attraction between the two, it is left to Gemma to do much of the groundwork. The two seem like a great match, with Gemma a caring, yet carefree individual and Alex responding to her nurturing in a positive and committed way, horrified when it seems that she might be in danger. Whether there is a future for them as a couple, I wouldn’t like to say, but it would seem that they are prepared to take things slowly for now, living their separate lives apart from one another, with Gemma more than respecting Alex’s need to re-examine his future and the direction in which he would like his life to go.

In our unknown ‘villain’, whom Alex has named ‘Nicholas’, we have a chilling, dark character, full of hatred and bitterness, seeking revenge in a terriflyingly final way, for wrongs he feels have been committed against him, both by the establishment in general and certain individuals in particular. His methods are calculating and systematic, his results brutal and final. His actions are all leading up to one decisive, irrevocable show-down, when the full extent of all the heinous injustices against him will be revealed and his final act of retribution will be meted out. Given the things that had happened to ‘Nicholas’ during his early years, I had to admit a grudging feeling of sadness and remorse for him, as I would for anyone else who had endured such incarceration and humiliation, as to alter the balance of their mind so completely.

The plot isn’t particularly fast paced, the moves have already been pre-ordained and the outcome a foregone conclusion, unless Alex acts quickly to change it. There are several twists and turns, as Alex tries to manipulate the endgame and trap his suspect, however the whole story is more one of a titanic battle of strength of will and mind games between two evenly matched adversaries. A plot firmly based on some great characterisations and human observations, with all their warts and flaws.

I had a couple of endgame scenarios mapped out in my head and was glad to see that I wasn’t too far off the mark with one of them, although I was never really sure which it was to be until right towards the end, which kept the suspense and tension building nicely, as I avidly devoured the pages.

This is a debut novel for both author and character and was curtailed into a short series of just four adventures in total. I shall be more than interested in acquiring the remaining three books, to see just where John takes Alex on both his professional and personal journey forwards.

This book was actually one from my own TBR mountain, although removing it hasn’t made any significant dent in the look of my shelves. It  would undoubtedly have been a charity shop ‘find’, at some point in the past and I only wish I had dug it out from its hiding place sooner. I personally do not agree with ‘rating’ a book, as the overall experience is all a matter of personal taste, which varies from reader to reader. However some review sites do demand a rating value, so when this review is posted to such a site, it will attract  5 out of 5.