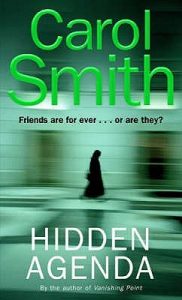 Devastated by the shocking news that an old schoolfriend Suzy Palmer faces execution in Louisiana for the murder of her children, London rabbi Deborah Hirsch enlists the aid of her former classmates in an attempt to get her off.

The Suzy they’ve known and loved all these years could never hurt a fly; she must be innocent.

As Death Row draws steadily closer, the friends slowly piece together what has happened.

– and realise that even more shocking than Suzy’s plight is the knowledge that one of their number has betrayed her. 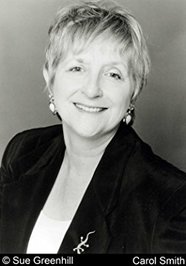 Carol Smith, was born, and still lives in London, where, encouraged by her English teacher mother, she was a prolific storyteller from an early age.

Having worked for years as a literary agent, looking for talent and directing careers, Carol finally stumbled on the right idea with which to launch herself as a writer – contemporary thrillers loosely based on the concept of “What Would Happen If…?”

She wrote the first one in just nine months at weekends, then after three years she closed the agency in order to focus full time on her own writing career.

Carol describes what she writes as “Hitchcock-on-the-page” – psychological thrillers that are not quite crime, as she mainly steers very clear of police procedure.

“Friends are for ever … or are they?”

I am not sure if Carol Smith intended for me to be kept in suspense about the identity of the murderer until the end of the book, or whether it was ultimately the underlying powerful story of female friendships, that was meant as the true focus for the reader.

If it was the former, then I am afraid to say that the book dismally failed in it’s objective, as I had worked out the identity of the killer, by the end of the second chapter.

If the latter, was the primary objective, with the reader knowing the killer’s identity, but needing to get into the characters minds to arrive at a motive for the crime and why it was committed by that particular person, then I felt that the book got the mix right, with the final twist at the end bringing all the components together.

The ‘Famous Five’; Suzy, Helen, Miranda, Lisa and Deborah, childhood friends. Now in adulthood living separate lives, but still close, although there are some secrets that will remain hidden forever, together with the knowledge that hidden female jealousies can poison life and lives.

Suzy’s house and parents are the focal meeting point for the friends as children, as Gwen and Guy appear easy going, yet strong and supportive in ways that none of the other parents seem able to achieve. The arrival of a new girl, is therefore  a little unwelcome, especially when she demands more of Gwen’s time and understanding to help her adjust and fit in.

Suzy begins to feel somewhat excluded, so whilst her friends are confiding in her own parents, she is seeking help and advice from her successful artist Art Teacher, Maggie.

It is Maggie’s calm and sensible approach to Suzy’s present day predicament, that helps the friends piece together some of the important clues to the real killer’s identity: assumed suicide, seemingly indisputable accidental deaths, secret clandestine meetings and affairs, the visits unannounced but all very opportune.

Whilst it falls to Markus, Lisa’s much younger musician boyfriend, as an almost total stranger to the rest of the group, to make the final connections, that they are all too close to see.

For me, it was the compelling psychological insights in the story and the interaction between the characters, that kept me reading until the end and had I stopped earlier, then I would have missed the final act, that brought the whole plot to it’s natural conclusion.