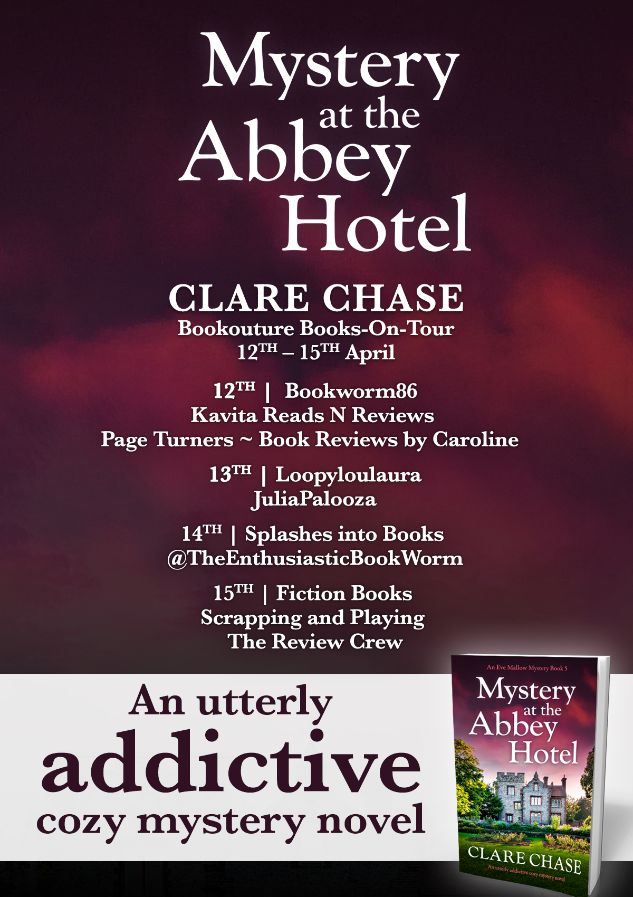 Eve Mallow’s stay at the luxurious Abbey Hotel takes a turn for the suspicious when the owner is murdered – leaving Eve surrounded by suspects!

Saxford St Peter is Eve Mallow’s beloved home, but she can’t resist the chance to spend a weekend in the nearby Abbey Hotel, famed for its glamorous owner Debra Moran and an array of celebrity guests. For a confirmed people-watcher like Eve, it’s perfect: she can observe the rich and famous while sipping tea in the gardens, her faithful dachshund Gus by her side.

But her relaxing break takes a shocking turn when Debra is found lying dead in the shadowy woods around the hotel. One of Eve’s fellow guests didn’t come to the Abbey for fine food and delightful décor – but to kill.

When the investigation gets underway, Eve finds herself trapped with a wide range of suspects. Could it be Debra’s new friend Harper, who inherits everything? Her ex-husband Chester, still seething over their messy divorce? Or her estranged sister Amelia, who came hoping for reconciliation, only for Debra to shut the door in her face?

As Eve roams the hotel, searching for clues and hunting down alibis, she uncovers a whole host of secrets. But can she find the truth before the killer brings her holiday to a deadly end? 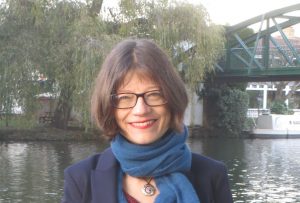 Clare Chase writes classic mysteries set in her home city of Cambridge and is fascinated by the location’s contrasts and contradictions. Her aim is to take readers away from it all via some armchair sleuthing in atmospheric locations.

Like her heroines, Clare is fascinated by people and what makes them tick. Before becoming a full-time writer, she worked in settings as diverse as Littlehey Prison and the University of Cambridge, in her home city. She’s lived everywhere, from the house of a Lord to a slug-infested flat and finds the mid-terrace she currently occupies a good happy medium.

As well as writing, Clare loves family time, art and architecture, cooking, and of course, reading other people’s books.

Keep up with all Clare’s latest news at her website

The guests at the Abbey Hotel had scattered in all directions across the courtyard, brightly lit by the building’s tall windows, then plunged into the woods. The canopy of trees felt oppressive; the darkness of late evening was intense. How long was it since they’d started their search for Debra Moran? Five minutes? Twenty-five? Eve’s mind had gone blank.

CHAPTER ONE – ONE DAY EARLIER

‘Wow, Gus, just look!’ Eve Mallow switched off the engine of her Mini Clubman and turned to face her dachshund. ‘I don’t think I’ve ever stayed in a place with so much history.’ Eve had approached the Abbey Hotel from the side, down a winding drive, through woods dense with Scots pine, beech and oak. It meant the building had come as a surprise: a grand reveal as she rounded the corner. And it took her breath away…

“Debra made her think of the most exotic and fancy-looking chocolate in the box – you couldn’t resist trying it, but it was fifty-fifty whether you’d regret it or not”

“The more you knew about people, the better you coped when they threw you a curve ball”

“When Eve drained her coffee and walked through at the appointed hour she felt like someone in an Agatha Christie novel, except that Palmer was no Poirot. The grand unveiling of the villain would have to wait”

“Eve watched the pair of them as she got up and turned to leave the pub. She needed to get outside. It was as though Edmund sucked the oxygen out of the air around him”

Wow! I didn’t join this series until book #4, so this is only my second outing with amateur sleuth and obituary writer, Eve Mallow.

However, if my limited experience is any judge of the direction of travel, to me the series just seems to be improving with each new case which comes along, seeing Eve really growing into the role and rapidly making it her own!

The opening pages really set the groundwork and background for the story, which is just as well, because once the action begins, there’s no going back or taking too much time to pause for breath, lest you miss out on one of those vital stealthy clues. The storyline moves along at a steady pace with Eve at the helm, steering the investigation in the direction she wants it to go. There is that satisfying release of a long-held breath when the final page is turned, as Eve always leaves her perpetrator reveals until the very last minute, and usually when she finds herself in mortal danger and in need of help!

For a mystery series, author Clare Chase does like to write a substantial book, which is quite a lengthy read. However the storylines are so replete with good descriptive narrative and dialogue, that every page is full to the brim, with barely a wasted word or punctuation mark. Every scene is so rich in atmosphere and each character has such visual impact, that I can imagine myself sat in ‘Monty’s’ tearooms, eating one of Viv’s delicious cakes and drinking coffee from her mis-matched china – whilst surreptitiously eavesdropping on all the latest gossip of course!

This multi-layered, intense and well structured, traditional murder mystery, is written with consummate ease, total authority and great confidence, by an author who knows exactly how she wants her storyline to pan out and just how her characters should behave. She expertly manages to combine her amateur sleuth’s ‘day job’ as a freelance obituary writer, with her part-time hobby of always seeming to be in the right place at the right time, when murder comes knocking and the police, with whom she has a decidedly love/hate relationship, are nosing around looking for suspects.

Whilst still a relative newcomer to the village, the locals are beginning to close ranks around Eve, when they know she is working on a case, although one or two individuals do have very loose tongues, so she has to be careful who she confides in, as careless talk can often cost lives in such a close knit community. Of course, it also doesn’t help either Eve or myself, when the author of the  investigation keeps throwing in red herrings, in such an assured and seamless way, constantly changing the dynamics and sending both she and I off at a complete tangent. Like Eve, my own suspect list started off with the names of just about everybody who was at The Abbey Hotel on that fateful evening and it then became a game of roulette, as names were deleted, then added back in again, only to be crossed off once more, as events unfolded, motives changed and the bodies started stacking up, although Eve eventually had to admit that she maybe should have been focussing her attention a little closer to home.

Clare has built on her existing addictive base of core characters, fleshing them out, affording them more of a voice, control and influence over their input to both the village life in general and more specifically in aiding and abetting Eve’s penchant for collecting bodies and suspects, seemingly wherever she goes. Each new case brings with it an additional cast of multi-faceted ‘extras’, who are all investable and easy enough to connect with for the duration of their stay in this small corner of Suffolk, even though none of them were particularly likeable and had motives a plenty for murder. Eve is really beginning to forge a place for herself in Saxford St Peter and even her romance status might be looking up, with a little encouragement from a few surprising quarters, including her own children, although I’m not sure that Gus the dachshund is going to enjoy sharing Eve too much and Eve herself is really going to have to watch her habit of talking to Gus like he is a real person – which of course he is! 🙂

The ‘classics’ will always be exactly that for me, but move over just a little Miss Marple, to make room for Eve Mallow, who is undoubtedly earning her place beside you!