“I killed a woman tonight. One shot through the heart.”
Night Shield by Nora Roberts
Review 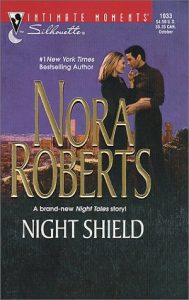 “I killed a woman tonight. One shot through the heart.”

Undercover as a waitress, Detective Allison Fletcher is on the case that will make her career – exposing an organised gang of robbers. Then, at the scene of one of the burglaries, she has no choice but to shoot the woman holding a gun on her.

The robbers’ psychotic, controlling brother knows who killed his beloved sister and he’s out for revenge. When he breaks into Allison’s flat, writing blood-red words on the walls, Allison knows she’s in terrible danger. And her cop’s shield won’t be enough to protect her from a madman …

Born in Maryland, USA, Nora, the youngest of five children, married young, briefly worked as a legal secretary, then settled down to life as a stay-at-home mother to her two young sons.

This is where we find her in 1979, now becoming a little bored, during a prolonged spell of winter storm weather, which finds them confined to the house.

Nora sits down and commits to paper, some of the ideas she has for a romantic story, and so is born a prolific and highly successful career, first with British publisher Harlequin and subsequently with its American counterpart Silhouette, who needed to inject an American theme into the genre, before US authors got their breaks.

I started writing as a way to save my sanity, and fell into a job that I love

Nora also writes under her pseudonym, as J.D. Robb. Popularly referred to as the ‘In Death’ series of suspense books, there are now some thirty titles in print, with more being added to the portfolio each year.

Together with her second husband, Nora has opened ‘Turn The Page’ a bookstore in Boonsboro, MD, USA

Mix duty and lust and you end up compromising one and being burnt by the other.

No other woman had ever caused him pain.

Women curl up with books, guys stretch out

‘Romance And Suspense, With An Edge!’

Since reading ‘Night Shield’, the 5th and apparently last story in the ‘Night Tales’ series (published back in 2000) and doing a little more research, I have discovered that this is a second generation book for the characters of Boyd and his wife Cilla (Allison’s mother and father), who appeared previously as the main protagonists in ‘Night Shift’, the 1st book in the series. Luckily, ‘Night Shield’ works great as a stand alone novel, as yet again I enter a series completely out of sequence!

This book is billed in the genre of ‘romantic supense’, which just about summed it up as the high calibre mix which Nora Roberts is so expert at achieving, although mixing the elements of romance and thriller together, in what is a relatively short book, meant that for me, the plot was suspenseful, but a little predictable and I got to know who the perpetrator was before the book was even half way through. Obviously the sex was pretty hot, steamy and very much inevitable, however I did think that there might have been a little more tension and desire between Ally and Jonah, rather than it being a purely physical attraction, albeit a distinctly chemically explosive attraction!

One of the most seamless and for me, interesting aspects of the story, was the consummately professional way in which the author re-introduces the characters of Boyd and Cilla to the equation, after such a lengthy absence, without the need for long explanations about past events, making it appear that they had simply stepped outside and had never really gone far away.

The characters are believable and well drawn, the plot suspenseful and fluid, giving the definition and focus necessary for the length of the book. The two main protagonists in the story, Jonah and Allison, are tough, egotistical, complex and career focused, although basically all of this bombast is simply covering up their searching for a sense of place and belonging, their unspoken vulnerability and their reticence at admitting their underlying and growing feelings for one another.

Jonah definitely still has issues with having the police around him, despite the fact that his life was turned around at a very early age by Allison’s father Boyd, at that time a police officer, but now risen up the ranks to commissioner. He feels that, although he still keeps in touch with Boyd from time to time, it would be unprincipled and disrespectful of him to impinge too much on the Fletcher hospitality, and especially not to become involved with their daughter Allison, who has followed in her fathers footsteps, joined the police and is now a detective.

Jonah is recognizably grateful that his childhood life of crime on the streets was curtailed and he is now able to pursue a legitimate career as a club owner, even to the point that he now takes people who are down on their luck or have fallen foul of the law and gives them the break that can make the difference to them, although we only discover this about him as Allison starts to peel back the tough veneer he has built around himself, to reveal some of his weaknesses and the softer and more humble side to his personality.

Allison is very much aware of the volatility of both the relationship that is growing between herself and Jonah and the explosive chemistry which she is fighting so hard to contain, as she strives to remain professional whilst working undercover at Jonah’s club, yet still snare her man, who is so vulnerable in many ways.

She is determined to prove to him that he is as good as any member of her family and that he should feel no embarrassment at mixing with them as equals, a scheme which is helped along by her mother with whom Allison has a loyal and loving bond; although she maybe isn’t as demonstrative with her mother as with her father, with whom there is an unspoken and unshakeable work/life shared bond, unique to themselves.

Despite Allisons belief that she has control over her life and work and that she is able to keep the two separate, when Jonah is willing to make the ultimate sacrifice for her, the time for pretence is over and true feelings must be revealed.

When two such strong willed, highly charged, and emotional characters come together, sparks are bound to fly!!!

This book has been sat in my ‘To Be Read’ pile for some time, acquired as part of a job lot, when I was running my small on-line bookselling business.

When I decided to call it a day, all of my books, totalling some 7,000, were donated to various charities and libraries, although I tried to hold on to as many of the fiction titles as I could, as I just couldn’t bear to part with them until I had read them, (I actually still have about 600 books … and counting!!).

‘Night Shield’ is probably not a book I would have bought myself, but it looked like a comfortably concise book, with a straightforward storyline, just the thing for a weekend curled up with a good book. I am definitely a ‘curler’ not a ‘stretcher’!!