To receive the email of an author reaching out to me through the ‘contact’ page of Fiction Books always gives me a bit of a buzz. However, to then have that author make a return journey to the site, to share his latest book, is very humbling. Last time Stewart gently talked me out of my comfort zone and into his romcom world, this time he has tempted me to cross the boundaries into the unknown territory of YA fiction, a place I have seldom visited. Let’s see how my journey went! 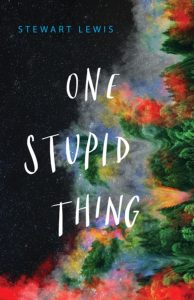 It was just one stupid thing that happened…

Summer on Nantucket island. Three high school friends drinking warm beer on a rooftop. Everything is cool, until a seemingly innocent game takes a sinister turn, and the course of their lives are changed forever.

For a year, they keep it a secret, until the following summer when they meet a mysterious girl with her own dark past who may have the answers they are looking for.

A story about friendship, mistakes, and the quest for redemption, One Stupid Thing follows Jamie, Sophia, Trevor and Violet as they contend with the consequences of their choices, navigate the drama in their individual lives and try to uncover what really happened on that fateful night.

One Stupid Thing follows four teens as they navigate the mystery surrounding a tragic, deadly accident that leaves them wondering: who is really to blame?

Catch up with Stewart’s latest news at his website

“I am grateful for the island of Nantucket, which has always felt like home to me. Its awe-inspiring beauty, colorful people, and way of casting a spell. I’ve always wanted to set a book there, and I hope I’ve done it justice”

“The three of them stood together on the widow’s walk, a small lookout platform accessed from the attic. The mist crept around the rooftops of the houses, and though they couldn’t see it, the ocean raged in the distance. It was chilly for late August, but they were still dressed for summer. Laughter drifted up from the Beechman’s party downstairs, but it sounded forced, almost maniacal.”

“As he walked around the bend to the more private part of the beach, he could just make out a girl in the distance. She was sitting on a bench in the middle of a long stretch of faded wooden stairs that meandered down from the cliff walk. He didn’t want to come back to the island and had been happy when his parents told him they were going to stay in Connecticut, but his aunt Gia was renting a cottage in Sconset, and they insisted he go and stay with her for the summer. Of Course, his parents didn’t know what had happened at the end of last summer….”

“His father made truckloads of money, but all the money in the world couldn’t buy someone a heart, or a moral compass”

“That was the thing – adults thought they knew everything, but a lot of times they had no idea”

“It’s as if Lester and his money was a disease, and now it was spreading into her whole family”

“Tracks weren’t straight, and life was a crooked game”

“It was just one stupid thing that happened…”

Ahead of my review, I do have to come clean and admit that YA fiction is not a genre I tend to stray into too often. It is a long time ago since I qualified for reading inclusion in this age group, and I am in no doubt that the expectations and attitudes of Stewart’s modern day target audience, have advanced in leaps and bounds since then, so much so that often, to me as a reader, the lines seem very blurred between YA and adult fiction. This story is targeted at a 14-18 year readership and from my amateur eye, it seems to be pitch perfect.

The story gets going from the very first page, no preamble or scene setting, for readers keen to engage immediately. The storyline moves along at a good pace and with the constantly shifting sands of emphasis, towards an ending which although not quite as replete and satisfying as it might have been, is full of future hopes and latent potential for its cast of characters.

Told in clearly marked, seamlessly alternating chapters and narrated crisply from multiple viewpoints, this well developed, multi layered storyline is sympathetically told, with real heart and a little humour, by an author who is a consummate storyteller, totally in tune with his audience and knows exactly how to engage with them.

Some lovely, visually descriptive narrative and dialogue, transported me to beautiful Nantucket Island, with featured place names I could check in on and plot the action for myself. Now – if only I could drag myself away from the virtual golden sands and surf!

From an angst inducing accident, with tragic consequences at its core, this storyline rapidly evolves into a compelling and intriguing mystery thriller, which has many more sinister and deadly implications for this trio of guilt ridden teenagers and the individual demons they each choose to battle, alone and divided. A new friend they make one year later, who reunites them as a reluctant group, unwittingly opens a whole new can of worms, unleashing the potential to threaten the safety and the very lives of them all, with the information she has in her possession. Manipulating and using a little knowledge, based on some very thin evidence, may be a dangerous thing, but is it a risk worth taking, if exposing the truth can exonerate them from the crimes they are no longer certain they are responsible for and help them to uncover a glimmer of hope and redemption from all the tragedy events have caused?

As if shouldering the burden of their real or imagined guilt, which has torn their friendships apart, isn’t enough, each of the group of four has family and personal issues which are slowly eating away at them, destroying their confidence, swiping at their self-worth, and undermining the bedrock foundations of their fragile hold on any semblance of ‘normal’ family life. This quickly evolves into a secondary parallel story, which exposes and highlights the underlying multi-faceted flood of emotions and insecurities, which influence the aspirations and outlooks of such a dysfunctional, emotionally disturbed group of young people, explores how the actions and behaviour of strangers can help to rebuild and heal the rifts between them and ease their troubled minds, whilst helping them discover a renewed and rewarding sense of self-worth, thus making them comfortable in their own skins and assured of their individuality and identity.

Stewart has developed a cast of well defined and relatable characters, who grew exponentially in stature and maturity during the course of that one fateful year. I kept having to remind myself that they were all still only your typical teenagers, complete with all their regular emotional baggage and hang-ups, aside from the extra pressure and stress events in the recent past had placed on them. From that perspective they were not particularly easy for me to connect with, however that’s purely an age issue and I was still able to detect their vulnerabilities and their searching for a sense of belonging and purpose. Once they had collectively decided to put their past unspoken differences aside, their characters developed some real depth and meaning, with some good strong dynamics and synergy growing between them, which you just knew would transcend that teenage phase in their lives and keep them firm friends on into adulthood.

There were also a few poignant moments of teenage naivety and humour, which Stewart played to perfection, although to be fair, I really need to know which six year old precocious child genius he knows, who he used to model the character of Bryce. I’m still trying to work out whether he would be the perfect child protegee to live with, or the devil child from hell (no disrespect intended Stewart, if this was indeed a family member or a friend’s child). Whichever, he certainly gives Trevor a run for his money and I believe, helped him get his thoughts and feelings into some kind of perspective. Bryce added a nice touch of grounded humanity to the story!

“What seems to us as bitter trials are often blessings in disguise.”

A PDF of this book, was kindly gifted to me by its author, Stewart Lewis, with no expectation or request for review