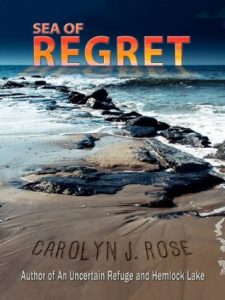 A woman determined to hold onto her land.

Financial sharks out to make a killing.

A life-or-death struggle by the SEA OF REGRET.

A year after the violence and tragedy of AN UNCERTAIN REFUGE, Kate Dalton’s life is shattered again. Developers want Evie Hopkins’ former dairy farm on the Oregon Coast, want it bad enough to sabotage the Castaway Beach Wildlife Rehabilitation Center she runs there. Aligned with developers and hoping to cash in on his inheritance early, Evie’s son claims she’s losing her mind and intends to prove that in court.

The wildlife center is both home and place of healing for Kate, for Jackson Scovell who traded alcoholic oblivion for life with her, and for Way-Ray, a boy orphaned by murder. They fear for Evie and the sick and injured birds and animals she rescues and nurtures, but they vow to support her decision—whether it’s to sell or to fight.

As Evie agonizes over her choice, protests and politics divide the community. Threats and violence escalate. Then two hired killers trap Kate, Jackson, and Way-Ray at a remote cove. And time runs out.

She grew up in New York’s Catskill Mountains and graduated from the University of Arizona.

She logged two years in Arkansas, with Volunteers in Service to America and spent twenty five years as a television news researcher, writer, producer and assignment editor, in Arkansas, New Mexico, Oregon and Washington.

Carolyn founded the Vancouver Writers’ Mixers and is an active supporter of her local bookstore, Cover to Cover.

Keep up with all Carolyn’s latest news at her website

“Control, he said, wasn’t like electrical current. It didn’t have to alternate in equal degrees. Neither did it have to flow just one way. Control was like water that could be released or dammed or diverted. It could wash in and out like the tide. It could even evaporate”

“But people do change,” Kate said. “Yes. But mostly to survive, or when someone forces them to, or when it hurts too much not to, or because they have a chance at what they want most only if they give up what stands in the way.”

“Kids love secrets. It’s a way to have control in a world full of adults”

“If politics makes for strange bedfellows, the pursuit of money does the same.”

‘Sea Of Regret’ is the follow-up book to ‘An Uncertain Refuge’ and whilst reading the books in order of publication might assist somewhat with character recognition, I believe they can be treated as individual stand-alone stories, equally well.

Having enjoyed ‘An Uncertain Refuge’ so much, I had high expectations of ‘Sea Of Regret’ and I was certainly not to be disappointed. This is another tense, high octane thriller, where the action is fast paced and relentless. The storyline is strong and believable and the already damaged and complex principle characters are becoming well developed, with some interesting narrative and dialogue.

Carolyn has a keen eye for detail and an excellent descriptive writing style, which encompasses not only her characters and their individual storylines, but also the environment in which she places her protagonists and where all the action takes place. The sense of conflict, both emotional and physical between the characters, was managed beautifully, without being unnecessarily overdramatised. For me this all added up to a complete experience, where the stakes couldn’t get much higher.

I could only admire Kate’s resilience and gutsy determination to face her own demons and come to terms with the many new and difficult emotions and relationships, which as a hitherto rather insular loner, she has never allowed into her life before. When she is finally willing and able to embrace the knowledge that there are people in the world who genuinely love and care for her, she becomes fierce in her instincts to protect them and nurture the relationships.

The slow burning romance between Kate and Jackson isn’t going to rock the world, however the bond and understanding between them is becoming ever more intense and deeply rooted, with Jackson beginning to find solace and peace in his life with Kate at his side, after the trauma of his military years and his fast developing addiction to drink, as his only way of coping with life. Having Kate, Way-Ray and Evie to focus upon, has given him a renewed sense of purpose and direction. He is now almost ready and prepared to face up to the physical challenges which life has dealt him and to tackle them head on, for the sake of his ‘family’

Way-Ray, having had his short life turned upside down, is, with the seemingly unending resilience of the young, far more accepting of the situation into which he has been thrust. His faith and trust in both Kate and Jackson is growing daily and whilst it is clear that he will always remember his natural mother with unconditional love and acceptance, he is settling into his new routine remarkably well, with just the occasional glimpse of his inner turmoil and suffering surfacing. As a father figure has always been missing from his life, the strengthening bond and trust between himself and Jackson is touching, although Jackson is astute enough to ensure that Kate never has reason to feel excluded from their banter and exchanges.

Following the series of dramatic events, which has so traumatised and rocked this fledgling family unit and flung them together with such surprising consequences, and until some semblence of normality and stability can be maintained and their damaged lives mended, the three of them have decided to live in retreat and solitude with Evie, at her animal rescue and shelter centre.

All is not well however, as a proud, fiercely independent and stubborn Evie, who has given her all, both physically and mentally, to caring for the wounded and abandoned animals in her care, has not only financial problems in keeping the centre afloat, but has also been receiving threats from an unknown source, seeking to turn her off her land, in order to redevelop the site. The threats, it transpires, come from closer to home than Evie suspects, although her son Paul is a very small cog in a very large, powerful and totally unscrupulous organisation and fast comes to realise that he is in way over his head and is totally out of his depth.

The tension and threats build and build, like a pressure cooker just waiting to explode and the showdown, when it finally arrives, is almost the literal end-game for all of them. Trapped and seemingly at the mercy of their unknown enemy, they are all forced to face their own mortality very quickly and decisions made in a split second of time, may have far reaching consequences.

Carolyn sustains the tension and suspense with total authority, right until the very last second, when action from an unexpected source helps to save the situation and redefine everyones lives for the future.

My only observations might be: – Just how much murder and intrigue can Kate, as one person, attract in such a short space of time?  ….  And why was Paul allowed off the hook quite so easily, after all the bloodshed and sorrow he had caused?  Carolyn did begin to ‘sow the seeds’ of a reconciliation between Paul and Evie, which so clearly was much needed by the both of them and would, for Evie at least, provide her with the renewed vigour and energy to enjoy being a much loved part of the extended family she had become a part of overnight, whilst a new understanding and relationship with her own son and his family could be nurtured and hopefully brought to fruition.

However neither of these small details were in any way an issue and certainly didn’t detract from the excellent writing and storytelling skills of this consummate and perceptive author.

As ‘Sea Of Regret’ was a review request, a complimentary Kindle download was sent to me by its author, Carolyn J. Rose.