Second Chance
Against The Third Reich
by Kent Hinckley
Review 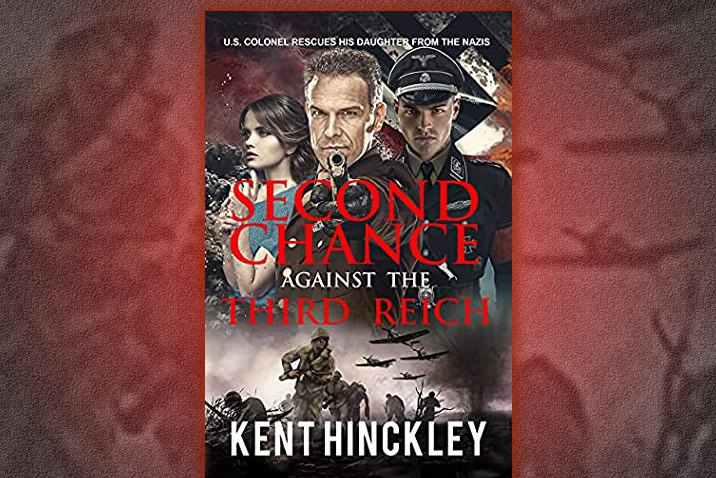 SECOND CHANCE AGAINST THE THIRD REICH 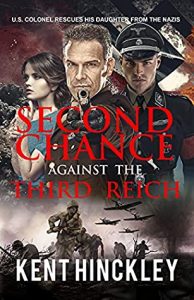 Prior to D-Day, Colonel Dirk Hoffman, suffering from shell shock (today known as PTSD), finds out from MI-6 that the Nazis will arrest his estranged daughter.

Hoffman goes behind enemy lines with the aid of the German Resistance to rescue his daughter and lead their escape from Berlin thereby incurring the rage of an SS general who is obsessed with his capture.

Hoffman and his daughter overcome incredible odds and near-death situations to reach the safety of Switzerland only to find that a mole in U.S. Intelligence has set a trap to kill them. 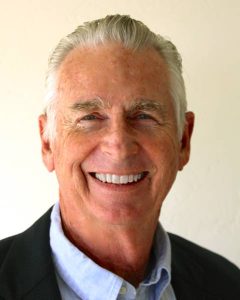 Born and raised in Palo Alto, Kent graduated from Stanford University with a degree in Political Science.

After college, he joined the Army and spent one year in Nha Trang, Vietnam, as an Intelligence officer and battalion adjutant.

Following this service, Kent worked for a large bank and eventually spent five years in Asia (Taipei and Tokyo) in International Banking.

He also worked for a stint in the real estate industry.

Kent loves reading especially history, mysteries, and thrillers, and he is now working on a murder mystery set in Nyack, New York, during 1948.

“I’m a lover of history, non-fiction and fiction, and enjoy how underdogs overcome super odds to succeed. I’ve served in Vietnam in Intelligence, so I have some experience with the military, but WW2 is so different from modern day conflicts. I love the depth of the strategies to defeat the enemies as well as the focus on taking specific targets. Those men and women definitely belong to the Greatest Generation”

“There’s always a way to do the impossible. After thirty years in the army and three wars, Colonel Dirk Hoffman followed this saying as he braced to attack the Nazis”

“Hoffman would receive  a demotion to Major subject to army approval and immediate repatriation to the United States for further assignment. His military career, while not over, had ended. One drunken outburst erased his previous achievements, but thoughts about his disgrace went to Kaye, and the shame his behaviour put on his family”

“War was painful and senseless on both sides”

“Honor makes no difference in war. A bullet reaches its target whether one has honor or not”

“U.S. Colonel rescues his daughter from the Nazis”

The outline of this uncompromising, unconventional and unique storyline held great promise, as it in part sought to spotlight a hitherto much closeted, silent illness, which has been prevalent for decades, but is only now being adequately researched, recognised and accepted, for the life-changing mental and physical devastation and destruction it can cause. So whether you recognise it as WWI ‘Shell Shock’; WWII ‘Battle Fatigue’; or modern combat ‘Post Traumatic Stress Disorder’ – PTSD, Kent has set out to make this an affirming, life- changing moment, for his main protagonist, Dirk Hoffman and the rest of the Hoffman family, who are all equally affected.

The chapters are compact and well signposted, which keeps everything moving along in a seamless, fluid way and there is no shortage of action packed sequencing, as having physically survived WWI in the trenches of the French battlefields, and made it through WWII as it begins to reach its climax and the endgame is in sight, Dirk must now go behind enemy lines to rescue his daughter and secure her safe passage out of Germany, to neutral Switzerland. This is only the tip if the iceberg though, as Dirk finds himself working alongside British MI6 to ferret out the double agent they are certain has infiltrated the German resistance, so he is never sure who to trust is really helping him in his quest to save Caroline, and who is out to kill them both in order to protect their identity.

As it turns out, no one is quite who they seem to be and trouble stalks them from the most unexpected direction. There are some wonderfully placed twists and red herrings in this multi-layered, intensely textured storyline, which kept me on my toes, although still so often getting things completely wrong! Whilst metaphorically ‘stabbing Dirk and Caroline in the back’, their most dangerous nemesis is also the person who offers Dirk some very profound and touching advice about his ongoing battle with his second ‘hidden’ enemy. His gradual healing having begun during the course of his treacherous and dangerous assignment, some very poignant scenes take place amongst the remembrance fields of France. An opportunity for closure, to expunge the massive burden of guilt which has engulfed him for so long, a moment for final goodbyes. Will healing the rift and closing the chasm he has created between himself and his family be as cathartic, and might they even dream or begin to think about starting over?

I’m afraid that for me, neither the plot, characters, narrative or dialogue, ever reached anything like their full potential, which was a real shame, as this could have been one humdinger of a story.

However, reviews and recommendations can be very subjective, as no two people will read the same book, take an identical journey, and leave the experience with exactly the same thoughts; so I suggest that you accept my comments as my personal opinion only, and please decide for yourself if this book is a good fit for your own reading schedule.

A complimentary review copy was supplied by Kent’s marketing representative.

I personally do not agree with ‘rating’ a book, as the overall experience is all a matter of personal taste, which varies from reader to reader. However some review sites do demand a rating value, so when this review is posted to such a site, it will attract a considered 3 out of 5 stars!