Thanks to Sarah, representing publisher Bookouture, for saving me space on this ‘Books On Tour’ schedule.

Also to the NetGalley team for making the download so easy. 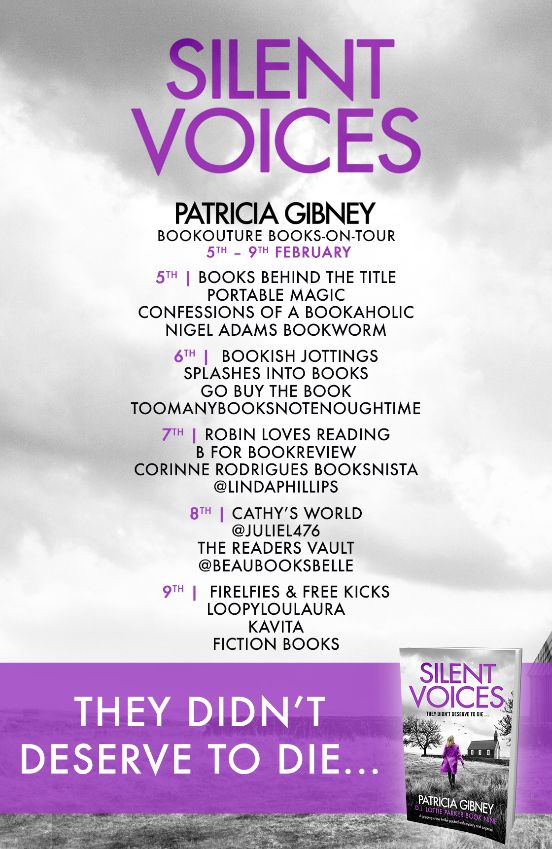 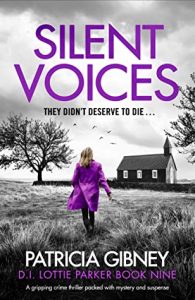 When twenty-five-year-old Rachel Mullen is discovered murdered in her own bed by her devastated twin sister, the morning after a glittering party, it’s a chilling new case for Detective Lottie Parker. Rachel’s freckled face is bruised and broken, a shard of glass placed in her throat… Faced with such a horrifying murder, Lottie wastes no time in pursuing every clue.

Many of Ragmullin’s most important people were at the party, and Lottie risks angering her boss if she doesn’t tread carefully.

Then a brilliant young doctor is found murdered with glass in her throat. The doctor was nowhere near the party and a devastated Lottie is forced to question everything. Two beautiful young women with the world at their feet have been brutally silenced. Why did the killer need them to die?

Desperate to find proof of what really happened to Rachel that night, Lottie’s search brings her to a vulnerable teenage girl, Maddy, who was waitressing at the party. But just as Lottie is close to uncovering a key piece of evidence, Maddy is seen disappearing into an unmarked car.

Will Lottie be able to find the frightened fifteen-year-old or will she too be silenced forever? 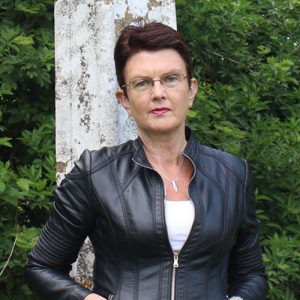 Patricia Gibney lives in the Irish midlands with her children and is the bestselling author of the DI Lottie Parker series.

She yearned to be a writer way back, after reading Enid Blyton and Carolyn Keene and even wanted to be Nancy Drew when she grew up. She has now grown up (she thinks) but the closest she’s come to Nancy Drew is writing crime!

In 2009, following the death of her husband, Patricia retired from her Public Service job, and started writing seriously.

Fascinated by people and their quirky characteristics, she always carries a notebook to scribble down observations.

Patricia also loves to paint in watercolour and quite enjoys her own company.

“I love reading police procedural novels, especially a series. I can invest my time in the main characters, watch how they develop and I always want to see what is going to be thrown at them next and how they handle it. When I created Lottie Parker I placed her in a police setting in order to be able to develop her character, her family and colleagues through a series of novels”

“The boy tried not to cry. He’d thought he knew the way home, but now he wasn’t so sure”

It might only have been built in the last ten years but the little chapel house looked like it dated back to the time when the monks set up the first Christian churches in Ireland. At a push it held a hundred people, but today it was laid out for less than thirty”

“The night was silent, birdsong no longer audible in the air. The birds had flown to warmer places, Ellen thought, as her feet squelched through the soggy dead leaves”

“Exhaling her held breath, Lottie walked around the bed as SOCOs moved out of her way. She felt her head contract and a fuzzy feeling prickled behind her eyes. The atmosphere was brimming with a malignant presence. If she believed in the devil, she was sure he had visited this young woman”

“Her mother fussed over her, which was nice because the little girl had never before been made a fuss of. And that was when she realised something profound. Though she lived in a large house full of people, she was always alone”

“They didn’t deserve to die”

Wow! What more can I say about the adrenaline rush and angst reading this story has caused! I feel like I have been chewed up and spat out! (in a good way, of course)

Over time, as I have been blog hopping and visiting the various site listings, I have come across several of the earlier books in this series, and I truly only wish that I had knuckled down and read them in their entirety, rather than leaving it until book #9 to make Lottie Parker’s acquaintance, as she is definitely my kind of woman, although I’m definitely not such an untidy and messy worker as she is! Having said that, Silent Voices is a totally self-contained story and from my personal perspective, worked great as a stand-alone, with any relevant backstory information working its way to the surface at the right time and in the right place.

The opening page drew me right into, whilst the intense, highly toxic and horrifying storyline held me in thrall until I almost forgot to breathe, and the ending was both explosive yet rather satisfying, at one and the same time. Oh! and that fourth criteria essential for a storyline like this – you can’t be dead – which Lottie only just about manages by the skin of her teeth!

Patricia Gibney definitely knows how to build a multi-layered, nail-biting, complex plot, which left me with just about everyone on my suspect list, and had me first crossing them off, then adding them back in, throughout the story, as the many twists and turns kept unravelling and changing the dynamics at a great rate of knots! The gripping storyline was well constructed, rich in atmosphere, detail and tension, with enough suspense to cause serious health issues for any reader, along with all those well-place red herrings which tripped me up time and again!

There was some skilfully written, intensely troubling and powerful narrative and dialogue, which was seamlessly woven together with authority and total confidence into a disturbing montage of human behaviour, which when unpicked, uncovered, touched on, and highlighted, so many of the social mores and issues of our times. Sorting out fact from fiction, the innocent from the guilty and the troubled from the aggressor, was a minefield of lies and deceit, which was emotionally draining and physically dangerous, often making it almost impossible for Lottie and her team to see the wood for the trees, through the many individual agendas and the maze of menacing thoughts and actions perpetrated by this cast of disparate characters.

The characters definitely make this story, in equal part with that highly textured plot. Leaving Lottie and her team of detectives aside for a moment, the remainder of this rather sprawling, multi-faceted cast were almost exclusively either physical or emotional wrecks, and often both! They led complex lives, mostly below the radar, lying came as second nature to them, and hidden agendas were accepted as the norm. Even those deserving of some support and help, really did nothing to endear me to them, or sad to say, made me want to invest in them. In fact they were so well defined and drawn in fully immersive and descriptive technicolour, that most of them made me cringe and feel the urge to jump into a cleansing shower as soon as they had left the room!

Lottie herself is a very down to earth, middle-aged widow. She doesn’t suffer fools gladly, is definitely not averse to more than the occasional burst of bad language and is unreservedly outspoken in her thoughts about both her suspects, her team (including the man she is about to marry), and her superiors. She is a fierce defender of her children, although never so much that they don’t get a tongue lashing if she thinks they deserve it. I simply couldn’t make my mind up whether she cared two hoots about her team or not, and it looks as though, with the exception of her fiance Boyd, she is about to discover that she perhaps doesn’t know any of them as well as she thought she did! Between them, they have almost as many hang-ups and emotional complexities, as their counterparts operating on the other side of the thin blue line, however Lottie is usually so busy running around chasing her own tail, rather than working through things methodically, that she really hasn’t noticed their shortcomings and may not until it is too late. But by sheer tenacity, grit, determination and downright bloody-mindedness, she gets things done!

In the town of Ragmullin, “Revenge is definitely a dish best served cold”