A rare event for me, this book was read and my review is being posted, as my spot on the Blog Tour.

I can’t recommend this series highly enough and can’t wait to read the next story, so thanks go as always to the lovely folks at Aria Fiction and NetGalley, for making this all possible.

As you can see, my spot is quite near to the end of the Blog Tour, so I strongly suggest that you try and catch up with a few of the earlier posts, where no doubt my fellow bloggers will have shared some excellent extracts, guest posts and features.

When one-hundred-year-old Violet Ross is found dead at Eden’s End, a luxury care home hidden in a secluded nook of the Lake District’s Eden Valley it’s tragic, of course, but not unexpected.

Except for the instantly recognisable look in her lifeless eyes… that of pure terror.

Becca Reid reports her suspicions to her old flame, DCI Jude Satterthwaite, and the resultant post mortem shows that Violet Ross was smothered in her chair.

DCI Jude Satterthwaite heads up the investigation, but as the deaths start to mount up it’s clear that he, and DS Ashleigh O’Halloran need to uncover a long-buried secret before the killer strikes again…

“Life flashed before her eyes like a drunk’s story, a random sequence of unconnected events without form or theme.

She was a fighter, determined each breath wouldn’t be her last, but even as she clung with frail fingers to the strong wrists that held her down she was troubled by how swiftly her dreams and her dramas sped away. Image by image, she clawed them back and forced them to make sense …”

MEMORABLE EXTRACTS SELECTED FROM THE PAGES OF THE BOOK

“Forgive me, she pleaded with his ghost. It was because I loved you.”

“Relationships came and went and marriage, her one flirtation with optimism, had proved yet again that it was better to be cynical.”

“Violet also said she’d be better with no man than the wrong one. That’s probably sounder advice.”

“All the evidence suggests she died of unnatural causes. Age doesn’t take away your right to justice. Don’t you think?”

“Some people were like that, doomed by their past to sabotage their future.”

“At a time when she thought she had things under control, it could be a risk to look too closely at the situation, to have to consider the down side of life as well as the up, but that was part of wisdom – understanding there was a cloud for every silver lining.”

“Or he couldn’t stay away from the scene of the crime.’ It never ceased to amaze Jude how often criminals gave themselves away by their fatal inability to keep away.”

“Jude could never quite understand the romantic appeal of the criminal, but it was there before his eyes. Maybe, in the final reckoning, being popular and charismatic – which Adam unquestionably was – was stronger than the fundamentals of fairness and morality.”

I have to confess that having taken part in the Blog Tour for Death By Dark Waters, the first episode in the Jude Satterthwaite series, that book is now still languishing in my TBR pile, along with so many other excellent novels, which arrive much more regularly than I can ever hope to read them!

I was therefore a little sceptical about jumping into the series with the second book, just in case there was a backstory which was pivotal to the ongoing storyline. I was however, pleasantly surprised to quickly discover that although there are indeed a couple of very strong secondary stories set to continue on through the series, author Jo Allen has made it easy, with some quite concise and clever narrative, to bring me right up to date with events very quickly and without impinging on Jude’s latest case too much, meaning that Death At Eden’s End, works just fine as a stand alone story.

The storyline isn’t too frenetic or fast paced, although it does move along steadily and there are several unexpected twists and turns, some of which were quite touching and emotional, many of which I definitely never saw coming, all of which made me never quite 100% sure who the murderer really was, right up until the reveal!

With a definite maturity of writing giving Death By Dark Waters the feel of a typically British, ‘classic’ crime thriller, all the action, with one or two exceptions in the narrative, takes place in one very small confined geographic area. The cast of characters, almost without exception, are vulnerable to one degree or another, with secrets to hide and whilst none are particularly enigmatic or engaging, all are suspects in this most bizarre of murders.

As with every other detective, both fictional and I strongly suspect in reality, Jude Satterthwaite leads a very chaotic and complicated life, which has left him damaged and struggling to reconcile his private and professional life, especially when they are practically one and the same thing! There are times during the course of this investigation, when professionalism has to fight really hard to come out on top, even more so by the time the case has been closed, leaving me to wonder how author Jo Allen is going to move things forward when duty calls for Jude and his team again!

A complimentary download of this book, published by Aria Fiction, was kindly made available and supplied by NetGalley. 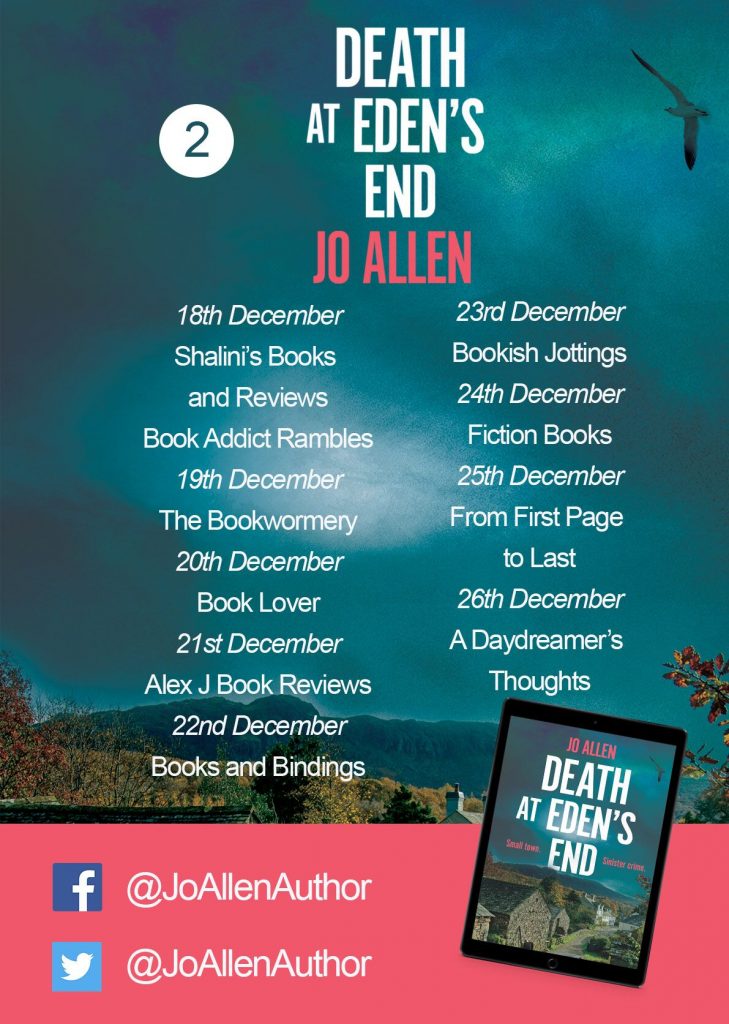 Written by Yvonne
6 comments
“They took everything. Now she’s found them.”
‘Angel Avenger’
Author Tim Wickenden
The Review
FacebookTwitter
“Being a madam comes with responsibilities”
‘Ruby’
by Heather Burnside
The Blog Tour