Stay calm, keep smiling, and watch your step. In this marriage of secrets and lies, nothing is what it seems.

For days, all of Denver, Colorado, has worried over the fate of a missing child, little Tanner Holcomb. Then, a miracle: handsome, athletic Johnny Bradley finds him, frightened but unharmed, on a hiking trail miles from his wealthy family’s mountain home.

In a heartbeat, his rescuer goes from financially strapped fitness trainer to celebrated hero. The heat of the spotlight may prove too much for Johnny’s picture-perfect family, however. His wife, Veronica, despises the pressure of the sudden fame, afraid that secrets and bitter resentments of her marriage may come to light. And she’s willing to do anything to keep them hidden.

But when a shocking revelation exposes an even darker side to Tanner’s disappearance, Veronica realizes that nothing in her life can be trusted. And everything should be feared. 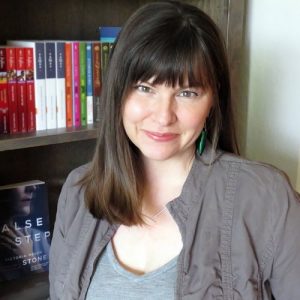 Victoria Helen Stone, formerly writing as USA Today bestselling novelist Victoria Dahl, was born and raised in the flattest parts of the Midwest.

Now that she’s escaped the plains of her youth, she writes dark suspense from an upstairs office high in the Wasatch Mountains of Utah.

She enjoys summer trail hikes with her family almost as much as she enjoys staying inside during the winter.

Since leaving the lighter side of fiction, she has written the critically acclaimed, bestselling novels Evelyn, After; Half Past; Jane Doe; and this, her latest Amazon Charts bestseller, False Step.

“ARE SUSPENSE AND ROMANCE REALLY SO DIFFERENT?”

“Love stories and scary stories are opposites for a reason: They’re flip sides of the same coin. They each tap into the most basic human drives: to survive and to mate.”

These are just a couple of extracts from a recent, interesting and intriguing article written by Victoria. You can read the full text here …

“The man jogged through the parking area of a mountain trailhead, his blond hair wild and disheveled, a dead leaf caught in the golden waves. The small body in his arms bounced with each step. A young child, two or three years old, limbs disturbingly limp. It was difficult to tell much more past the jittery movement of the camera and the shadows of pine trees cutting lines of darkness across the scene.”

“As for that one time? Well, she’d forgiven him. Or thought she had. It turned out that frantically gluing the broken pieces of a marriage back together didn’t make for the tightest hold. The seams had eventually given way and left her sitting in a giant, messy pile of hurt and anger and memories.”

“The world didn’t stop turning, no matter what happened. Even during the darkest tragedies life went on, unaware and cruel, completely unconcerned with whether you could manage to catch up.”

“She’d done everything wrong. She’d tried to improve her unhappy life with one man by turning to another.”

“In this marriage of secrets and lies, nothing is what it seems.”

Right from the first few pages I had this one all worked out – or at least I thought I did! But then my list of suspects and motives grew, morphed and changed, with all not becoming clear until right towards the end and then still not preparing me for the explosive endgame and its life changing aftermath!

Once again, before commenting any further, I would reiterate that all views expressed here are purely personal, which is what makes reviewing rather a subjective exercise, as no two people will take away exactly identical experiences and thoughts from reading the same book.

I notice that reviews for False Step have been very mixed and having checked out Victoria’s alternative author persona, I do feel that perhaps the edges between the two styles and genres of storylines she writes, are rather blurred. However, having read Victoria’s recent blog post about that very subject, I can see why that might indeed be the case, although it maybe a little disconcerting for specific genre readers.

Victoria is very much of the opinion that…

Because I like to read a real mixed bag of genres, I managed to switch my reading expectations when I realized what was going on with the narrative. However, I would suggest that if you are looking to False Step for an intense, fast-paced thriller, reading experience, then this might not be one for you. That is not to say that the action episodes, when they do occur, aren’t nail-biting and creepy!

The plot, sick and disturbing though it was, wasn’t really too difficult to work out, although all the ‘whys and wherefores’ did not come to light immediately and certainly not as a result of any police activity or enquiries, which all seemed rather lacklustre and half-hearted.

I couldn’t really say that I liked any of the characters particularly, or if I am perfectly honest, felt much sympathy for any of them, with possibly Sydney, a ten-year-old child being the most honest and open of them all! They were all too busy playing mind games to realise the mental cruelty and suffering they were inflicting on themselves and each other.

Everyone apart from Sydney, had more hidden secrets, suspect past histories, double dealings and emotional baggage, than I as a mere bystander had the capacity to absorb! They were all so self-centred, selfish, secretive, demanding and downright weak willed, that none of them really deserved my understanding or empathy. Not one of them had the maturity to deal with their responsibilities and life in the real world, with Sydney unwittingly being used as a pawn in all their various scheming and machinations, as if that could somehow justify their irresponsible actions.

As it was, my 4 stars for this highly character driven story, were awarded for Victoria’s deep and probing narrative into Veronica’s complex character and emotional turmoil, even though there were times when I just wanted to slap her and call her out for her double standards!

Throughout the entire story Veronica seems to do an inordinate amount of whinging, whining and bemoaning about her little lot, whilst her own dirty little secret has more than enough potential to ruin both hers and her daughter Sydney’s future. Scratch the surface though to break through the barrier that Veronica has built up so carefully around the two of them, read between the lines of diatribe she verbalizes about to almost everyone around her, and you will eventually peel away enough layers to get to the basic insecurities which have overtaken her thinking and the sense of belonging and being valued, she is so desperately seeking.

Thoughts and feelings she has steadfastly held in silence since childhood have meant that now, as an adult, she is still making those same mistakes and bad choices, especially in this potentially life and death situation, which she just doesn’t see coming. Maybe if she had been happy with her own family unit as it was, instead of reaching out for something which seemed that little bit more exciting and ultimately unattainable, she would have found the inner happiness to enjoy the life she had, to the full.

Without giving anything away, perhaps this, her final choice, will finally set her free to begin again!

A complimentary download of this book, published by Lake Union Publishing and promoted by Little Bird Publicity, was kindly made available and supplied by NetGalley.