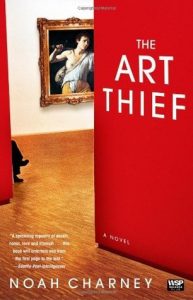 Rome A magnificent Caravaggio altarpiece disappears at dead of night.

Paris In the basement vault of the Malevich Society, curator Genevieve Delacloche is shocked to discover that one of its greatest treasures has vanished.

London The National Gallery’s newest acquisition is stolen just hours after it was purchased for £6.3 million.

As three separate investigations get underway, Inspector Jean-Jacques Bizot in Paris and Harry Wickenden of Scotland Yard begin to suspect that what at first appears a spate of random thefts is nothing of the kind.

Pursuing a dizzying trail of false leads, bizarre clues and double-crosses across Europe, the detectives’ only chance of uncovering the truth is to band together to outwit an ingenious criminal mastermind with his own mysterious agenda. 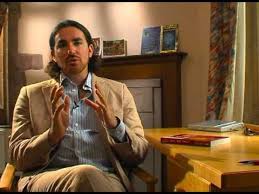 Noah Charney holds a Masters degrees in art history from The Courtauld Institute and University of Cambridge and a PhD from The University of Ljubljana. He is Adjunct Professor of Art History at the American University of Rome, a Visiting Lecturer for Brown University abroad programs, and is the founder of ARCA, the Association for Research into Crimes against Art, a non-profit research group on issues in art crime

His work in the field of art crime has been praised in numerous forums and he has appeared on radio and television as a presenter and guest expert.  He is in constant demand as a lecturer, has given popular TEDx talks, was a finalist for the main TED event, and teaches a Guardian Masterclass called “How to Write About Art.”

Noah is the author of many academic and popular articles, contributing regularly to several publications. He is the editor of an academic essay collection entitled Art & Crime: Exploring the Dark Side of the Art World and is author of several critically-acclaimed works of non-fiction.

The Art Thief is his debut novel.

He lives in Italy and Slovenia, and lectures internationally in the subjects of art history and art crime.

Catch up with all Noah’s latest news on his website

“Rejection has nothing to do with the quality of your work. If you believe in your product, it’s just a matter of time before someone publishes it. My trick was this: send out ten letters to agents or publishers. Each time you receive a rejection, send out another three. Repeat until you’ve achieved what you desire”

“The best thieves are honest and professional, never mistreating unless mistreated, cautious but never rude. High class thieves are self-righteous, recognize their own value and the value of trust, even in crime”

“Look deeper. Observation Harry. We can make a conscious choice to see, not just to look at. Passive versus active viewing. Observation and logical deduction, the two tools that everyone has, and no-one uses”

“Great suspense and attention to detail, although some genre confusion”

Well! where to start with this review ? …

I guess this is one of the best examples I have come across, of why book reviewing can be such a subjective process and so personal to the reviewer.

‘The Art Thief’ has received some very mixed reviews, not all of which have been objective, or even particularly pleasant to read, if you were author, Noah Charney. Nonetheless, if they are comments which indicate the true feelings and thoughts of their authors, then they should be respected and considered.

Personally, I did have one or two reservations about the book … Namely that the paperback edition I read from, had print so small that I almost needed a magnifying glass to see it, consequently it seemed to take forever to read and was not quite as absorbing as it might have otherwise been … Also, at one point, just a few pages in, I felt so bogged down by art terminology and description, that I did wonder if I would be able to finish reading, if the remainder of the story was written in the same vein …

The background detail was actually brilliant. I learned more about art history and art crime, than I would have thought possible from a work of fiction. The book raised some serious questions about morality and crime, with some great insights into the slightly seedy underworld dealings of international art thieves. Perhaps some aspects of art theft may have a little romanticised for the purposes of the story, but read between the lines, scratch a little beneath the surface and the true ‘grubby’ nature of the crimes and the perpetrators, are clearly described in meticulous detail. Also, given that this crime involved three simultaneous lines of enquiry, in England, France and Italy, perhaps a little romantic license is permissible.

As the story was written from so many different points of view, far from feeling overwhelmed, I felt a great affinity with the characters by the end of the book, as both the physical and emotional details about the main players was so well documented. Noah had gathered together, what would seem at first glance, a more diverse, quirky and ill-matched assortment of crime solvers, than you could ever wish to meet and yet somehow, it worked beautifully. The synergy between these slightly competing factions, was at times difficult to keep up with and yes! perhaps some of the characters were a bit larger than life and possibly more suited to a ‘mystery caper’, rather than a serious mystery enquiry. Taking just one of the characters and making that person the focal element of an investigation, would probably help in the development of a successful serious series, if that’s where Noah anticipates taking his work.

There were more intriguing bluffs and double-bluffs, than you would have thought possible in one case, with twists in the plot coming thick and fast. I would have said that overall, the book put more emphasis on the chase than the crime, making it a real edge of the seat read, with the final, surprising, sting in the tail being saved until the very last page. With an end as complicated as it was surprising and which left me still wondering whether everyone had really got what they deserved, yet somehow satisfied with the outcome.

Noah Charney is certainly one author who writes about what he knows best and is clearly passionate about both his work and writing. Whilst this obviously shines through in the authenticity and detail he adds to the premise of what could have been a five star crime story, I have this niggling worry that the balance just wasn’t quite right somehow … Perhaps it was just a little too complicated, as if Noah had tried to include too many points of information, almost wishing that he had made himself one of the characters assigned to solving the case.

I still think that ‘The Art Thief’ was a 5 star read, because for me personally, all the ingredients of an interesting and unique crime series are there, it is simply a question of getting the balance of the ingredients right and for Noah to nail down whereabouts in the marketplace he is aiming to position his fiction writing, to make it as successful as the many non-fiction papers and books he has authored.

I personally do not agree with ‘rating’ a book, as the overall experience is all a matter of personal taste, which varies from reader to reader. However some review sites do demand a rating value, so when this review is posted to such a site, it will attract a 5 out of 5 star rating